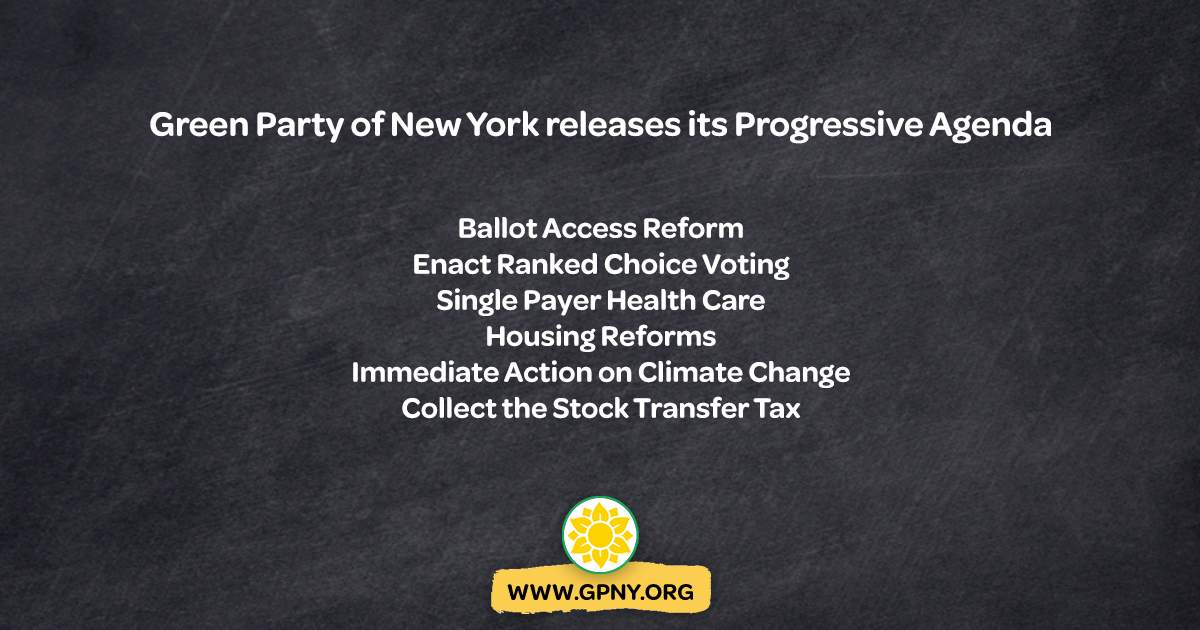 “Democracy continues to be in a fragile condition in New York and nationwide, with both parties engaged in corruption and suppression of democratic rights. Cuomo used the cover of COVID to kill independent small parties in the state budget. We demand the so-called progressive Democrats with a Legislative supermajority who told us they opposed what was happening to have the courage to stand up and do what is right for New Yorkers. That includes raising the taxes on billionaires and other rich New Yorkers to close the massive budget deficit from COVID,” said  Gloria Mattera, state party co-chair.

“Governor Hochul has proposed building up to a million new housing units over the next decade. As a party we agree that housing reform is absolutely necessary, but subsidizing private real estate wealth will not solve the dire housing crisis, nor will it address the 89,000 units of affordable housing landlords have kept off the market in New York City. We need a committed program of public social housing that provides a million units for working-class and middle-class families across the state. Additionally, we need to pass strong tenant protection like rent control, good-cause eviction, and legalizing Accessory Dwelling Units (ADUs) to shift away from the bankrupt suburban, single-family home model,” added Mattera.

“The climate emergency is at a crucial point. We must solve the climate crisis so that our children have a chance for a decent future. The Green New Deal, which we first called for in Howie Hawkins’ 2010 gubernatorial race, will also meet the economic needs of our state’s residents. Single payer health care would reduce overall healthcare spending while ensuring that everyone’s health care needs, including COVID, are met,” said Mark Dunlea, the new Co-Chair of the EcoAction Committee of the U.S. Green Party.

In addition to funding Green New Deal initiatives, the Greens support strengthening the climate law Cuomo signed a year ago to speed up the timelines. President Biden for instance has proposed a timeline for 100% clean electricity 5 years faster than  New York’s 2040 goal. The Greens want a target date of zero emissions as soon as possible (2030), rather than the 30-year goal under the state law, which would still allow emissions to be 15% of 1990 levels. The Greens back an immediate halt to all new fossil fuel infrastructure, increased public ownership and democratic control of the energy system and a robust carbon tax in all sectors to make polluters pay for the damages they cause with fossil fuels.

The Greens have also been long-term proponents of stopping the multi-billion dollar annual rebate of the Stock Transfer Tax. “It is long past time we make the rich pay their fair share of taxes, instead of making New York the long-time leader in economic inequality. We won’t solve the climate crisis or systemic racism or a host of other social problems until we embrace ecosocialism, putting the needs of average people and the planet ahead of the profits and well-being of a few,” said Peter LaVenia, state party co-chair.