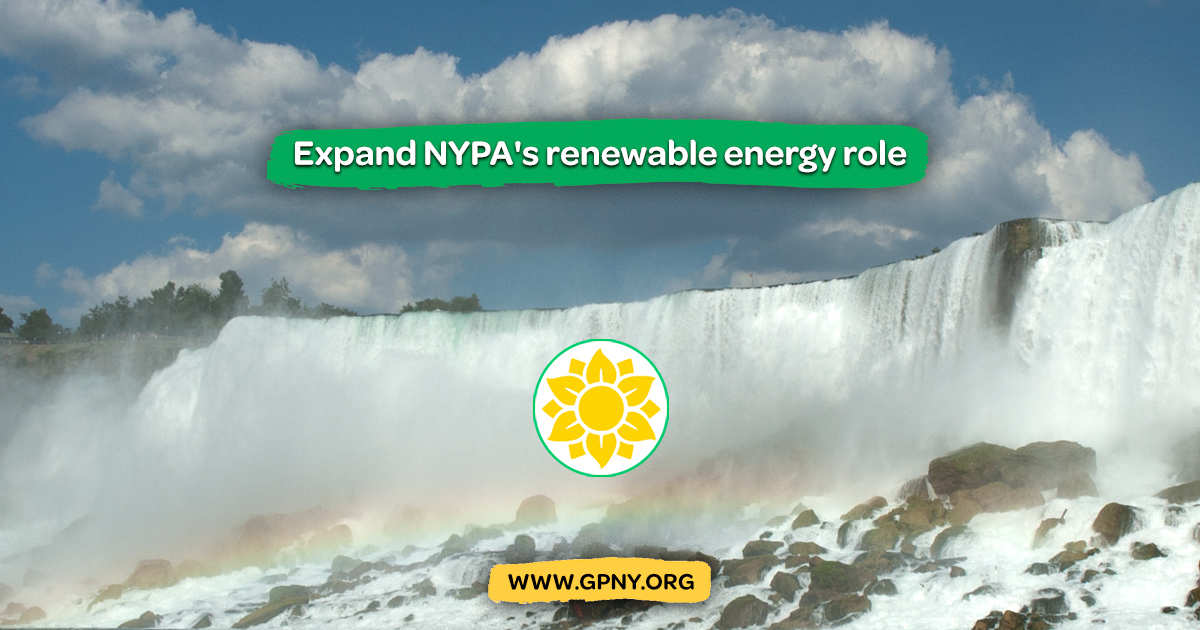 ALBANY — The Green Party of New York today urged state legislative leaders to drop their opposition to the Governor's budget proposal to expand the role of the New York Power Authority (NYPA) in developing renewable energy, including providing electricity to CCAs (Community Choice Aggregation) and other public entities.

"With time running out to save life on this planet from catastrophic climate change, this is not the moment for state lawmakers to focus on protecting the profits of private developers of renewable energy. This needs to be an all-hands-on-deck moment. Public ownership of renewables would speed up their development and reduce costs for consumers," noted Peter LaVenia, state party co-chair.

A more expansive proposal by the Governor last year to allow NYPA to directly own renewables was rejected by the legislature.

During the recent statewide elections for Governor and State Comptroller, the Greens called to significantly expand pubic ownership of renewables and energy systems beyond that which Cuomo has proposed. Public ownership of renewables has been a key factor in the success in other countries such as Germany in expanding renewables. Public pensions have been a significant factor in Europe's rapid deployment in off shore wind while the US has only one small boutique system off of Block Island.

The Green Party has called for public ownership of the transmission system since the present inefficient patchwork private system remains a major roadblock to the transition to 100% clean energy. The Greens called for the state to provide funding to any municipality willing to site and build large-scale renewable energy systems. The inability of most private developers to obtain approval to site such facilities is a major factor in the state's anemic development of renewable energy; wind and solar account for less than 5% of the state's electricity.

The Greens rejected the statement by the chair of the Senate Energy Committee, Kevin Parker, that "We wanted to be clear that we are not having NYPA do anything that the market should be doing."

"The market is responsible for climate change and bringing us to the point where the very survival of the human species is now in question. Continuing to allow our energy system to be driven by the maximization of profits by private developers is signing our death warrant. It is time for eco-socialism where our energy system is democratically controlled and owned and the focus is meeting the needs of both humans and nature," added Gloria Mattera, State party co-chair.