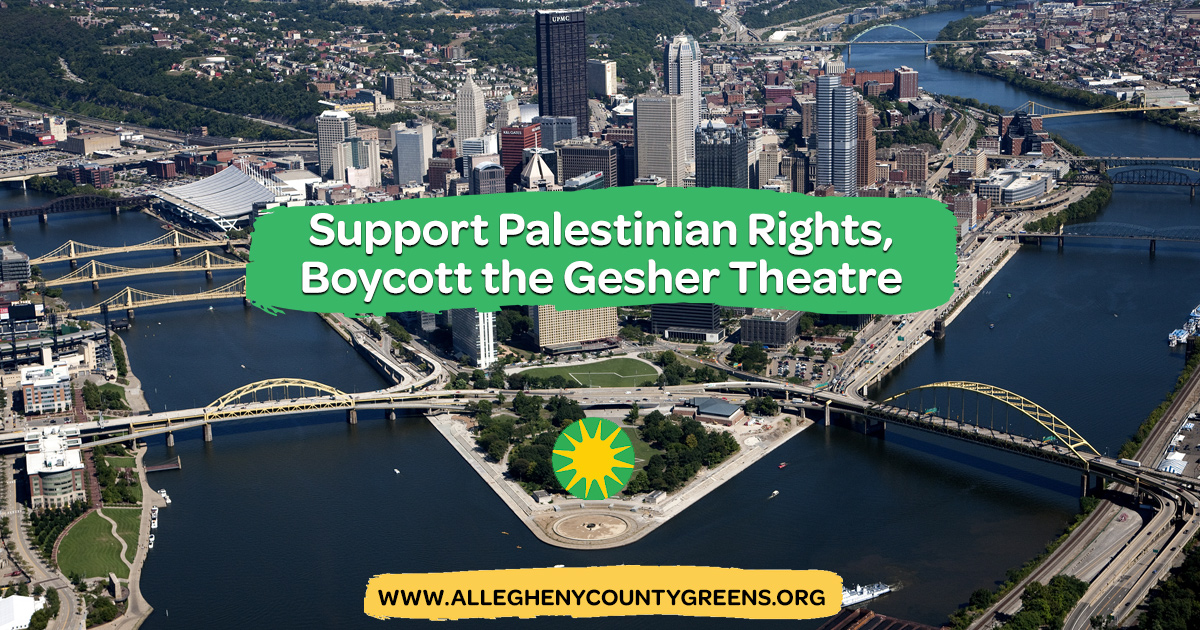 The Green Party of Allegheny County (GPOAC) endorses the Israel Gesher Theatre boycott and calls on the Pittsburgh Cultural Trust to respect the boycott and cancel the upcoming Gesher Theatre performances. The boycott is meant to call attention to Israeli Ministry of Foreign Affairs funding for the theatre as a way of diverting attention from violations of Palestinians’ human rights.

GPOAC encourages all local Greens to attend the planned demonstration on opening night in Pittsburgh on October 11 at the August Wilson Center.

The full text of the letter being sent to the Pittsburgh Cultural Trust may be found below, and online.

Further background information about the theatre and the boycott may also be found online.

Harvey McCue, Board Chair, Ontario Heritage Trust
Maria Shclover, Board Chair, Cherry Orchard Festival, New York City
J. Kevin McMahon, President and CEO, Pittsburgh Cultural Trust, Pittsburgh
Scott Shiller, Festival Producer and Vice President of Artistic Planning, Pittsburgh Cultural Trust, Pittsburgh
Dear Mr. McCue, Ms. Shclover, Mr. McMahon, and Mr. Shiller,
We are supporters of the arts and social justice, writing to express serious concern about the fact that the Ontario Heritage Trust in Toronto (September 29, 30), the Cherry Orchard Festival in New York (October 3, 4, 6 and 7), and the Pittsburgh Cultural Trust (October 11-13), will be hosting performances by the Gesher Theatre of Israel, performances that the Gesher Theatre and your own websites say are sponsored by Israel’s Ministry of Foreign Affairs. These performances support the Israeli government in implementing its systematic “Brand Israel” strategy of employing arts and culture to divert attention from the state’s decades of violent colonization, brutal military occupation, and denial of Palestinian refugees’ right of return.  In addition, Gesher Theatre itself has been complicit in Israel’s violations of Palestinian rights, as we describe in more detail below. Therefore we call on the Ontario Heritage Trust, the Cherry Orchard Festival and the Pittsburgh Cultural Trust not to host the Gesher Theatre, or partner with the Israeli government.
In 2006 Israel’s Ministry of Foreign Affairs (MoFA) launched its “Brand Israel” public relations strategy, with the aim of “rebranding” Israel by representing the country as “relevant and modern,” a progressive center of the arts and culture, while “avoiding any discussion of the conflict with the Palestinians.” This was articulated by a MoFA official who, following one of Israel’s periodic military assaults on the Gaza Strip,told the New York Times, “We will send well-known novelists and writers overseas, theater companies, exhibits … This way you show Israel’s prettier face, so we are not thought of purely in the context of war.”
The support for these performances by Israel’s Ministry of Foreign Affairs that your organizations and the Israeli government are advertising fits exactly within that Israeli government PR strategy. Today the Israeli government is attempting to divert attention from its killing of over 150 unarmed Palestinian protesters in the open air prison of Gaza; its planned demolition of the West Bank Palestinian village of Khan Al Ahmar, a potential war crime according to the EU; and the official enshrinement of Israel’s apartheid rule over Palestinians through the new Nation State Law.
On top of this, the Gesher Theatre is actively complicit in the occupation and colonization of the West Bank because it performs in and thereby legitimizes illegal Israeli settlements like Ariel. Ariel settlement cuts 12 miles into the Israeli-occupied West Bank and seizes vital Palestinian land, in flagrant violation of international law. Many courageous Israeli artists have protested against performances in Ariel, and refused to appear there. Israeli artists’ protests were joined in 2010 by over 150 international theater and film professionals. Nonetheless, the Gesher Theatre puts on shows in Ariel.
The Gesher Theatre is also complicit through its silence, and failure to ever oppose Israel’s decades of repression of Palestinians, including Palestinian artists. As examples, performers and staff from the Jenin Freedom Theater have repeatedly been subject to arrest and harassment. In June 2015, the Israeli government cut funding of one theater run by Palestinian citizens of Israel, and threatened the funding of another over artistic decisions related to Palestinian rights. The Palestinian National Theater in East Jerusalem has been the target of years of persistent harassment and threats of closure by the Israeli government. In August Israel bombed a leading Palestinian cultural center in the Gaza Strip. And the freedom of movement of all Palestinians artists is frequently restricted by Israeli occupation authorities, while Israeli artists travel the world freely.
Given this context, your organizations cannot claim that hosting Gesher, with Israeli government support, is simply apolitical patronage of the arts.
We emphasize that we are not raising concerns about any artistic content, or the artists’ nationality, but rather about institutions’ structural complicity with a repressive state agenda that repeatedly violates international law. For 51 years Palestinians living in the West Bank and Gaza Strip have been subject to a regime of military occupation and colonization, and for 70 years they have lived inside Israel as unequal citizens now subject to over 50 discriminatory laws, or as refugees in diaspora, denied the right to return to their homeland as guaranteed by international law.
For these reasons we urge the Ontario Heritage Trust, the Cherry Orchard Festival and the Pittsburgh Cultural Trust to respect the Palestinian civil society call for a boycott of those Israeli cultural institutions that are complicit in the denial of Palestinian rights. This call is modeled on the global boycott movement that helped to bring an end to apartheid in South Africa. Please help to pressure the Israeli government to end 70 years of brutal repression by canceling the Gesher Theatre’s performances at your festival. We would be very happy to meet with you to discuss these issues further.
Thank you,
Tim Jones, Chair
Green Party of Allegheny County
Do you like this post?
Tweet