Green Party candidates are seeking spots on the ballot for governor, lieutenant governor and U.S. Senator 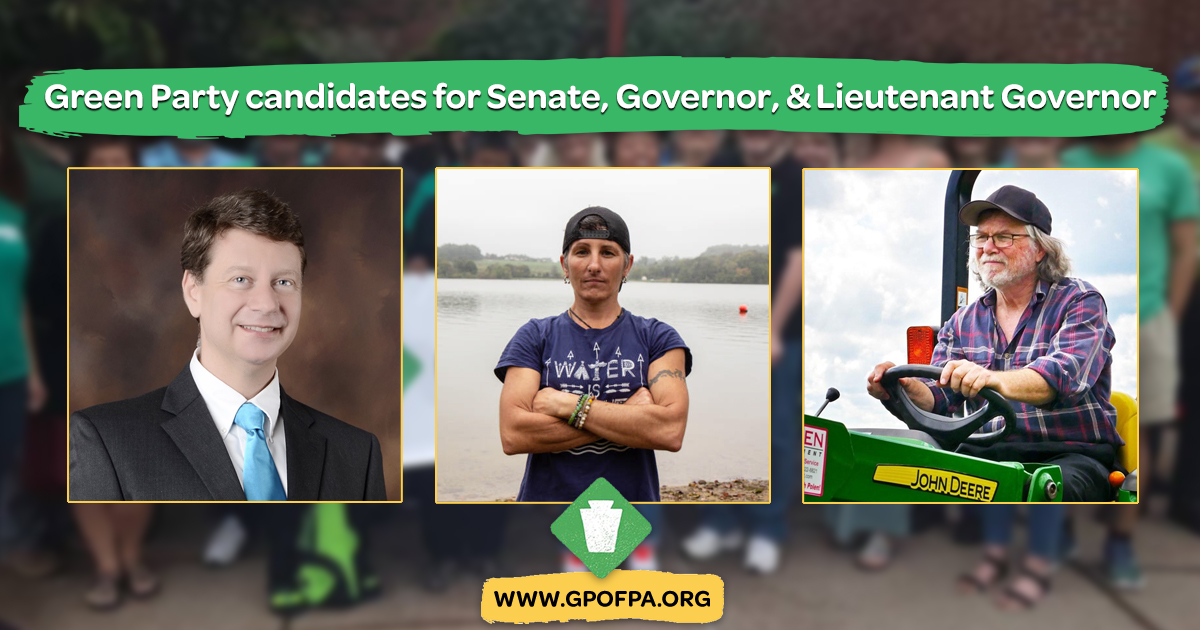 While most election talks are focused on red versus blue, there’s another color looking to get on the ticket in the commonwealth: green.

The Green Party has fielded candidates for governor, lieutenant governor and U.S. Senate in a crucial election year in Pennsylvania. Despite the lack of electoral success for third parties, the Green Party is hopeful it can get its three candidates on the ballot in 2022. The party’s platform stands on four ideals: grassroots democracy, nonviolence, ecological wisdom and social justice. The candidates are seeking to be an alternative for apathetic voters tired of the two-party gridlock in Harrisburg and Washington, D.C.

Here are the Green Party candidates seeking nomination in the commonwealth.

Digiulio, 44, a former analytical chemist for the Department of Defense, is the co-founder of the Watchdogs of Southeastern Pennsylvania and the Better Path Coalition. From Upper Uwchlan Township in Chester County, she got involved in politics as a vocal opponent of the Mariner East pipeline. City & State spoke with Digiulio in March when she first began her campaign and received the party’s endorsement. She stressed that outside of environmental concerns, the Green Party is focused on being the voice of the people rather than the voice of the party’s donors.

“It’s time to focus on the people 100%. We need basic human rights. There are people without clean water in 2022 in Pennsylvania. That’s pretty pathetic,” she said. “I think third parties give people the option of something else, and I really think it’s necessary for getting our political party system straightened out.”

Digiulio said that regardless of their electoral success, she hopes the Green Party can bring important issues to the forefront that aren’t normally talked about during elections. “If (Green politics) start to become part of the political conversation, I think that’s successful.”

Joining Digiulio in her run for Harrisburg is Badges-Canning, mayor of Cherry Valley Borough in Butler County and a former vice president of the Pennsylvania State Education Association. Badges-Canning, also a co-founder of the Better Path Coalition, lost his previous attempt to run as a Green Party candidate for state representative in the 64th legislative district. Unlike Digiulio, Badges-Canning has been involved in politics for decades. He started out on the Cherry Valley Borough Council in 1989 after one local council member died in a car accident. And more recently, he took over the role as mayor following the previous mayor dying due to COVID-19 complications. And having worked with Digiulio in the past, he said he’s thrilled to campaign with her now.

He said his time in local politics revealed how many people avoid talking about difficult issues. “When a community can talk about silly or mundane stuff, but can’t talk about someone's voice … that tells me something about the state of our communities.” He added that local government plays an important role that’s often overlooked by the media, and that his focus would be on issues affecting people’s bottom line.

“That’s a sad thing … local governments are drying up, and even we have a tough time having enough people for a quorum,” he said. “The issues close to home don’t get enough attention.”

Richard L. Weiss is a lawyer from Allegheny County who previously ran unsuccessful Green campaigns for attorney general and the Court of Common Pleas in 2020 and 2021, respectively. In the Allegheny County Court of Common Pleas special election, he received more than 41,000 votes but failed to pick up one of the 11 open seats. As an attorney, he says he supports criminal justice reforms such as ending cash bail, decriminalizing drug use and sex work and establishing citizens’ police review boards.

With the Green Party’s statewide slate set, candidates are looking to ensure their spot as minor political party nominees in November. Although third party candidates won’t be on the May 17 primary ballot, their work is cut out for them to meet signature requirements to get on the ballot. In order to secure a spot on the ballot in the general election, each candidate must obtain 5,000 valid signatures by August 1.