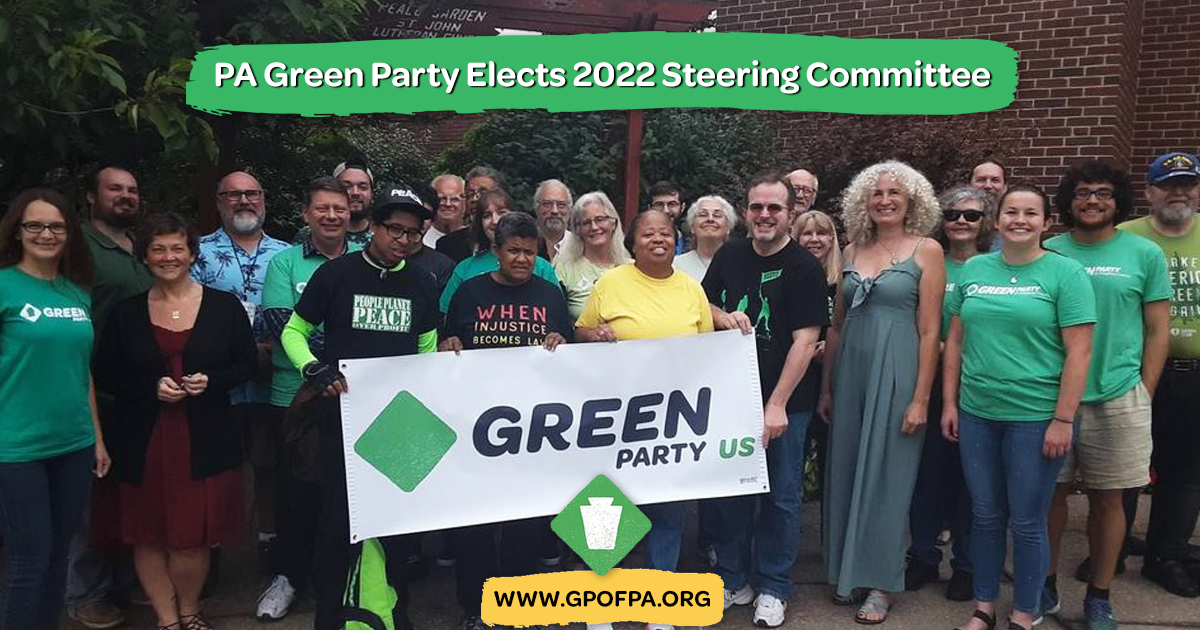 PHILADELPHIA – The Green Party of Pennsylvania (GPPA) is one of our Commonwealth’s most active minor political parties with 9,000 members. Those members are organized into county Green Parties, which elect the GPPA steering committee. On January 9, delegates from ten counties elected a dynamic steering committee to lead the Green Party during 2022.

GPPA has two co-chairs who serve for staggered two-year terms. The delegates elected Co-chair Jay Ting Walker (Allegheny County) as leader until the end of 2023. Walker has been a member at large of the GPPA steering committee and an elected member of the Green Party of Allegheny County (GPOAC) steering committee since 2017. Walker has also run twice for election as the GPPA candidate for PA House District 23.
Incumbent Co-chair Beth Scroggin (Chester County) said, “I am so grateful to Jay Ting Walker for joining me as co-chair! His energy, enthusiasm, and ideas are just what the Green Party needs to move forward this year.” Referring to other new members of the GPPA steering committee, Scroggin continued, “David Ochmanowicz (Bucks County) brings more than a decade of experience with the Green Party as well as his seasoning as an elected Green official. Beth Schongar and Claire Cohen are both accomplished, passionate women who will bring fresh perspectives to our steering committee. Overall, we will have a great team of people!”
Asked for his political forecast, Walker said, “I predict that 2022 will be a dazzling year for the Green Party. We have justice, climate science, the people, and even the PA Constitution on our side. Our only obstacles are the corporations and the politicians they have in their pockets. The Green Party will be in the streets and on the ballot, fighting for the future of every citizen of PA.”
In looking at the Green Party’s prospects, Scroggin predicted, “In 2022, I think that recruiting diverse electoral candidates for office, both at the state and local level should be our top priority. In order to recruit those candidates, we will need to build diverse memberships at the local level. Because the Green Party is entirely funded by individuals, and not corporations, we are looking for candidates who can represent the interests of people in their communities. They need not be seasoned politicians, just people hoping to bring positive change for the environment, for peace, and for socioeconomic justice via grassroots democracy.”
Asked about his plans, newly-elected Steering Committee Member at Large David Ochmanowicz said, “I am looking forward to returning to the life of an active state-wide Green after serving my community locally these last four years as elected School Director. I'd like to concentrate some of our resources on providing local Greens the opportunity to build by getting groups meeting in new counties. GPPA can provide insight, structure, education, and resources to help local grassroots leadership work cohesively with neighboring counties to thrive.”
“Young EcoSolialist (YES) Greens and a re-launch of the Campus Greens here in PA,” continued Ochmanowicz, “would go a long way toward building political awareness in the next generation of voters. Young people largely seem in line with Green Party values and our mission: to elect responsible progressive, uncorrupted politicians to serve our great Commonwealth. We will elect Green Party members to office because they will be for the people, and not for special-interest corporate donors and political parties which have little respect for a free and fair democracy.”
Newly-elected Steering Committee Member at Large Beth Schongar (Allegheny County) sees her new job similarly, "My personal goal is to help the Green Party to communicate and involve registered Greens, who have not been involved in the party except for registering and voting. I think that broader involvement of party members is needed in order to have a broader, more diverse pool of electoral candidates and campaign workers."
Walker agreed, saying, “I am putting out the call to long-time Greens who have not been active for five years or more. Please contact your friends and ask them to register Green, right now! Our strong organizers from the past, who have not been active recently, should join us in building the Green Party. I ask each of them to contact me!  We should all work together now to forge a stronger Green Party!”
To volunteer with the Green Party (as a candidate for office or as a campaign worker), please email to [email protected] or leave a telephone message at 717-839-2395. The Green Party of Pennsylvania (GPPA) is an independent political party which stands in opposition to the two corporate parties. GPPA candidates promote public policy based on the Green Party’s Four Pillars: grassroots democracy, nonviolence, ecological wisdom, and social justice/equal opportunity. For further information about GPPA, please visit www.gpofpa.org. Please follow GPPA on social media: Facebook, https://www.facebook.com/gpofpa/; Instagram, https://www.instagram.com/pagreenparty/; and Twitter, https://twitter.com/GreenPartyofPA.
For more information please see:
“Introducing the New Leaders of PA’s Green Party” by Beth Scroggin and Tina Olson. GPPA News Release, January 19, 2021,
https://www.gpofpa.org/introducing_the_new_leaders_of_pa_s_green_party
“PA Green Party Elects New Co-chair,” GPPA News Release, January 20, 2019,
https://www.gpofpa.org/pa_green_party_elects_new_co_chair
Do you like this post?
Tweet