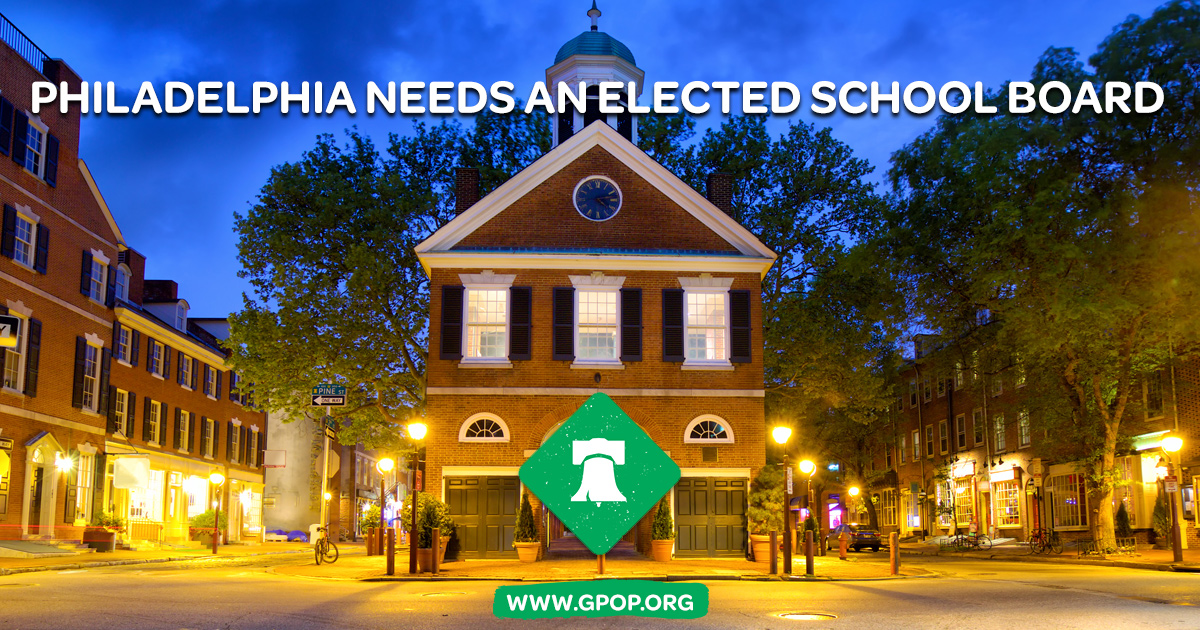 PHILADELPHIA, PA -- The Green Party of Philadelphia (GPOP) applauds the tireless work of the grassroots coalition Our City Our Schools, whose pressure led Mayor Jim Kenney to announce on November 2 that he will abolish the School Reform Commission and return Philadelphia schools to local control. The state takeover of our schools by an unaccountable body has been a failed experiment, and this victory belongs to the many community activists who made their voices heard. However, Mayor Kenney's decision to move to a model of a Mayoral-appointed board is a missed opportunity to reorganize Philadelphia's public school system under the democratic control of its students, parents, and teachers.

The Green Party of Philadelphia calls for the new Philadelphia School Board to be democratically elected by Philadelphia's voters. "To prevent a takeover by corporate interests," said Taj Magruder, a Member At-Large of the GPOP City Committee, "our school board elections must be publicly funded and must use instant run-off voting. In addition, students and teachers should have their own elected representatives on our new school board." Chris Robinson, the GPOP Membership Secretary, said, "The public school children in Philadelphia deserve an elected school board, just like the children in all of the other school districts in Pennsylvania." The Green Party of Philadelphia stands with the Our City Our Schools coalition, which is also calling for a "People's School Board -- a board made up of the students, parents and educators."

The Caucus of Working Educators, a group within the Philadelphia Federation of Teachers and a member of the Our City Our Schools coalition, noted on their website in response to the Mayor's announcement that they "did push for the conversation on [the what model should replace the SRC] to be transparent and take public input into account, calling for the creation of a citywide task force" to lead the conversation. Instead, as shown by Mayor Kenney's statement to City Council, "it seems that a decision has already been made to commit to a particular model."

In 2012, the Green Party of Philadelphia outlined a proposal for Philadelphia schools that included a series of reforms that need to be implemented to ensure that every child receives a public education that fosters critical and holistic thought, and provides the breadth and depth of learning necessary to become an active citizen and constructive member of society. In addition to calling for an elected School Board, those reforms include ending all attempts to privatize education, equalizing educational resources by challenging our discriminatory funding system in court, and ending the school-to-prison pipeline by removing "zero tolerance" policies, and ending high-stakes testing.