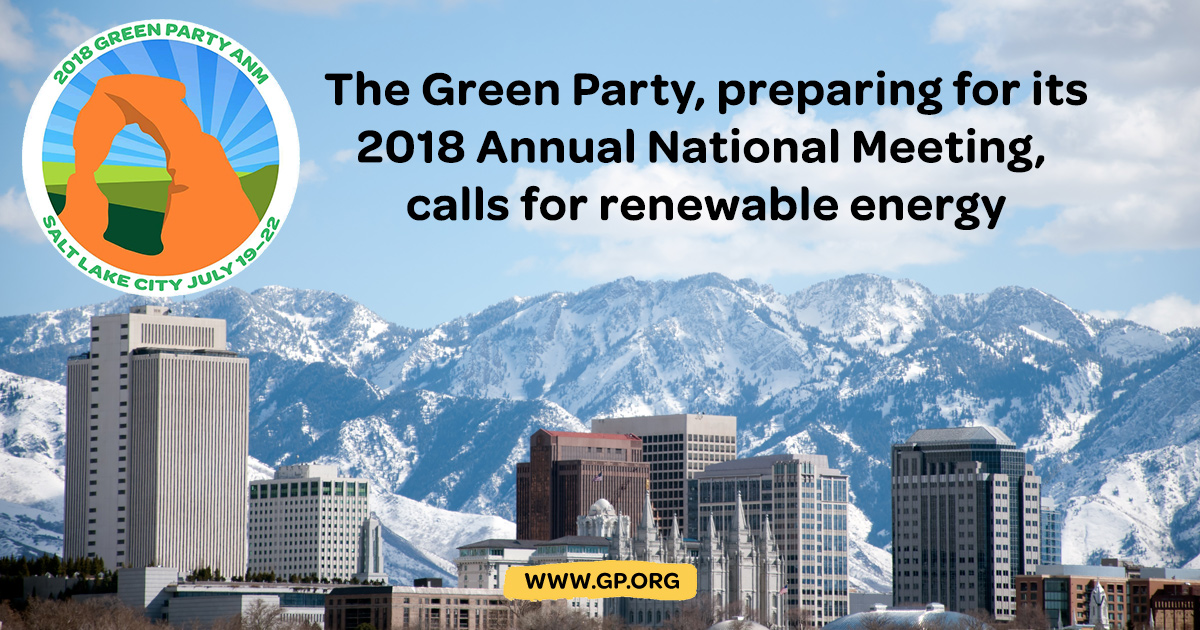 The Green Party, preparing for its 2018 Annual National Meeting in Salt Lake City, Utah, July 19-22, called for renewable energy instead of coal and nuclear in response to federal mandated coal and nuclear energy purchases.

Green Party leaders said reliance on nuclear and fossil fuels presents continuing security issues for the nation, including a profound threat to the water supply.

Utah is especially vulnerable as a target for extraction industries.

A media credentialing page is online for reporters, bloggers, and others planning to cover the meeting

Trump administration officials are advocating that energy producers be forced to buy energy from coal and nuclear plants instead of renewable energy and other types of energy for national security reasons. A May 29th confidential memo disclosed the Department of Energy's plans to mandate electricity purchases for two years from coal and nuclear plants facing retirement, decommissioning or deactivation. The memo relies on Presidential Policy Directive-21 on Critical Infrastructure Security and Resilience, released under the Obama administration, as justification for the plan.

"One of the dangers of the production and storage of coal and nuclear fuel is the waste products from mining and storing raw components for the fuel that seep into the local water supply," said Abrian Velarde, Green Party candidate for Utah State Senate from District 12. "Utah has been especially hard-hit by energy waste issues."

"The impact of mining is a very real and serious threat to our Indigenous communities," said Dee Taylor, Green Party of Utah, who recently attended the White Mesa Spiritual Walk and protest of the White Mesa Uranium Mill, the only conventional uranium mill operating in the United States. The mill is located a few miles north of the Ute Mountain Ute Tribe community. "Residents of the White Mesa Community are threatened by the potential contamination of the Navajo Sandstone aquifer, which lies underneath the mill site and provides drinking water to the area."

"The most pressing water issues in Utah are contamination related to mining and fossil fuel extraction and refining," added Adam Davis, Green Party candidate for U.S. Congress from District 1 in Utah. "The Trump administration has reduced the size of the Bears Ears and Grand Staircase-Escalante national monuments, opening them up to possible coal, uranium, oil and gas extraction and creating even more danger to our water supply."

US Oil Sands, a Canadian-owned company and the owner of the first tar sands mine in the U.S., has reorganized after a bankruptcy and plans to continue mining and processing on the Tavaputs Plateau in the Uintah Basin in northeastern Utah. Extracting oil from tar sands requires strip mining and a complex water-intensive process to separate out the bitumen that is used to create the crude oil. The mine has damaged the wildlife habitat and endangered the watershed.

In an ironic twist, one of the threats described in the Department of Energy memo are severe weather events.

"Continuing use of fossil fuels contributes to global warming, thereby exacerbating the danger this administration claims to be protecting us from," said Audrey Clement, Eco-Action Committee Co-Chair and Green Party candidate for the Arlington, Virginia School Board. Clement visits the Alta Ski Area in the pristine Wasatch Mountains in Utah every year. "We must move to renewable energy immediately to protect our national security," added Clement.