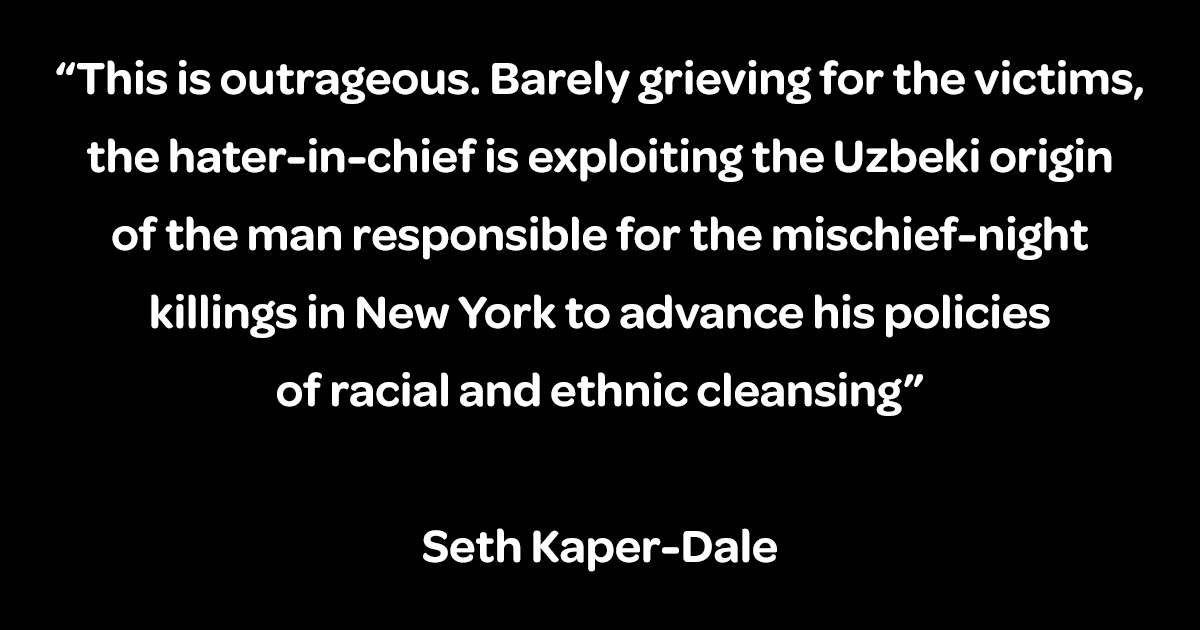 Jersey City, NJ – Pausing amidst his last days of campaigning in this racially diverse city, gubernatorial candidate Seth Kaper-Dale denounced what he qualified as the "racist politicization of terror and fear" by the Trump Administration, and claimed racism is becoming more evident in this country and his state since Trump took office.

"This is outrageous. Barely grieving for the victims, the hater-in-chief is exploiting the Uzbeki origin of the man responsible for the mischief-night killings in New York to advance his policies of racial and ethnic cleansing," Kaper-Dale said after President Trump labeled the man alleged to be responsible for the Manhattan bike path killings a terrorist who should be sent to the Guantanamo military prison while taking aim at the federal Diversity Visa program.

Kaper-Dale continued, "After the racist riot in Charlottesville did the White House condemn racism? After dozens were shot and killed methodically in Las Vegas did the president launch a campaign for gun control or call that shooter, a white man a terrorist? No. But when one deranged man who happens to be an Uzbeki recipient of a diversity visa many years ago runs people down the diversity visa program is threatened by a president working 24-7 to promote ethnic divisions and racial hatred."

"We must stop the politics of hatred in Washington D.C. and here in NJ where some local elections have begun to mirror the ethnic cleansing campaign coming out of Washington," he concluded, referring to anonymous propaganda in Edison, NJ calling for the deportation of 2 local school board candidates of Asian origin under the caption of "Make Edison Great Again."

Kaper-Dale, who is running on the Green Party ticket for governor with the controversial Lisa Durden as his running mate, is a pastor and social justice activist who was catapulted into the spotlight in 2012 when his church provided sanctuary for 9 Indonesian men slated for deportation. Last month Kaper-Dale's Reformed Church of Highland Park opened its doors as a sanctuary once again.

According to his campaign website, if elected Kaper-Dale would work to make New Jersey a sanctuary state and would provide undocumented residents with drivers' licenses, healthcare and a $15/hour minimum wage.