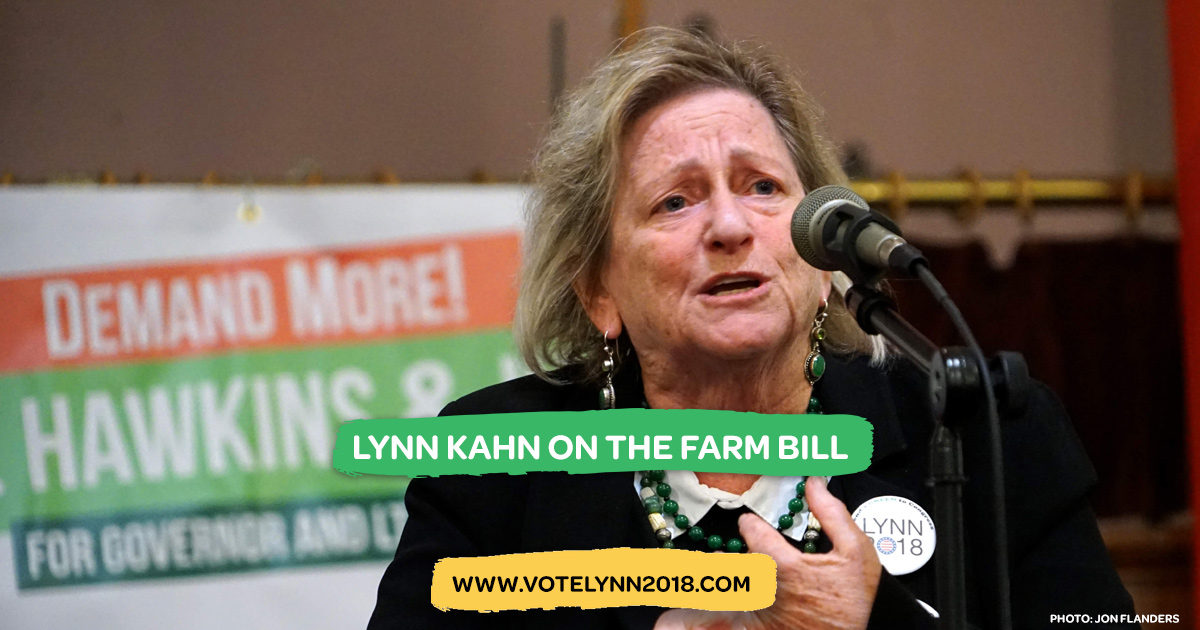 MALONE — Green Party candidate for Congress Lynn Kahn says if farmers do not get more help from the government, many will not survive. She is offering a detailed plan to improve the state of farming not only in the North Country, but across the country.

“The 2018 Farm Bill is a weapon aimed at family farming and especially dairy farms,” Kahn said during a visit to the Franklin County Fair in Malone Tuesday.

Kahn, 71, of Schroon Lake is challenging incumbent Republican Elise Stefanik, R-Willsboro, in the 21st District. Tedra Cobb of St. Lawrence County is running as the Democrat.

Aside from low prices, dairy farmers also have to deal with other factors, including competition from other products, such as almond milk that is presented as milk, Kahn said.

“Farmers are very adaptable. Rain, insects, drought, floods — they can adapt to all that stuff,” she said.

“But when consumers’ tastes are driven by what I think are unethical and inaccurate advertising and lobbying of products to replace whole, healthy, real milk with products that may be called milk, but are not, hurts.”

Kahn, 71, has a doctorate in clinical psychology. She has spent more than 30 years as an organizational psychologist and strategic planning consultant in various federal agencies, including more than six years working on the White House Partnership to Reinvent Government.

Nicknamed the “Government Mechanic,” she actually ran for president in 2016 as an independent candidate.

The Farm Bill sits in conference between the House and the Senate, as Congress is on summer recess.

On Tuesday, Kahn, the author of two books on how to reform government, offered a five-pronged approach to improve the bill that she described as “two different versions of awful.”

“I have a lot of concerns that we will lose local control of our food supply,” Khan said.

“It’s big agri-businesses with all their money that are coming in and buying out all our farms, and they don’t have the same relationship with the land, and the soil, and the weather, and the climate, and their animals, and their crops that farmers who have been farming here for a long time have.”

Kahn said Stefanik has not done enough to help dairy farmers, which are prevalent in the district.

“I don’t think Elise Stefanik has done enough on anything,” the Green Party candidate said.

“She got into politics doing staff work, and she still sees her role as doing staff work. She might help a few veterans or a few farmers find their way through the bureaucracy, but she is not asking the big enough questions, like why are we doing this? Why are we driving family farms out of business?”

Stefanik’s camp said no one has fought harder or has a stronger record than she has for helping North Country farmers.

“Unlike big-government Democrat Tedra Cobb, who knows nothing about the Farm Bill, Dr. Kahn joins Elise Stefanik in recognizing that agriculture is the backbone of the North Country,” Stefanik spokesman Leonard Alcivar said.

“We are grateful to Dr. Kahn for her service as a candidate in the 21st District.

“While we may occasionally disagree on specifics, we want the same thing for the North Country: a vibrant market in which our farmers can prosper, and a stronger environment for future generations to come.”

Kahn said Cobb probably would not be any different than Stefanik when it comes to helping farmers.

“I don’t think that Democrats or Republicans can solve our national issues, our state issues and our issues in the 21st District. They just hate each other,” she said.

“All they care about is defeating the other party. There is nothing that drives them to solve problems, and that’s my pitch to people: Make history. Demonstrate that we need another way of doing politics and running government.”

Cobb did not address Kahn’s Farm Bill ideas, but said Stefanik is no champion of the farming community.

“Stefanik has delivered nothing, literally, to the working families of Northern New York, especially our farming communities,” Cobb said.

“She chose instead to vote for the profits of the chemical and pharmaceutical interests by taking power away from local regulators of pesticides and by voting to repeal the ACA (Affordable Healthcare Act), which would have killed thousands of jobs and closed our rural hospitals.”