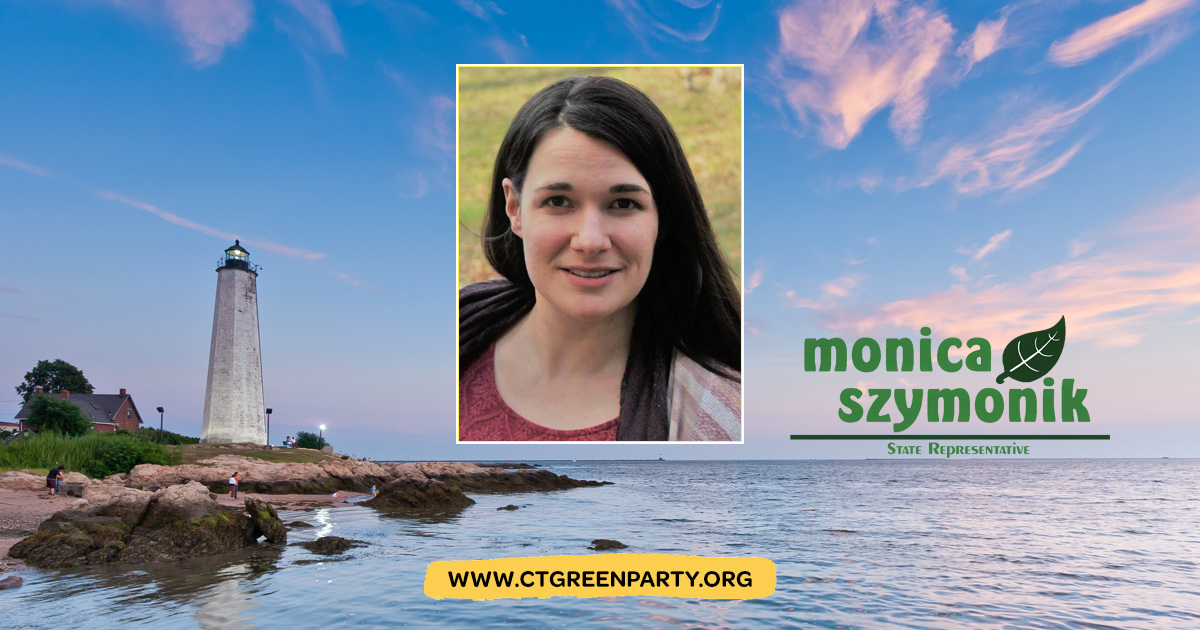 Glastonbury, CT – May 8, 2018 – Green Party of Connecticut member and Glastonbury resident Monica Szymonik will be collecting signatures in her district to attain ballot access for this year’s November 6 election in her run for Connecticut State Representative, District 31.

Mother, wife, author, dedicated family court reformer and health freedom activist, Monica has united with parents to isolate and remedy the systemic problems plaguing the justice system’s dysfunctional approach to the custody of children in divorce cases and the resultant socio/psychological fallout they can face as they grow--as a nutritionist/health coach and proponent of the afflicted’s right to pursue alternative remedies that work for them over the insurance-sponsored pharmaceutical model, this is an issue of which she is acutely aware.

Her interest in the justice system was first piqued in 2013 when a Southbury-based nonprofit connected her with the Coalition for Connecticut Family Court Reform, where, in assisting in the passage of Public Act 14-3 (“An Act Concerning Guardians Ad Litem And Attorneys For Minor Children In Family Relations Matters”) the following year, she recognized that, contrary to the popular assertion that reforming Family Court practices would mean a loss in revenues, “when kids suffer, everyone pays. Do we need a suffering generation of children who are likely to become addicted to drugs, or drop out of school? Is it worth the few million the state receives in bonuses for cutting a loving parent away from the child?”

Monica’s “Moms Unshackled”, a web-based legal abuse recovery program for parents and families caught up in the machinations of Family Court and the divorce industry, grew out of personal experience, where, for over eight years of self-taught legal education, Monica carried herself through the Family and Appellate courts as a self-represented litigant.

Her cumulative appreciation for the politics and the law fuel her drive for reversing Connecticut’s cruelly inconsistent application of the legal system to strip away parent-child rights: “We have laws on the books that force fit parents to litigate for equal rights, when those exact same… rights are naturally present when the parents are married (and do not have to be litigated for, or ‘granted’ by the state, as it is in divorce.”

The outcome of these experiences inspired the 2016 book Broken System, Broken Heart: The Soup to Nuts Guide to Protecting Your Health in the Aftermath of a Custody Battle. A blogger on “Fix Family Courts”, Monica has also appeared on RFIN. Visit her candidate Facebook page for her latest text and video commentary.

About the Green Party of Connecticut
A unity of local Green Party chapters, the GPCT  is committed to grassroots democracy, social justice, non-violence and ecological wisdom. These are the Four Pillars of all Green parties worldwide and are the first four principles of the Ten Key Values of the Green Party (including decentralization, community-based economics, feminism and gender equity, respect for diversity, personal and global responsibility, future focus and sustainability). We do not accept contributions from corporate PACs.

If you have any questions, or would like to interview her please feel free to contact Ms. Szymonik directly at (860) 705-8789.