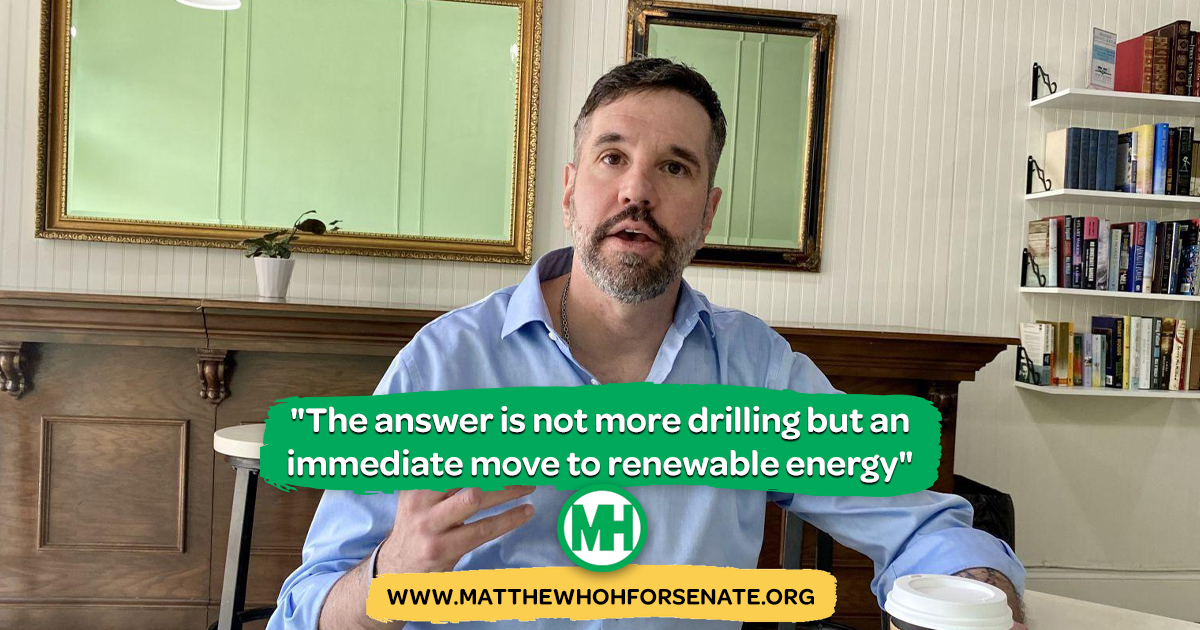 Matt Hoh, who hopes to get on the November ballot as the North Carolina Green Party’s candidate for U.S. Senate, canvased Elizabeth City on Saturday for signatures from registered voters. Hoh needs 14,000 signatures by May 17 to get on the ballot. Robert Kelly-Goss photo

A former U.S. Marine and State Department diplomat who served in the Iraq and Afghanistan wars is hoping to get on the November ballot in North Carolina as a Green Party candidate for U.S. Senate.

To make the ballot, however, Matt Hoh first needs to get the signatures of 14,000 registered state voters.

“We have 4,000 so far and we’re two weeks into it,” Hoh said of his petition drive during a visit to Elizabeth City on Saturday.

Hoh has until May 17 to meet the signature requirement and become the Green Party’s nominee for U.S. Senate. If he makes the ballot, he’ll run against Cheri Beasley, the overwhelming favorite for the Democratic Party’s nomination for Senate, and whomever wins the Republican Party primary on May 17. The Senate seat is being vacated by outgoing U.S. Sen. Richard Burr, R-N.C.

So, how does Hoh see his chances of appearing on the ballot?

“Pretty good,” he said, adding that the statewide Green Party organization is working hard to see it happen.

“There’s a lot of overlap between the two candidates,” Hoh said of Beasley and whomever the Republicans end up nominating. He says his candidacy offers an alternative to the current ballot choices and he hopes it will contribute to the future of third-party relevance in coming elections.

As a member of the Green Party, Hoh’s policy positions might align with some Democrat Party positions, but they go further and do not, he says, include big money, which he describes as a corrupting force in politics today.

“My belief is we’re not going to change the Democrat Party from within,” said Hoh.

Hoh is also a peace advocate whose experience in war both as a soldier and a diplomat have shown him, he says, that there must be another way to solve international conflict.

Hoh says Russia’s current war in Ukraine needs to be de-escalated and peace talks need to be a priority. He does not support President Joe Biden’s plan to spend $800 million to support the Ukraine’s defense efforts because he believes not enough has been done to attempt to settle the war peacefully.

In the wake of Russia’s invasion of Ukraine, oil prices have soared and the price of gas at the pump has broken $4 a gallon nationwide. Many argue that allowing more drilling on federal lands would push the U.S. toward energy independence and lower gas prices. But Hoh says that is a “false narrative.”

Hoh says the answer is not more drilling but rather an immediate move to renewable energy. As part of his campaign platform, Hoh supports the idea of moving to 100 percent renewable energy by 2030.

Hoh acknowledges that an immediate shift to 100 percent renewable energy likely would disrupt an economy already in the grip of record inflation, forcing people to spend more on day-to-day necessities. However, he believes the switch would be less painful for most people if the U.S. ended corporate welfare policies favoring large businesses and instead awarding massive tax subsidies to workers.

“Financial institutions benefit from (current) policy at the expense of workers,” said Hoh. “They have no interest in supporting the workforce.”

Hoh has spent time as both a diplomat and as a member of Washington D.C. think tanks such as the Center for International Policy, where he serves as a senior fellow. He says that experience has helped him become more aware of how the current two-party system gives its allegiance to the wealthy, banks, and corporations. He has witnessed “decision-making that doesn’t make sense” and that is clearly aligned with the interests of the powerful and wealthy, he said.

That system can be broken up, but only if third-party candidacies like his have the opportunity to thrive, Hoh said. That’s why he spent Saturday in Elizabeth City going door-to-door, introducing himself to voters in hopes that by May 17 he will have enough signatures to give voters a third choice on the November ballot.

“We have to get away from an identity system of blue versus red,” said Hoh. “The system we have needs to be more inclusive.”