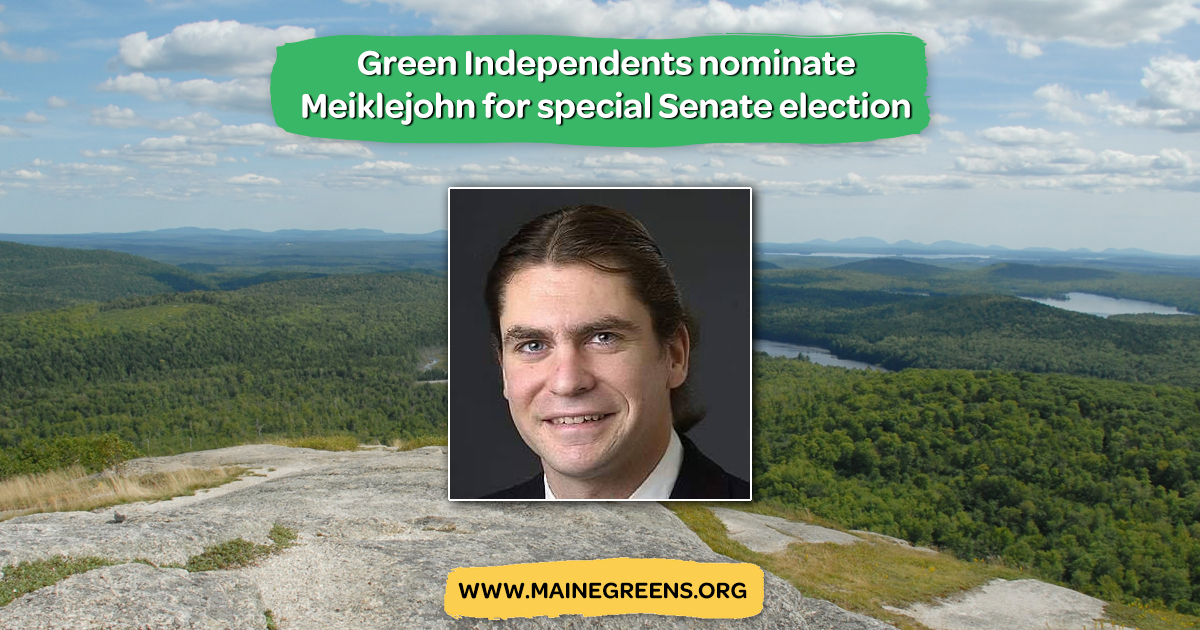 ELLSWORTH, ME – Benjamin Meiklejohn was nominated as the Green Independent candidate for Senate District 7 in the upcoming special election being held on June 14. The Hancock County Green Independent Committee met on Feb. 13 and voted unanimously to nominate Meiklejohn.

Meiklejohn, 50, of Mount Desert, will provide voters a rare opportunity to support a Green Independent in a large jurisdiction.

In State Senate elections, candidates must usually collect 100 signatures from enrolled party members in order to get on the ballot. The Green Independent Party's lower enrollment numbers typically prohibit it from gaining access to the ballot in larger districts. However, because the special election is being held to fill a vacancy that resulted from Former Senator Louis Luchini's resignation, parties are allowed to nominate candidates at the county committee level without needing to collect 100 signatures.

"The State of Maine's laws are designed to make it as difficult as possible for any political parties that aren't Democratic or Republican, to access the ballot, or gain any momentum" said Meiklejohn. "They really don't want there to be any choices except for them. We are seizing this opportunity to give voters a Green Independent option."

Meiklejohn, who previously served on the Portland School Committee for six years, also ran for state representative in 2020, seeking to represent Bar Harbor, Lamoine and Mount Desert. In that election, Meiklejohn received nearly 15% of the vote, despite having lived in the district for less than a year at that time.

In 2018, Meiklejohn served as a legislative aide in the Maine Legislature, under the direction of House Green Independent minority leader, Rep. Ralph Chapman. "We fought against corporate welfare for Bath Iron Works, and against loosening environmental protections for mining," Meiklejohn said, "but the Democrats pushed them both through."

Unlike the other nominees for state senate, Meiklejohn said he does not plan on running in the November election.

"This is a rare opportunity to give our constituents a moment to breathe, to get a reprieve from the tense and antagonistic behaviors of the two major party institutions," said Meiklejohn.

Because of the timing of when a replacement senator will be inaugurated, Meiklejohn said there is one single reason that he would be the most effective person to serve as a transitional senator--and it has nothing to do with issues.

Meiklejohn said a Democratic or Republican senator would not be able to wield the same influence to secure funds for Hancock County as a person who could outright block a special budget session from happening would be able to.

"It's time to mix things up," said Meiklejohn. "Voters are feeling a lot of fatigue as the major parties solidify increasingly cultish qualities."

Meiklejohn said he hopes to reach the "disenfranchised and alienated" voters, to "give them a voice."

"The oppositional dichotomy of two major parties constantly battling each other in the quest for power does not have to be the status quo," he said.

Meiklejohn said the winner will be inaugurated in June, after nearly all legislation has already been voted on.

"We candidates can give flowery speeches about the issues all we want," he said, "but the reality is, this short term of only a few months left, is going to be all about constituent service, platitudes aside."

Meiklejohn said when he was on the Portland School Committee, constituents, both conservatives and liberals alike, recognized his ability to hear all viewpoints and be fair. "I'm the best person for this position," he said, "because I'm not beholden to a left or right ideology and I know how to listen."

"Democrats and Republicans spend too much time alienating and shunning each other. It's not healthy, it's toxic."

Meiklejohn said if he were to win, his brief term as a transitional senator for several months will give the district a chance to reset the political outlook.

"People deserve a break from the Democrats and Republicans," he said, "even if only for a few short months."