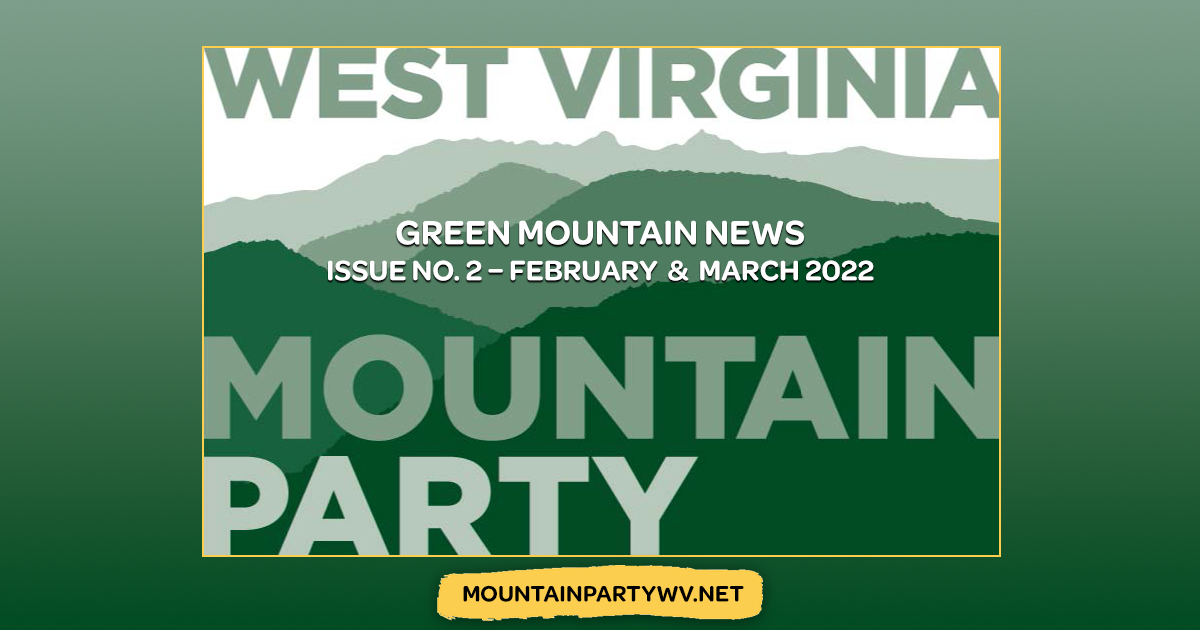 Biennial Convention Announced For May

The Mountain Party’s biennial convention for 2022 will be held on May 14th in Morgantown at the hotel Marriott at Waterfront Place. The public and the press are invited to participate in our planned convention program, which will soon be announced. Details will be provided on the convention’s Facebook event page, where people can RSVP to the event.

(WASHINGTON, D.C. — February 25, 2022) The Green Party condemns Russia's military incursion, which is in violation of international law, regardless of real or perceived provocations. We also recognize the US government and Western powers are responsible for 30 years of provocations by failing to respect the promise to not expand NATO after the fall of the Berlin Wall in 1989. This reckless antagonism between world powers has led to war with the potential for massive destruction, environmental damage and loss of life.

"The threat of all-out nuclear war is hanging over everyone. The US and other countries should be working together to combat climate change instead of fighting over resources that gain profits for the multinational corporations," said Rita Jacobs, member of the Green Party's Peace Action Committee (GPAX).

We call on the parties involved to pursue a diplomatic solution through the United Nations, in accordance with international law. A serious solution that prioritizes the lives of Ukrainian civilians will require an immediate ceasefire, withdrawal of Russian troops, a promise of no US troops or arms in Ukraine, and a commitment to diplomacy."

"We reject the insipid demands of US and European politicians and media to pick one side or another," said Matthew Hoh, Green Party candidate for US Senate in North Carolina. "Rather we choose another side—the people—and condemn the decades-long policies of US, NATO, Russian, and Ukrainian leaders that have led to this point."

(WASHINGTON, DC — March 4, 2022) The Green Party rebuttal to the State of the Union, given by North Carolina U.S. Senate candidate Matthew Hoh, is available for viewing on the Matthew Hoh for Senate website. The full rebuttal is just under 30 minutes. Excerpts are posted below.

Hoh, a U.S. Marine veteran turned antiwar organizer, said, "We just witnessed during the State of the Union the two parties of war and Wall Street cheer for profits and stock prices over human life and our planet."

"Obscenely, perhaps the loudest cheers tonight were for the killing that is occurring in Ukraine. The catastrophe in Ukraine has very nearly everything to do with liquid natural gas markets and other commercial concerns and the megalomania of those in D.C., Moscow, London and Kiev. Those, as well, are the reasons that have driven the U.S. wars, invasion, aggression and occupation throughout the Muslim world. Wars that are now mostly secret and extend from the West Coast of Africa all the way to Pakistan. Wars that may be unseen to us, but are brutal, calamitous and criminal to those living through them. Perhaps nowhere is this better displayed than in Afghanistan, of which the president made no mention tonight. [Twenty]-plus years of U.S. war in that country has led the population to be governed by the Taliban again. The people of Afghanistan are starving and freezing through the winter, and the United States has just stolen their money. This is why we say we see no difference in these wars."

Hoh also discussed the failures of both parties to address the pandemic and climate change and provided Green Party solutions.

"We look at the climate crisis and the pandemic and we see the same reasons – decades of disuse, disinterest and disregard for human life and dignity at the expense of profit."

"The first thing we need is an economic bill of rights that will sustain working families and will prepare us for the future that climate change will bring. This is what separates us from the two parties of war and Wall Street – our belief in human dignity and rights. We believe that healthcare, housing, education, and jobs are a human right. And we believe that our government has a duty to meet those rights."

"We have a choice, just as decades of Republican and Democratic greed have brought us to this point. We can now choose to take back control, make things right, and ensure our future. Together, we can not only move forward, but we can rebuild, heal and prosper. Think of why you tuned in tonight to watch a Green give this rebuttal to the President. Remember who you are doing this for. And remember who is against us. We must stop this profit-taking by the parties of war and Wall Street. We must do it for ourselves, our loved ones, our neighbors and our planet."

The Mountain Party is recruiting qualified candidates to run for elected office across West Virginia. Many seats are up for election in 2022. 35% of the Senate Districts and over 25% of House Districts are projected to go uncontested for the General Election.

Despite the major parties' candidate slates being set, the Mountain Party still has time to recruit candidates in time for our May Convention. Additionally, many local races at the county level are similarly uncontested.

We are seeking candidates with the desire to run a successful campaign and engage voters. Experience in public speaking, administration and planning, along with a comprehensive understanding of financial reports and budgets, is very highly recommended. Potential candidates must share the values outlined in the Mountain Party platform of Democracy, Social Justice, Environmental Justice, and Economic Justice.

We are especially interested in candidates who are members of under-represented groups, as there is strength in diversity. It takes everyone of us to advocate for better public policy and a brighter future.

Across the state, candidates will challenge establishment incumbents and corporate opposition. The Mountain Party candidates we seek will stand with the people in opposition to the expansion of corporate power and control. They will reach out to voters of different backgrounds and forge together coalitions aiming to improve the quality of life for everyone in their community.

Mountain Party officeholders are actively working to protect our environment, in opposition to toxic fracking and pipelines.

The Mountain Party has a powerful vision for a better West Virginia, but we cannot realize that vision without you. We urge you to join us in this important effort and become a Mountain Party candidate for office today. We need your skills, energy and passion for making the world a cleaner, kinder and more sustainable place for all of us to work, live and thrive.

A majority within each of the Democrat and Republican caucuses in the State House and Senate passed SB 4, a bill to repeal the ban on the construction of nuclear power plants. In truth, the existing law is not an explicit ban on nuclear power, but rather requires common sense conditions such as the safe storage of radioactive waste. Already, West Virginia is dealing with another radioactive waste problem from oil and gas drilling.

The major parties' quick removal of these safeguards, that would otherwise prevent the reckless and risky operation of a rudimentary nuclear power plant, is an act of bad faith. The Republican led legislature is not concerned about harnessing nuclear fission technology to reduce greenhouse gas emissions, but rather to facilitate power generation by all means necessary, regardless of the consequences.

The Mountain Party supports the immediate and rapid implementation of clean renewable energy using current available technology, especially geothermal energy in West Virginia. Only recently has the legislature begun to take geothermal seriously, with the House passing HB 4098, aiming to explore its development in the state. The timeline of such development can realistically be obtained in the very near future, unlike the unfortunate reality of clean nuclear fusion which is far from being developed for any practical use- too late to prevent the damage of climate change.

On this International Women's Day (March 8, 2022), the Mountain Party celebrates the great achievements of women across the globe. International Women's Day has its roots in the socialist movement, having first been celebrated by the Socialist Party of America in 1909 and adopted globally by the socialist movement following the revolution in Russia, which gave women the right to vote.

It is just as important now as it has ever been to fight for the rights of women. As the Supreme Court is weighing a case which could drastically limit abortion rights, West Virginia Democratic Party leader Senator Joe Manchin joined with Republicans to block a bill codifying the right to an abortion. WV Democratic Minority Leader Stephen Baldwin in January introduced an anti-abortion resolution in the State Senate; later, the State Senate voted to rescind West Virginia's ratification of the Equal Rights Amendment. Across the country, state legislatures are passing bills to restrict or ban transgender women and girls from competing in sports. Powerful men accused of sexual assault and misconduct continue to hold power and influence in our society, including President Joe Biden and former President Donald Trump.

Not all is hopeless, however. Across the globe, women are winning their fights for reproductive justice. This past January, dozens of activists from multiple organizations gathered at the state Capitol to celebrate the 49th anniversary of Roe v. Wade and to protest bills in the state legislature which aimed to severely restrict reproductive rights. The Mountain Party, as the progressive voice in West Virginia for two decades now, is continuing the fight for women's liberation which it has supported from its inception. The Mountain Party advocates for a universal healthcare system in which reproductive care, including abortion, is guaranteed and free at the point of service with no questions asked. We call for the expansion and protection of each woman's right to fully participate in society, free from sexual harassment, job discrimination, and wage discrimination. Much more must be done to ensure equality in wages and employment, to end the feminization of poverty, and to redress the reality that much of the work that society assigns primarily to women is presently unpaid.

The fight for women's rights is far from over, but on this International Women's Day we celebrate the working class women who have fought and continue to fight for an equal and just society.

"I am convinced Socialism is the only answer and I urge all comrades to take this struggle to a victorious conclusion. Only this will free us from the chains of bigotry and exploitation." - Malala Yousafzai

"Those who do not move, do not notice their chains." - Rosa Luxemburg

February 17, 1942
"We have two evils to fight, capitalism and racism. We must destroy both racism and capitalism."

Feb. 23, 1868
"Capitalism cannot reform itself; it is doomed to self-destruction."

c. March 1822
"I had crossed the line. I was free; but there was no one to welcome me to the land of freedom. I was a stranger in a strange land."

March 24, 1912
"Greatness is not measured by what a … woman accomplishes, but by the opposition … she has overcome to reach [her] goals."

Visit our website at www.mountainpartywv.net and go to "Email Sign Up" which is listed in the top navigation menu, where you will be redirected to https://mailchi.mp/8870cb0a9702/mountain.

Any questions or request for assistance may be sent via email to [email protected].

Why The Mountain Party?

Read: The Case For An Independent Left Party In West Virginia.
(Op-Ed originally published by The West Virginia Holler)