A green movement for proportional representation in 2023 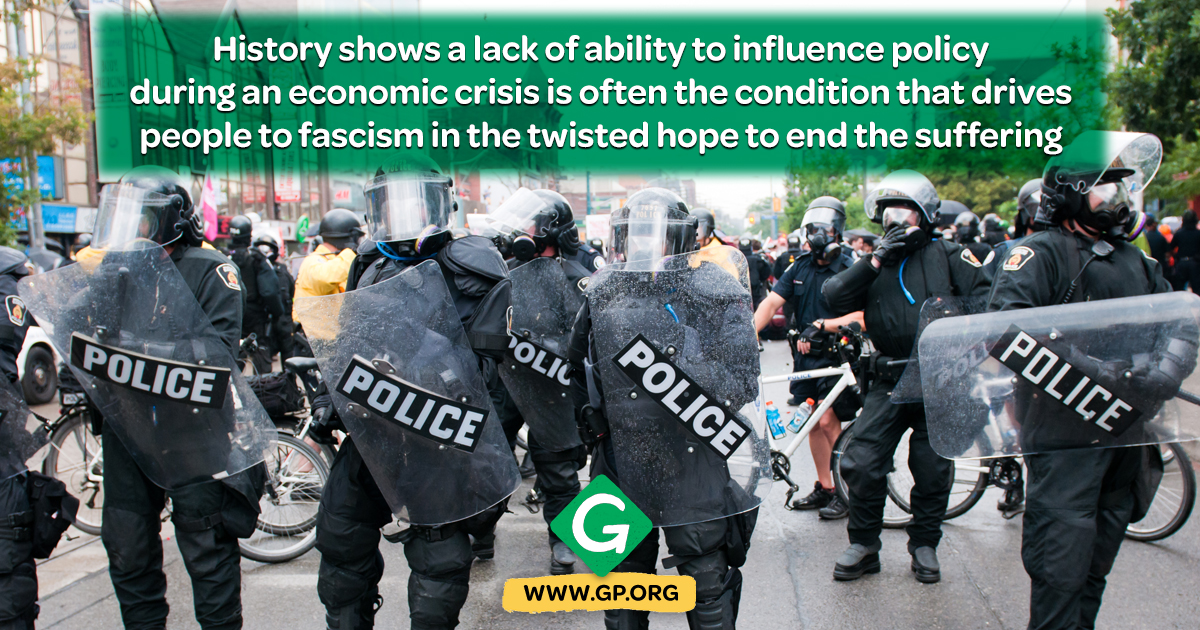 2022 appears to be yet another year in which the “lesser evil” narrative has driven much public debate. While the anger with Democrats for not making meaningful action toward fulfilling their campaign promises is palpable, it is overshadowed by fear of what a Republican majority in Congress and state houses might bring regarding civil rights including abortion rights and other important issues.

Instead of making progress, society is instead sliding backward, with two choices – fast or slow backslides. Instead of voting “for” a vision of the future, many voters are driven only to vote “against” dire situations getting worse. This situation is untenable. History shows lack of ability to influence policy during an economic crisis is often the condition that drives people to fascism in the twisted hope to end the suffering.

The rise in populist authoritarianism and fascism is complex, but one factor is an increasing lack of faith and trust in the existing system and representative democracy. This isn’t surprising given the lack of choice on the ballot in most elections, due to gerrymandering, corporate money, and even the way that we vote itself.

Plurality voting is how we currently vote in the United States. Under plurality rules, every voter gets one vote, and the candidate receiving the most votes wins. While it seems simple, straightforward, and fair on the surface, the results of plurality elections often do not match what voters actually want or intended. When there are more than two options, specifically, funny things can happen such as a candidate winning despite having a majority of voters hate them. For example, one candidate with 35% of the vote can win the plurality in a three-way race even though the other 65% of voters did not want them to win, just because those other voters split between two other candidates that each received only 32.5% of the vote each. Plurality voting often follows Duverger’s “Law”, an observation from social science, that plurality voting tends to lead to a two-party system, with all other options shut out, because of fears of splitting or “spoiling” votes like our example above.

Plurality doesn’t guarantee a two-party system though; we see more than two parties winning national elections in some countries like Canada and the UK. However, even in these cases, the system does tend to bias toward one or two “major” parties. Throw in gerrymandering and corporate funding of elections, plus extremely difficult laws for candidates to get on the ballot in the first place, and we have a very unique formula in the United States for a two-party “duopoly” where elections increasingly do not represent the voters’ wishes and instead preserve the power of incumbents and party leaders.

To create a real multi-party system, restore trust and faith in the democratic process, and push back the rise of fascism, we need to reform our election systems. Ideally, any reform should address all of the issues raised: how we vote, how votes are counted, how it is funded, how candidates get on the ballot, and more.

Thankfully, there is a reform that unites most of these issues – proportional representation. Proportional representation is the idea that any voting system should ensure that a legislative body – any group of representatives that makes laws, such as Congress – should be elected in a way proportional to the votes from the people. This ensures as many communities as possible have some level of representation in the legislative process. This is drastically different from plurality voting, in which only one winner is selected, and so any other viewpoints or communities are completely left without representation. In essence, anyone not voting for the winner has a “wasted” vote because it did not elect anyone that would represent their interests.

A common form of proportional representation uses ranked-choice methods, in which voters rank the candidates from favorite to least favorite, along with multi-winner districts instead of the one-winner districts we see under plurality voting. The combination of ranked-choice with multi-winner districts can ensure that most if not all communities are fairly and proportionally represented. We can elect more than one person at one time to ensure all the votes are counted toward some candidate, even if it wasn’t your top pick. There are a few methods to count the ranked-choice votes to ensure this proportioning is correct, but a common one is a single transferable vote, also known as STV.

STV is not a new concept. Not only is it used today in many countries around the world, but even many cities and counties in the United States used STV or similar methods in the early 1900s. Community movements for STV grew as opposition to the “party boss” system in which “bosses” controlled who would get the Democratic or Republican Party nomination, and so effectively served as gatekeepers to who could run for office. Community movements used ballot initiatives and referendums in many cases to require cities and counties to use STV methods for electing city councils and more, and that resulted in community representation in many cities. Women and Black and Brown communities that didn’t even have voting rights at the time were elected to city offices due to STV allowing communities choice and fair representation.

Unfortunately, ranked choice and STV method disappeared from most cities by the 1950s. It is important to recognize that STV did not disappear because of voter dissatisfaction – polls at the time showed most voters found the voting method to be easy and the results good reflections of communities – but because of the white supremacist power structure being threatened by increasing numbers of leftists, especially people of color, getting elected to office under STV systems. Democratic and Republican Party bosses joined together to use racism and the “Red Scare” fear of “communists” to justify the end of STV and proportional representation methods.

We should therefore use history as our guide for community movements today that face many of the same electoral gatekeeping problems as then. The Green Party should help lead community efforts for the following:

Proportional representation and ranked choice voting are important topics that we can use for public education and outreach, for recruiting and growing the Green movement and ultimately organizing to effect change. Greens should consider how they can support this effort in 2023 and beyond, and connect with their local, state, and national Green Party to cooperate and organize.

This was originally published in Green Pages.