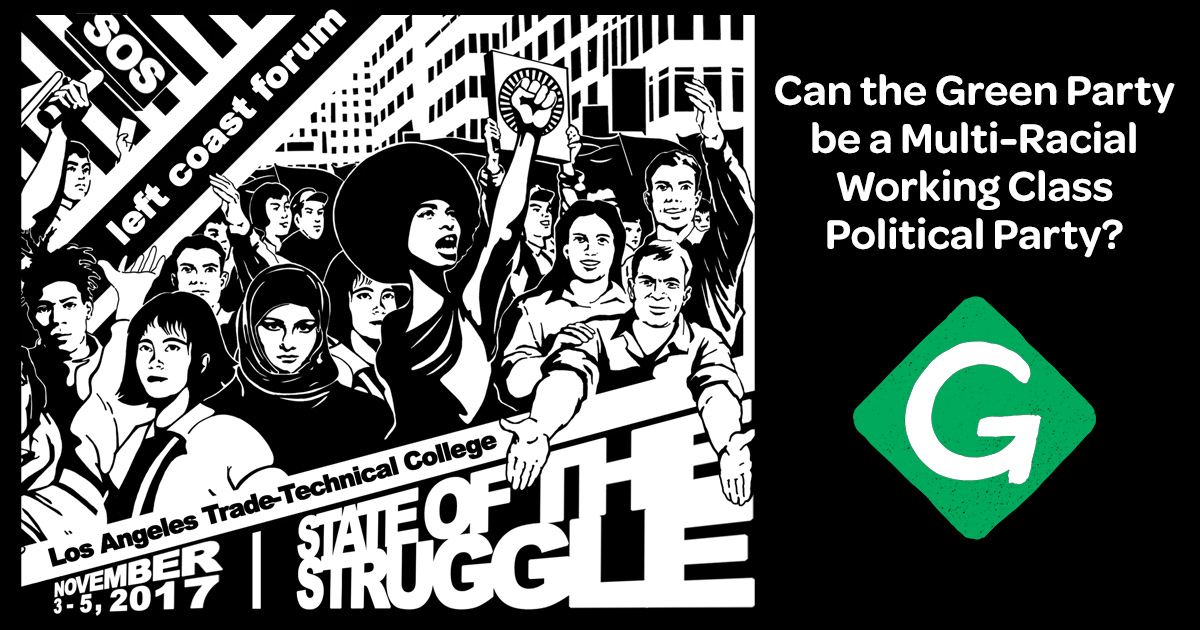 Members of the Green Party of the United States will participate in two workshops at this weekend's Left Forum in Los Angeles.

Can the Green Party be a Multi-Racial Working Class Political Party?

The converging ecological, political and economic crises are creating material conditions ripe for revolutionary change -- in the streets and at the ballot box. Can the Green Party serve as the electoral arm of the growing resistance?

This session will be live streamed at https://www.facebook.com/GreenPartyUS. Livestream broadcast at begins 12 noon ET, 9 a.m. PT.

David Cobb was the Green Party nominee for President in 2004, managed the Stein/Baraka 2016 campaign, and serves as the Coordinator of the GPCA Candidates & Campaigns Working Group. He is a co-Founder of Move To Amend and and Fellow with Liberty Tree: The Foundation for the Democratic Revolution.

Angelica Duenas is the daughter of Mexican immigrant parents who served as a delegate for U.S. Senator Bernie Sanders at the Democratic National Convention during his legendary 2016 Presidential run. It was during this experience that Duenas became painfully aware of the limitations of the two-party political system in American politics,. This compelled her to officially join the Green Party, and she served as Southern California Campaign Coordinator for the Jill Stein 2016 Presidential Campaign. She is an active Council Member at the Green Party of Los Angeles County and is currently running for Congress in California District 29 (north central San Fernando Valley).

Timeka Drew is National Director of the Liberty Tree Foundation, a position she has served in since February of 2016. Previously she served as lead organizer of the Global Climate Convergence. Timeka came to the Liberty Tree community via her work with the Poor People's Economic Human Rights Campaign (PPEHRC) and local democracy, food sovereignty, and antiracist organizing in Los Angeles and her hometown of Fort Wayne, Indiana.

Melezia (Mel) Figueroa is a Sociologist, Geographer and Researcher currently completing her PhD at UC-Berkeley. She serves on the Steering Committee of the Campus Anti-Fascist Network, and has been on the front lines organizing resistance to fascism during the "Battle of Berkeley." She served as the Press Director for the Stein/Baraka 2016 Presidential Campaign, and is currently facilitating "Movement School for Revolutionaries" with David Cobb across the country.

From Resistance To Running For Office: How Progressives Can Build Progressive Alliances to Win

Thousands of progressive activists are running for state and local office, inspired by the Bernie Sanders or Jill Stein presidential campaigns and the examples of Richmond, CA Mayor Gayle McLaughlin and Seattle City Councilor Kshama Sawant. The Richmond Progressive Alliance (RPA) is successfully putting political decision-making power in the hands of the people by electing corporate-free representatives. The RPA mobilizes people in support of progressive policies and candidates, often in alliance with other local groups and across partisan labels. Richmond Mayor Gayle McLaughlin is currently running for Lt. Governor in CA, helping to nurture additional Progressive Alliances across CA.

David Cobb was the Green Party nominee for President in 2004, managed the Stein/Baraka 2016 campaign, and serves as the Coordinator of the GPCA Candidates & Campaigns Working Group. He is a co-Founder of Move To Amend and and Fellow with Liberty Tree: The Foundation for the Democratic Revolution and is active with the North Coast Peoples Alliance.

Gayle McLaughlin was born in Chicago, Illinois into a working class union family. She is the middle child of five daughters. Her father was a carpenter and member of the Carpenter’s Union and her mother was a factory worker and housewife. As a young activist during the 1980’s, Gayle worked with the Central American solidarity movement, People United to Save Humanity (PUSH), and the Rainbow Coalition. As a two-term Mayor of Richmond CA, she led a successful grassroots movement to liberate that city from the grip of corporate giants and wealthy special interests, and returned political power to our residents and local businesses and we defeated the oil giant Chevron’s attempts to buy our democracy.

Richard Hobbs is a former labor organizer, community organizer for the Silicon Valley Toxics Coalition, elected community college trustee, moderator of Move To Amend Santa Clara County, and head of the human rights office of Santa Clara County. Currently he serves as the executive director of Human Agenda, national board member of Take Back Your Time, steering committee member of the South Bay Progressive Alliance, and immigration attorney with the legal collective CLARO.