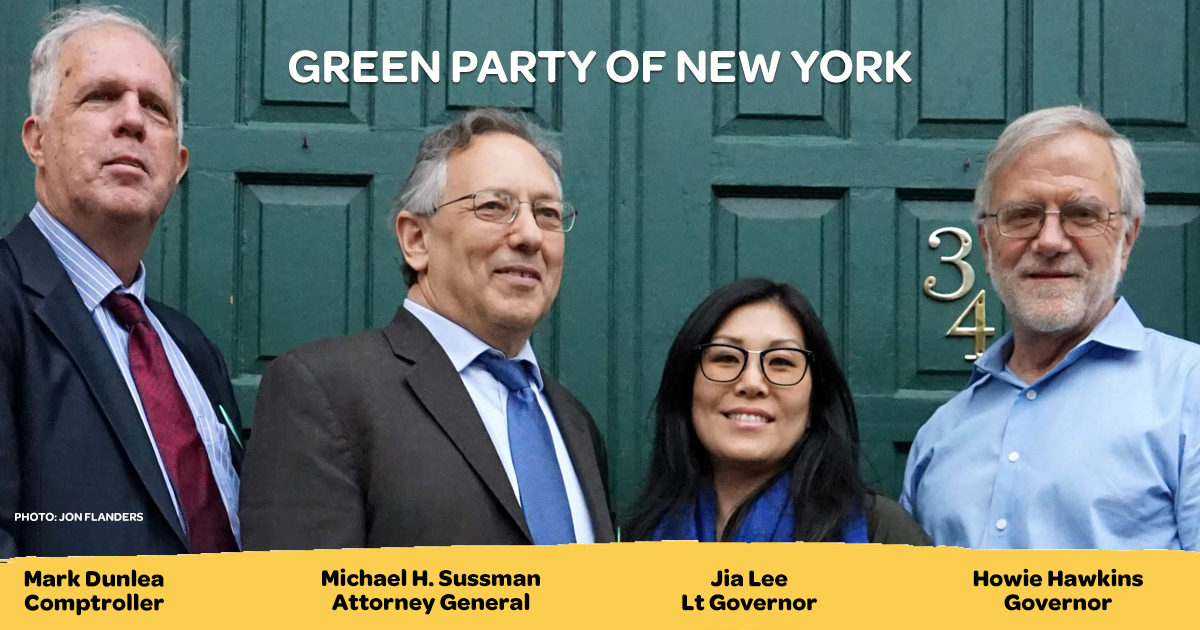 At its state convention in a Rennselaer church on Saturday, the Green Party of New York designated Howie Hawkins for Governor and Jia Lee for Lieutenant Governor.

For Hawkins, a retired Teamster from Syracuse, it will be his third consecutive run for Governor. Hawkins finished third with 5% of the vote in 2014. Hawkins has been an organizer in progressive movements since the late 1960s and was co-founder of the Green Party in the U.S.

Lee is a public school teacher and parent in New York City. She is a leader in the Opt Out movement against high-stakes testing. A UFT chapter leader, she is active in the Movement of Rank and File Educators, which ran her for UFT president in 2016 where she came in second with nearly 11,000 votes.

Progressive educational reforms will be a major focus of the campaign. Besides full funding of schools, Hawkins and Lee call for an end to high-stakes testing, a halt to the conversion of public schools into privately-managed charter schools, and desegregation of schools in New York State, which are the most segregated in the nation by race and class.

"The pending legislation to delink high-stakes tests from teacher evaluations is not enough. In fact, it only addresses the state tests, but not other standardized tests for teacher evaluations. We also need to de-link the tests to ranking schools and using those rankings to privatize low-scoring, high-poverty schools into charters. We've got to fight for justice for high-poverty schools and their students as well as teachers," Lee said.

"Integration has been by far the most effective education reform for closing achievement gaps and improving the education of children of all backgrounds. But testing and charters have become the bipartisan evasion of confronting segregation," Hawkins said.

The candidates called for school integration though controlled choice among public schools. Controlled choice replaces student assignment based solely on the attendance zones with families ranking their choices of schools from across the district. Students are then assigned to schools based on their preferences and a formula that ensures a relatively even distribution of students by socioeconomic status across all schools.

The Green ticket will again campaign for a Green New Deal as their "alternative to Cuomo's corrupt corporate welfare for wealthy campaign contributors," Hawkins said. "Tax breaks and subsidies for the rich don't trickle down to the people. By investing in public infrastructure and services – clean energy, mass transit, public housing, public broadband, public banking, environmental protection, education, health care – the Green New Deal will create jobs and revitalize the economy from the bottom up."

The Greens would pay for these public investments with a more progressive income tax, keeping instead of rebating the Stock Transfer Tax, and other progressive tax reforms. They would also restore previous levels of state revenue sharing with local governments to cover the costs of unfunded state mandates and enable local governments to cuts New York's high local property taxes.

"These public investments and tax reforms will lower the costs of living and doing business in New York," Hawkins said.

He said that single-payer health care will lower healthcare costs, renewable energy and public power will lower energy costs, public broadband will cut the cost of broadband services, public banking will lower the costs of credit, and revenue sharing will cut property taxes.

"The Green New Deal reforms will improve the business climate in New York far more than the top-end tax breaks and public austerity budgets favored by business and banking elites. These reforms will increase effective demand by increasing consumers' disposable income. They will cut the top cost drivers deterring businesses in New York. The Green New Deal will open up vast new opportunities for small businesses in building this infrastructure and providing these services," Hawkins said.

"We want to encourage worker cooperatives to take advantage of these opportunities by providing technical assistance and credit through state and local public banks. We want working people to be able to go into business for themselves and receive the full fruits of their labor though cooperatives," Hawkins added.

The Green convention also nominated the prominent civil rights and environmental lawyer Michael H. Sussman of Goshen for Attorney General and the noted environmentalist and anti-poverty activist Mark Dunlea of Poestenkill for Comptroller.