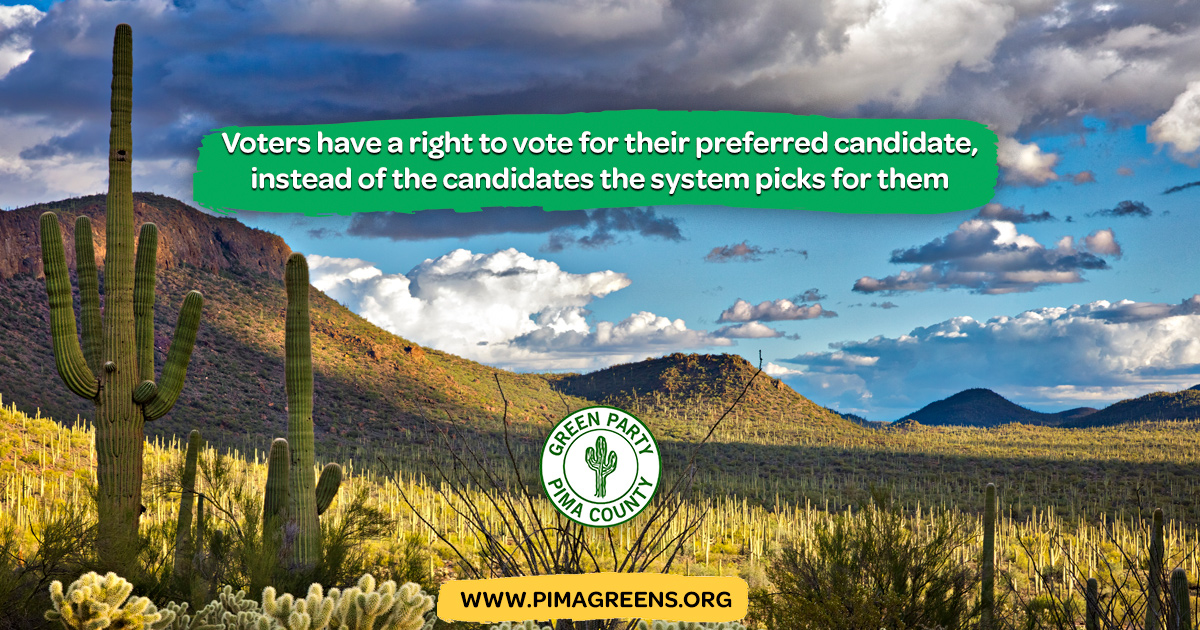 TUCSON, Az., June 14, 2019 — On Wednesday the Green Party of Pima County (GPPC) filed a lawsuit against the City of Tucson for depriving the party of ballot status in the upcoming elections on November 5, 2019. The Green Party is legally entitled to representation in the 2019 election but has been left off the roles and will not be on the ballot if the City has its way.

The City of Tucson has attempted to unlawfully suppress the voice of the Green Party of Pima County and deprive 262,000 registered voters in Tucson from hearing and voting for Green Party solutions to the political and economic challenges facing our community.

This decision by Roger Randolph for the City Clerk’s office is not only undemocratic voter suppression but patently illegal. It is shameful that at a time when citizens’ democratic rights are under attack by the Trump administration, Tucson would willfully join the attack and violate the law to remove a legitimate third party from the ballot. This action deprives the citizens of Tucson of a third choice on the ballot and protects business as usual with no change to the status quo.

“American’s have a right to vote for the candidate of their own choosing not only the candidates that the system picks for them,” said a GPPC spokesperson.

By removing the Green Party from the ballot, citizens will not have a chance to vote for the Tucson Green New Deal, an infrastructure project that will provide an answer to the climate crisis as well as union jobs at a living wage. Tucsonans will not get an opportunity to support a Green Party campaign to transform our economy from one that destroys our unique desert environment and pollutes our drinking water to one that addresses social, environmental as well as economic justice that protects people and the Earth.

The case will be heard by Judge D. Douglas Metcalf in Room 580 of Pima County Superior Court, 110 West Congress Street on Monday, July 1st at 11:00 AM. All citizens who want to defend our democratic rights are invited to attend.