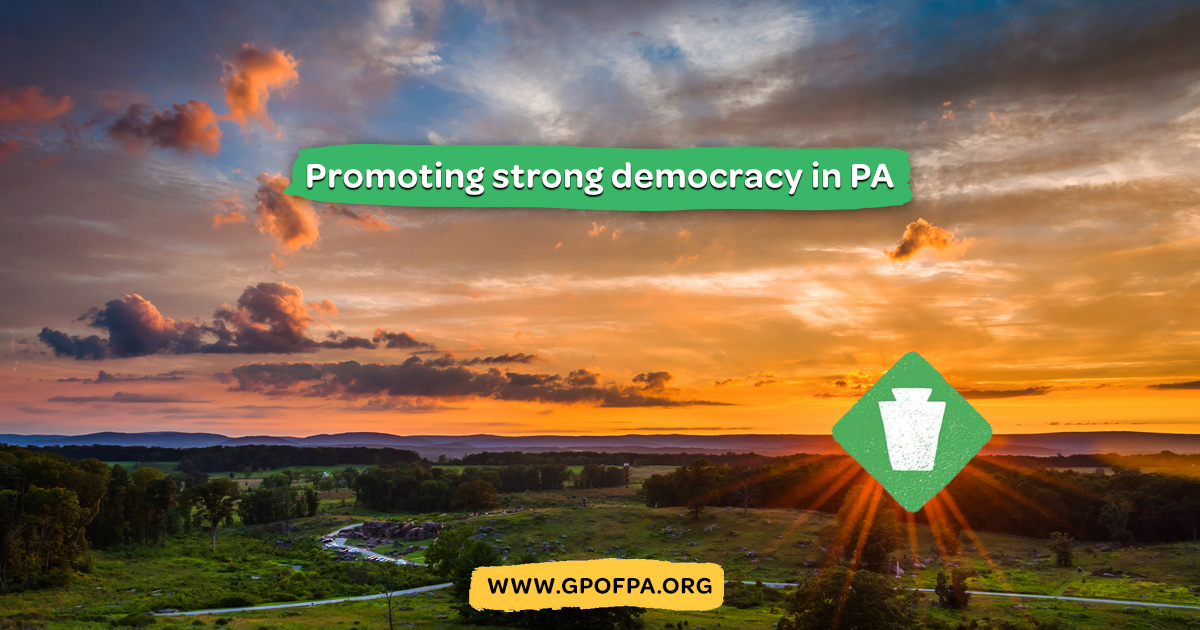 PA Governor Tom Wolf (Democrat) and PA Senator Mike Folmer (Republican) have announced proposals to reform Pennsylvania’s antiquated, expensive, and daunting election system. The Green Party of Pennsylvania (GPPA) reviewed these proposals and found that both include some excellent changes which would eliminate obstructions and make voting easier and more accessible. However, both proposals also have some concerning issues and are missing some key elements of a fair and inclusive system.

The GPPA calls for the following:

Voter's Choice Act. This would make elections fair by granting 'third party' and Independent candidates the same nomination signature requirement to gain ballot access as Democrats and Republicans. This would also make it easier for 'third parties' to be recognized by basing party status on lower registration requirements.

"They told my parents' generation, 'You can't simply waltz in here and have a say, you gotta count how many jellybeans are in this jar, first,'" recalls Co-chair Alan Smith of GPPA. "The message to me today is, 'You have to navigate a bunch of hurdles and election procedures in order to have a say.' Voting should not be stifled. The current system is institutionalized voter suppression. The act of voting should not only be as easy as possible, but also should be voter verifiable."

The GPPA Platform demands same-day voter registration, an election day holiday, and a voter-verified paper ballots for all voting machines. These changes are essential in order to increase participation and to guarantee the integrity and veracity of our elections.

Ranked-Choice Voting. Voting for candidates in order of preference assures a result that most people can support as well as eliminating the "spoiler" charge against "third parties" and Independents.

Garret Wassermann, vice-chair of the Green Party of Allegheny County, explained the proposal this way, "Voters should not feel pressured to choose a 'lesser evil.' Our antiquated electoral system should be replaced with ranked or score voting that encourages votes for consensus-building candidates and for the platform that best represents most voters, rather than pushing voices out of the debate with charges of 'crowded primaries' or 'spoiler.'"

"During my 2018 campaign for U.S. Senate," related Neal Gale, chair of Montgomery County Green Party, "I met countless voters across Pennsylvania who wanted to vote for me, based on my stand on many issues, but who told me they couldn't do so for fear the Republican candidate would win. It is time to move to an electoral selection system that allows for ranking the voters' choices for candidates. Ranked Choice Voting solves the problem of our citizens' inability to vote for who they REALLY want to vote for, without fear that their vote will be wasted or will allow an unwanted candidate to be elected. It's time!"

Public Financing of Elections. This would make elections truly a contest of ideas and eliminate negative, smear campaigns.

Emily Cook, a member of Montgomery County Green Party, said, "Small-donor matching is an innovative reform that uses public funds to amplify small private donations. PA would provide qualified candidates with $6 in public funds for every $1 raised from small donors. Other locations have used such a method of public funding of elections. It has diversified their donor pool, helped candidates of modest means run for office, and allowed elected officials to spend more time talking to their constituents instead of dialing for dollars."

"Today Independent and 'third party' voters make up 14 percent of the total," explained Shane Rielly, a member of the GPPA steering committee from Lackawanna County, "but those taxpayers are shut out of the democratic process even as their tax dollars pay for the cost of primary elections. Allowing all the voters to have a voice in the political process is the decent, American thing to do. Preventing people in your neighborhood from making decisions about their elected leadership is simply wrong, and yet this happens year after year. As more Pennsylvanians leave the corporate-funded parties to register as Independent or 'third party' voters, this issue becomes especially relevant to our political climate."