Green Party supports the Call to Action on Puerto Rico 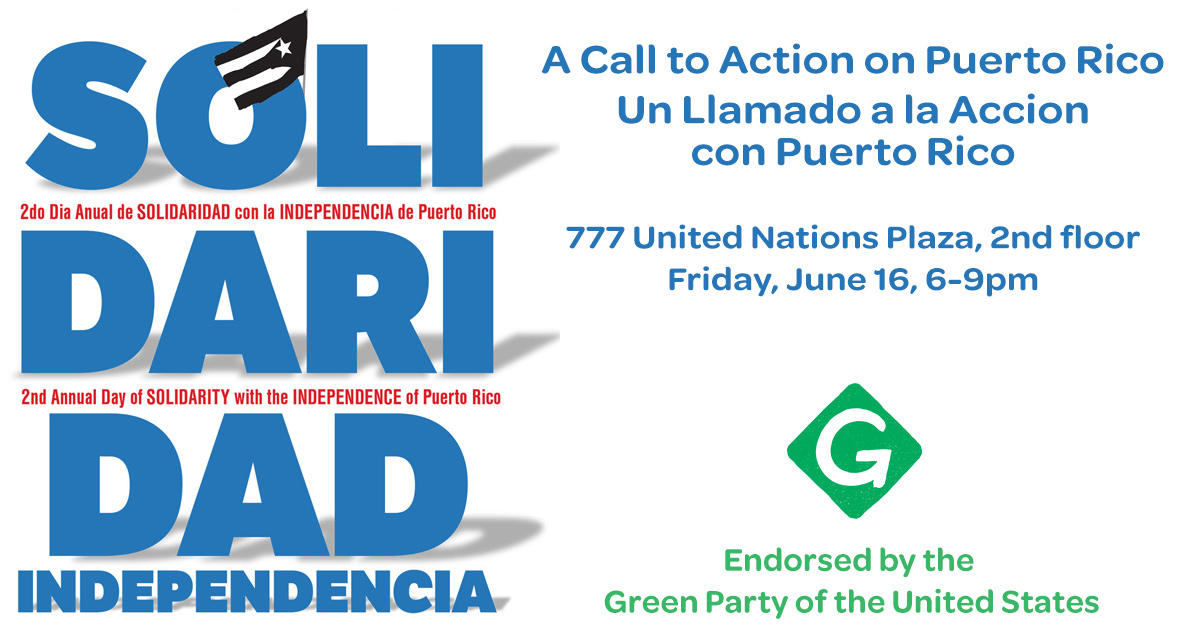 The Steering Committee of the Green Party of the United States has endorsed A Call to Action on Puerto Rico / Un Llamado a la Accion con Puerto Rico.

This 2nd Annual Day of Solidarity with the Independence of Puerto Rico takes place on Friday, June 16, 2017 from 6:00 pm – 9:00 pm. The event will take place on the 2nd floor of 777 United Nations Plaza in New York City.

Darlene Elias, a member of the National Party Steering Committee, will appear before the Decolonization Committee of the United Nations or Comité de Descolonización Organización de Naciones Unidas on June 16th.  Ms Elias states "I will be making the case for the decolonization and or self determination for Puerto Rico". The hearing will be streamed at http://webtv.un.org.

In 1898, Puerto Rico was invaded by the United States and has been held by the U.S. in the form of a colony ever since. In response to international pressure, in 1952, the U.S. established the "Free Associated State" status for Puerto Rico but continued to claim that Puerto Rico belongs to, yet is not a part of, the United States. The root of the crisis is the colonial status of Puerto Rico as echoed in the UN Decolonization committee resolution on Puerto Rico adopted on June 22, 2015 which states ñthe condition of political subordination prevents Puerto Rico from taking sovereign decisions to attend to its serious economic and social problems including unemployment, marginalization and poverty (Olga Sanabria Davila, Crisis and Colonialism in Puerto Rico, 10/26/15).

Greens support the right of the people of Puerto Rico to self-determination and independence in conformity with United Nations Resolution 1514(XV) of 1960. Greens call for the release of all Puerto Rican political prisoners, such as Oscar Lopez Rivera, who has been held in U.S. prisons since 1981.

Greens call for the appropriate environmental clean-up and sustainable development of Vieques, the island that was used as a firing range by the U.S. military. Greens oppose recruitment of the youth of Puerto Rico into the U.S. armed forces and their deployment to U.S. wars abroad, and denounce recruitment attempts at educational institutions.

Thus, these measures are not a solution.