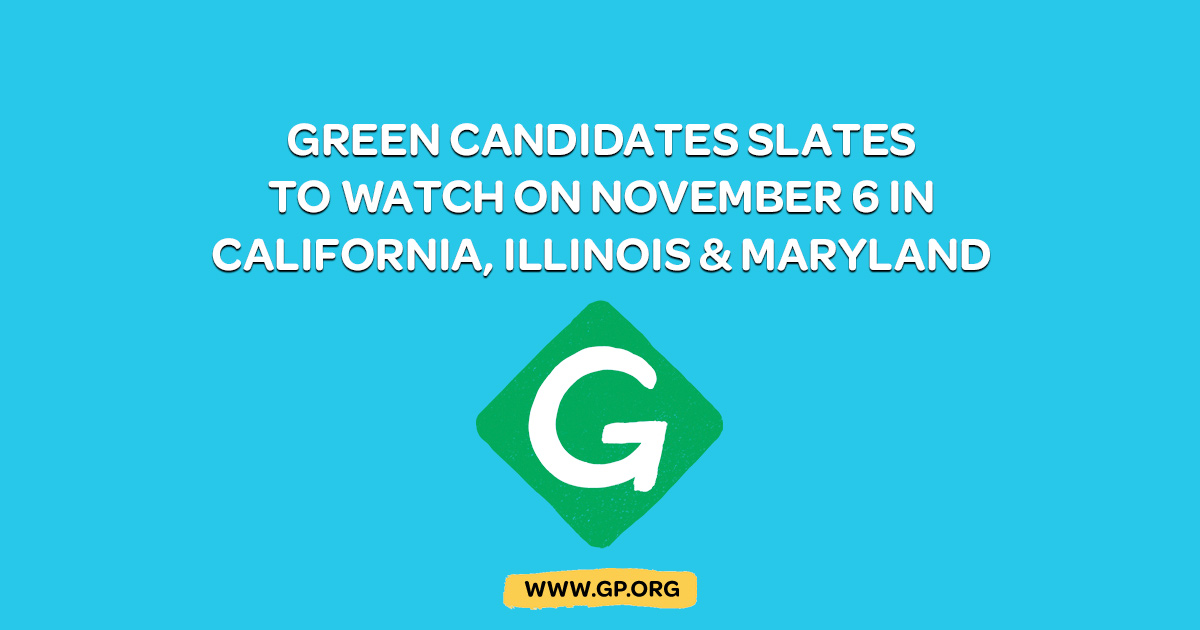 The Green Party of the United States has identified "Green Slates to Watch" on Election Day, Nov. 6, 2018. The candidates in these slates in California, Illinois, and Maryland are running to make inroads for the Green Party in particular areas of the country and to overcome the hurdles faced by individual candidates.

The following candidates deserve special mention as a group for being the only Green Party candidates to overcome the hurdle of California’s “Top Two” ballot requirement. The requirement was enacted in 2010 for statewide and congressional races, and only the top two vote-getters in the primary appear on the ballot, regardless of party affiliation. Dr. Rodolfo Cortes Barragan, U.S. House of Representatives, District 40, and Kenneth Mejia, U.S. House of Representatives, District 34, both running in Los Angeles, got on the ballot based on their vote count in the primary. A third candidate, Laura Wells, running for the U.S. House of Representatives in District 13 in San Francisco, got on the ballot through a successful write-in campaign. All three are running against Democrats with no Republicans in the race, so their races offer an opportunity to measure raw support for the Green Party.

The Green for Congress Against Barbara Lee: Q&A with Laura Wells

The historically Green Humboldt County has six candidates with two incumbents running for city council, community service and school board. This slate forms a strong working group that is organizing locally and collectively.

Five Chicago Greens are running as a slate for the Metropolitan Water Conservation Board on a unified platform. The board serves as a major hub in the "Chicago machine" of patronage jobs and contracting, so electing the Greens to the board would be a powerful foot in the door for reform. The candidates are Chris Anthony, Geoffrey Cubbage, Karen Roothaan, Tammie Vinson, and Rachel Wales.

Five Greens are running for County Commissioner seats in Maryland with odds considered much more promising than usual for partisan races. Two of the five have no Democratic opponent and one has no Republican opponent. The candidates are: