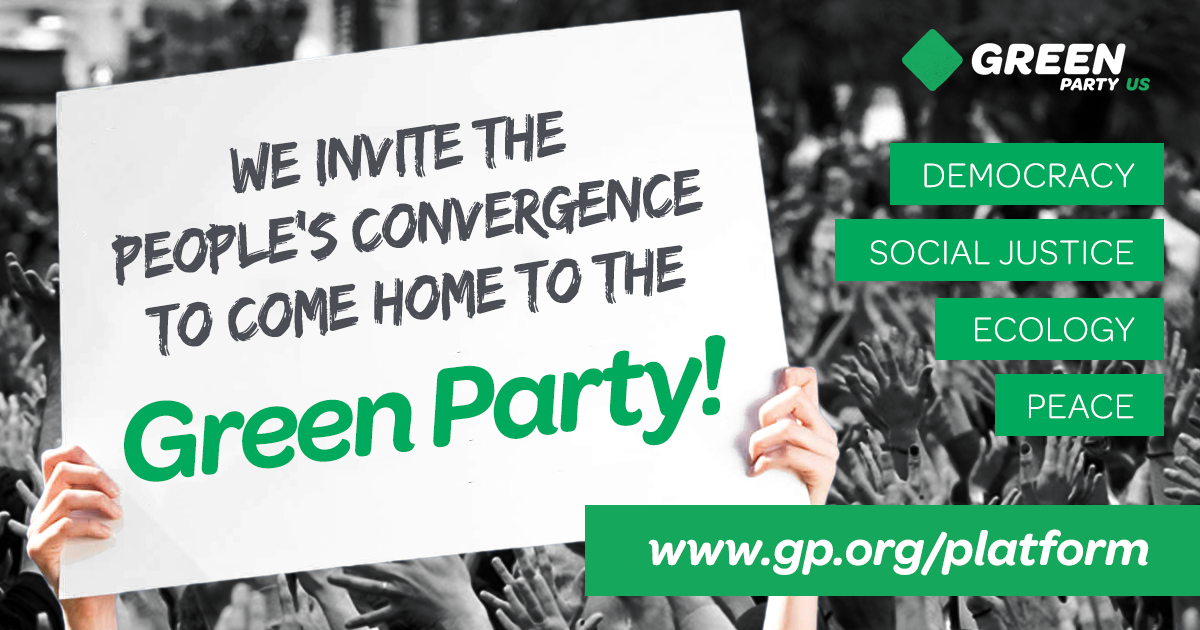 WASHINGTON, D.C. -- Green Party leaders are challenging organizers and voters convening in Washington, D.C., to discuss founding a new progressive party centered around Bernie Sanders to recognize that such a party already exists and to "Go Green."

The "People's Convergence" is meeting from September 8 through 10 at American University and will present a "Draft Bernie" petition to Sen. Bernie Sanders that asks him to lead a new People's Party.

"Why reinvent the wheel? Come home to the Green Party" say Greens as the People's Convergence conference begins in Washington, D.C.

"The Draft Bernie movement is right when they say that the two ruling parties have failed the American people and that 'We the People' need an alternative party. The new party must be committed to social and economic justice, peace, and the health of our planet. It must be a working people's party that rejects corporate money and influence. Greens have already established that party," said Darryl! L.C. Moch, co-chair of the Green Party of the United States.

"We invite the People's Convergence to come home to the Green Party," said Mr. Moch.

Greens plan to attend the People's Convergence and let participants know that the Green Party has FEC recognition, ballot status in most states, a grassroots base of voters and elected officials, and a strong platform.

"48,000 signatures on the Draft Bernie petition is a great display of support. Greens gathered far more and got them notarized for ballot access in 2016. Illinois Greens collected 53,000 signatures on paper petitions within 90 days. 110,000 people signed Jill Stein's online petition for Open Debates," said Michael Dennis, co-chair of the Green Party. Dr. Stein was the Green nominee in 2016.

"Bernie has said he's unwilling to be a 'spoiler'. Deadlines are approaching for ballot status in 2018, which is essential for preparing a party for participation in the 2020 national election. Saddled with these challenges -- and with a prospective candidate who'd probably withdraw rather than interfere with the next Democratic nominee's ability to win the White House -- it might be too late for a new People's Party to compete effectively in 2020," said Mr. Dennis.

(1) Bernie Sanders isn't interested. He has said so repeatedly.

Mr. Sanders has ignored attempts by the Green Party to communicate with him over the years, including inquiries about his interest in running for president as a Green. His continuing rebuff of both the Green Party and the Draft Bernie movement indicate that he has no interest in overturning the two-party status quo.

If Mr. Sanders changes his mind in 2018 or 2019, it'll be too late for the Draft Bernie timeline's plan for a campaign with 50-state ballot access.

(2) Why reinvent the wheel? The Green Party already exists, has a strong progressive platform and FEC recognition, has experience and expertise in party organizing, and is established in most states. Greens have won hundreds of local elected races and hold "campaign schools" to help Green candidates win elections.

"It takes years to win ballot access across the country and it's equally difficult to maintain ballot status in many states. Greens have already accomplished the hard groundwork. It's naive to believe that a new party will avoid the internal and external obstacles, including the inevitable controversies and temporary setbacks that are part of organizing, that the Green Party has already weathered," said Jody Grage, secretary of the Green Party and co-chair of the party's Ballot Access Committee.

(3) New parties centered around a single national figure are short-lived, as the history of third parties from Theodore Roosevelt's Bull Moose Party to H. Ross Perot's Reform Party has shown.

"You don't sustain a national party on charismatic leaders who run for the White House," said Adrian Boutureira, who serves as national political organizer for the Green Party. "You build a party's foundation at the grassroots level, with state and local parties that run candidates for state and local office and with local political activism. Presidential campaigns are a necessary part of that effort, but any party that makes involvement in the presidential election spectacle the measure of its success is doomed to fail."

Greens have won races for local office even when Green presidential contenders have drawn very small percentages on Election Day, assuring permanence for the party as it grows nationally. At least 136 Greens currently hold elected office in 18 states. In 2016, Jill Stein and running mate Ajamu Baraka were on the ballot in 45 states, with three more states giving them write-in status.

"A new party's presidential candidate will face all the same barriers that our Green nominees have dealt with, beginning with ballot access laws designed by Democratic and Republican state legislators to hinder alternative parties. The Commission on Presidential Debates, which is controlled by the two major parties, will bar Bernie Sanders from the post-convention debates," said Green Party co-chair Gloria Mattera.

"If he runs a well-organized campaign, Bernie will face the Democrats' penchant for smearing anyone who doesn't back their frontrunner. Jill Stein has been the target of evidence-free McCarthyite allegations by some Dems who want to link her campaign with Vladimir Putin. Bernie himself came under fire merely for competing with Hillary Clinton for the 2016 Democratic nomination -- which turned out to be rigged against him by the DNC," said Ms. Mattera.

"Here in Colorado, many former Sanders supporters are now enthusiastically involved in our state Green Party, holding leadership roles and building locals. They've moved beyond the need to draft Bernie," said Andrea Mérida Cuéllar, co-chair of the Green Party of Colorado and co-chair of the national party.

Greens are also wondering how a new Sanders-based party would handle their leader's retreats from progressivism, especially on foreign policy and military spending. Mr. Sanders has faced criticism recently for incorporating copays into his Single-Payer national health care legislation.

"Thoughts on why a stand-alone DraftBernie strategy doesn't make sense even if one really did want to DraftBernie"
Michael Dennis, Green Party steering committee member