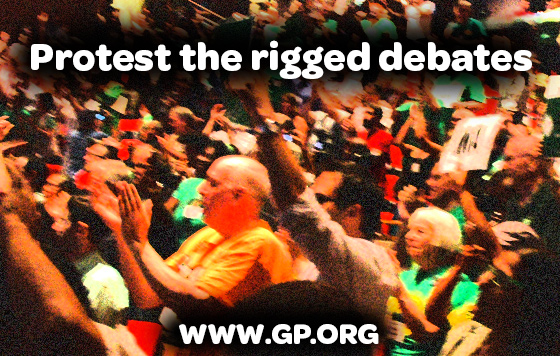 WASHINGTON, D.C. -- Green Party leaders are urging voters across the U.S. to express their anger in response to an announcement from the Commission on Presidential Debates (CPD) on Friday that alternative-party candidates would be barred from the debates.

"Voters deserve the right to know about all the candidates who'll be on the ballot on Election Day. The CPD has violated that right by rigging the debates. Americans should protest loudly and demand that control over the debates be taken away from the CPD," said Dr. Cecile Lawrence, co-spokesperson for the Green Party's National Women Caucus and 2010 candidate for U.S. Senator from New York.

Protest planned at the first debate site on Sept. 26 against "fraud on the American voter"

Greens: CPD violates voters' right to know about all candidates on the ballot; LWV and news media should host fair, inclusive debates

Green presidential nominee Jill Stein and running mate Ajamu Baraka have published a call for protest and civil disobedience at Hofstra University in Hempstead, Long Island, the site of the first debate on Monday, September 26 ( http://www.jill2016.com/hofstra_debate_protest ).

"The CPD is not an impartial nonpartisan group. It's controlled by Democratic and Republican party leaders who want to keep the political field limited to their own parties and nominees. That's a gross conflict of interest. The CPD shouldn't be running the debates," said Ms. Willebrand.

Greens said that any candidate with ballot lines in enough states to win, if enough voters voted for him or her, should be admitted to the debates. Based on this criterion, Dr. Stein and Libertarian nominee Gary Johnson and their running mates are qualified to participate in the debates.

"We invite all those who supported Bernie Sander's political revolution during the primaries to join our demand for fair and open debates. Without Dr. Stein and Mr. Baraka, many ideas expressed by Mr. Sanders, like Single-Payer health care and restoring the Glass-Steagall Act, will be censored from the debates. No movement can survive if it participates in the silencing of its own agenda," said Bahram Zandi, co-chair of the Green Party of the United States.

Talking Points on the Debates

Greens and others are urging the League of Women Voters and the news media to sponsor debates that admit all candidates who are on the ballot in enough states to win.

Opinion polls confirm that a super-majority of Americans favors inclusion of alternative-party candidates in the debates. The polls reflect widespread public disapproval for Hillary Clinton and Donald Trump and dissatisfaction with both of the major parties.

The CPD decided on an arbitrary 15% threshold in the polls for admission to the debates after witnessing Minnesota gubernatorial candidate Jesse Ventura's victory in 1998. Mr. Ventura, an independent, was initially dismissed as "not viable" with about 3% in the polls. After he participated in a debate, his poll numbers soared and won the election. In 2000, the CPD imposed the 15% requirement so that Al Gore and George W. Bush wouldn't have to face Mr. Nader and Pat Buchanan in the debates. (Reform Party candidate H. Ross Perot participated in 1992 with 7%.)

The CPD took over the debates from the League of Women Voters in 1988. The CPD, run by Democratic and Republican party leaders and corporate sponsors, enacted rules to exclude alternative party nominees and independents from the debates, as internal CPD memos show. The LWV has called the debates "a fraud on the American voter."

More: George Farah's book "No Debate: How the Republican and Democratic Parties Secretly Control the Presidential Debates," summarized at http://projectcensored.org/20-secret-control-of-the-presidential-debates

It is undemocratic to exclude me and Gary Johnson from presidential debates
By Jill Stein, The Guardian, September 6, 2016
https://www.theguardian.com/commentisfree/2016/sep/06/jill-stein-presidential-debates-undemocratic-gary-johnson

Jill Stein Should Be Part of a 4-Way Presidential Debate
By John Nichols, The Nation, August 19, 2016
https://www.thenation.com/article/jill-stein-should-be-part-of-a-4-way-presidential-debate