A Green state of the state message 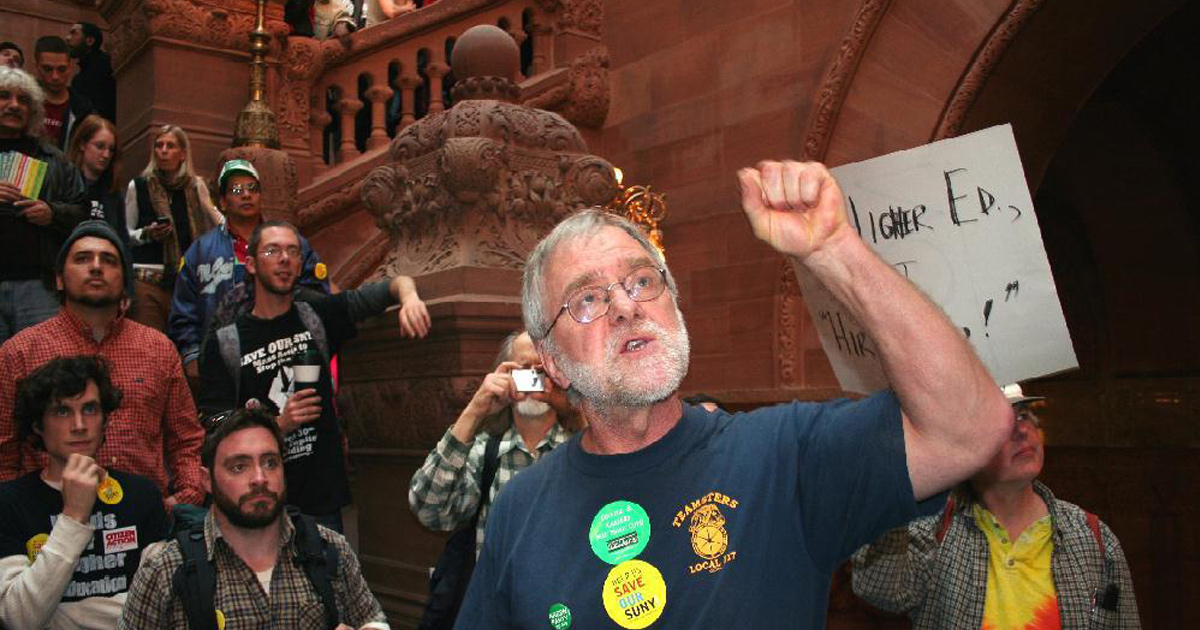 New York can lead the nation and the world toward economic justice and ecological sustainability. Our state can be an inspiring example of full employment at living wages, health care for all, affordable housing, quality public education, and 100 percent clean, climate-stabilizing energy.

With a gross domestic product of $1.5 trillion, New York would have world's 11th largest GDP as an independent nation, ahead of countries like Russia and South Korea. New York has a strong economic foundation on which to build a sustainable prosperity for all.

The Green Party would use progressive taxation, public goods and services, and economic democracy to turn around the growing inequality of wealth, income and political power and the acceleration toward climate catastrophe.

The Greens would promote worker cooperatives where workers keep the full fruits of their labor. They would create democratic public enterprises in energy, broadband, banking, and health insurance in order to lower the costs of living and doing business. They would build an ecological socialism based on economic democracy – cooperatives, public enterprises, public planning, and markets free of monopoly profiteering and predatory finance – in order to provide a decent standard of living for all on an ecologically sustainable basis.

New York faces a budget deficit of $4 billion to $8.6 billion and that is before taking into account billions more in revenue that will be lost due the recent federal tax reform package. When Governor Cuomo faced a $10 billion budget deficit upon taking office in 2011, he pushed an austerity budget of cuts and caps to spending, taxes, and state workers, claiming, "I am a progressive who's broke."

Cuomo's socially progressive but economically conservative centrism is typical of Democratic Party leaders and funders. Like their Republican counterparts, Democratic leaders offer no viable program for reversing the polarization of income and wealth that has grown steadily since the 1970s, or for aggressively addressing the existential threat of climate change.

The Green Party believes we can do better. In 2018, we will be advocating transformative economic and environmental reforms, including the following:

Plan for 100 Percent Clean Energy: The peril of climate change is upon us. Climate scientists tell us that to keep the rise of global temperature above the pre-industrial level at below 1.5 degrees Celsius (2.7 degrees Fahrenheit) in order to avoid runaway global warming, the world must cut greenhouse gas emissions by 15 percent per year starting in 2020. Stanford and Cornell scientists and engineers have documented that it is technically and economically feasible for New York to make the transition to 100% clean energy by 2030. Building the clean energy system would create 4.5 million jobs while lowering electricity costs by more than half. A state public power utility would be essential for planning the technology transition and reinvesting earnings from fossil and nuclear energy as they are phased out into clean energy. New York can and should provide national and world leadership on this central issue.

Enact a Public Health Care Plan: The New York Health Act will provide all medically necessary services to all New Yorkers at lower cost through a single-payer public health care plan. It will lower costs by cutting multi-payer administrative waste and the monopoly profits of private insurance, drug, medical equipment, and hospital companies. Financed by progressive payroll taxes instead of private insurance premiums, 98 percent of all New Yorkers will save money. It will cut the costs of healthcare for state and local government employees by 75 percent or more, radically reducing the biggest single factor driving up the costs of government. The state assembly has passed the bill twice and it is one vote short of passage in the state senate.

Fully Fund and Desegregate Public Schools: The state should stop underfunding high-poverty school districts and resisting lawsuits for equitable funding in the courts. It should end its test-punish-and-privatize agenda that uses high-stakes testing to define students, teachers, and schools in high-poverty districts as failing in order to justify their conversion to privately-managed charter schools. Desegregation of schools by race and class is the only proven way to close the race and class achievement gaps as measured by standardized tests. Desegregation also improves other important educational outcomes for all students – poor, working class, and middle class alike — including, intellectual self-confidence, leadership skills, critical thinking, creativity, problem-solving, and teamwork. It is time for the state to drop the costly gimmicks of "accountability" testing and charter schools and do what works: fully-funded, integrated public schools.

Build Affordable Housing: 51 percent of renters and 34 percent of homeowners in New York pay more than the federal affordability standard of 30 percent of income for housing. The private housing market is not providing enough affordable rental housing. Unfunded state mandates have driven up local property taxes for homeowners. Moreover, housing segregation in New York's metropolitan regions is among the highest in the nation by race and class. The state should radically expand desegregated, mixed-income public housing toward providing 15-30 percent of all housing units as many western European countries do, compared to less than 1 percent in the U.S. The state should also pay for its unfunded mandates on local governments so that property taxes can be reduced for homeowners.

Invest in Public Transportation: The state should invest billions to improve and expand the mass transit system statewide alongside requiring all vehicles to be carbon free within 15 years.

Ban Plastic Bags: Polyethylene plastic carryout bags are energy intensive and a major source of litter, landfill, and pollution. They never decompose biologically. They break up into tiny microplastics that end up in the ocean and consumed by wildlife, often causing death and otherwise bonding with toxic pesticides and pollutants that move up the food chain and into our seafood. New York should join such countries as China, India, Italy, and South Africa in banning them.

Tax the Rich: If New York were to return to the more progressive personal income tax it had in the early 1970s, working and middle class New Yorkers would get a tax cut and the state would still raise at least $8 billion more in revenues. Instead of immediately rebating the stock transfer tax to traders, the state should keep its $15 billion revenues for public purposes. $8 billion for ineffective corporate welfare could be cut. The New York Health Act would save the state billions by cutting the costs of its employees' health care. By restoring state revenue sharing to former levels to pay for unfunded state mandates, which are driving many cities, towns, and counties toward bankruptcy, New York's local governments could fully fund their services and still cut their highest-in-the-nation property taxes. There is plenty of money in New York's economy to fund a progressive economic transformation. What's missing is the election of new politicians to office who are not beholden to their wealthy campaign contributors.

Enact Public Campaign Financing: In order to free state government from control by wealthy special interests and pay-to-play corruption, election and ethics reform must include full public financing of state elections on the model used by Arizona and Maine. In this system, ballot-qualified candidates who opt in receive a public campaign grant sufficient to communicate their message to all voters in their district. They cannot raise and spend private money. They only use clean public money. The Democrats' bill for partial public campaign financing through matching funds for small donations leaves in place unlimited private campaign financing. It's just adds some public financing as a cover for the same old system of legalized bribery. It's a reform that doesn't reform.

Howie Hawkins was the Green Party candidate for Governor of New York in 2014.