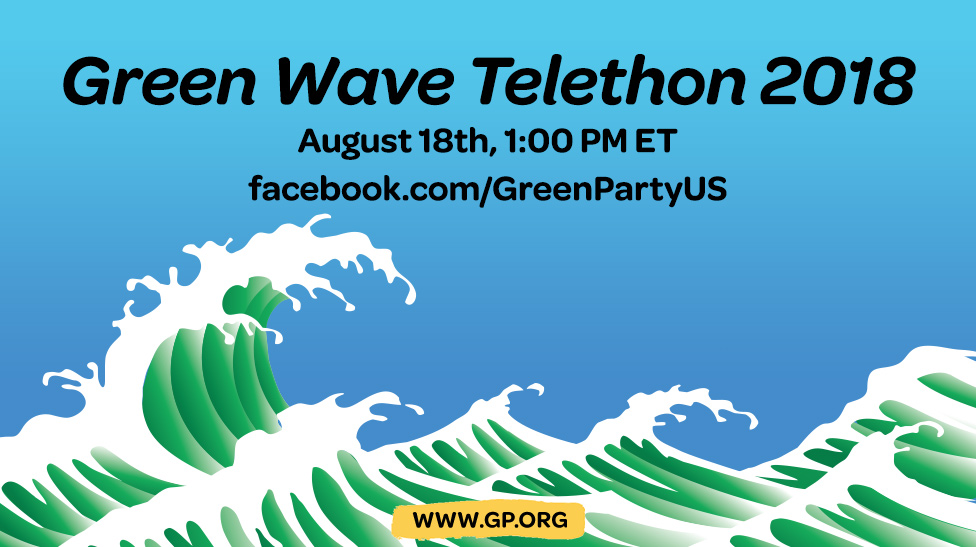 The Green Party of the United States (GPUS) is excited to announce our first national Green Wave Telethon. On Saturday, August 18th, tune in for live interviews with candidates from across the nation, hosted by David Cobb, Philena Farley and Erin Fox. The telethon will take place at https://www.facebook.com/GreenPartyUS/.

"The Green Party is a people-powered movement," said Holly Hart, Co-chairperson of the Coordinated Campaign Committee.

"We want voters to know the Green Party doesn't take donations from corporations, Political Action Committees or special interests. Therefore, we are not beholden to big money interests and their wealthy backers." said Hart, "Instead, we are people-powered and rely on the individual contributions of voters to fund our candidates campaigns. We are funded by the people and that's who our candidates will answer to when in office."

Meet dozens of Green candidates and supporters from across the country including Kenneth Mejia, Constance Gadell-Newton, Laura Wells, Elijah Manley, plus many others who will appear via video.

"It's important for voters to realize that the Green Party is running a diverse slate of great candidates for offices at every level, all across America," states Erin Fox, Co-chairperson of the Coordinated Campaign Committee and one of the telethon's hosts.

"The Green Party is proud of the efforts that our candidates are making across the nation to introduce voters to Green Party values. We are a political movement that puts people and planet first and that's reflected in our slate of excellent candidates running for office nationwide." Fox continues, "We urge voters to tune in to the telethon and learn more about the most progressive political candidates in the country. Greens are prepared to bring about changes that the average voter has been seeking and our candidates want to represent the will of all voters, not just the elite few in our society. On behalf of the CCC and all of our candidates, we hope that you will tune in to watch. We need as many voters as possible to get engaged and become a part of this movement for real political change."

Tune in for more information about how you can support Green candidates and get involved with the party's next Green Wave of volunteers in September.

To donate to the CCC campaign fund, visit www.gp.org/givenow.