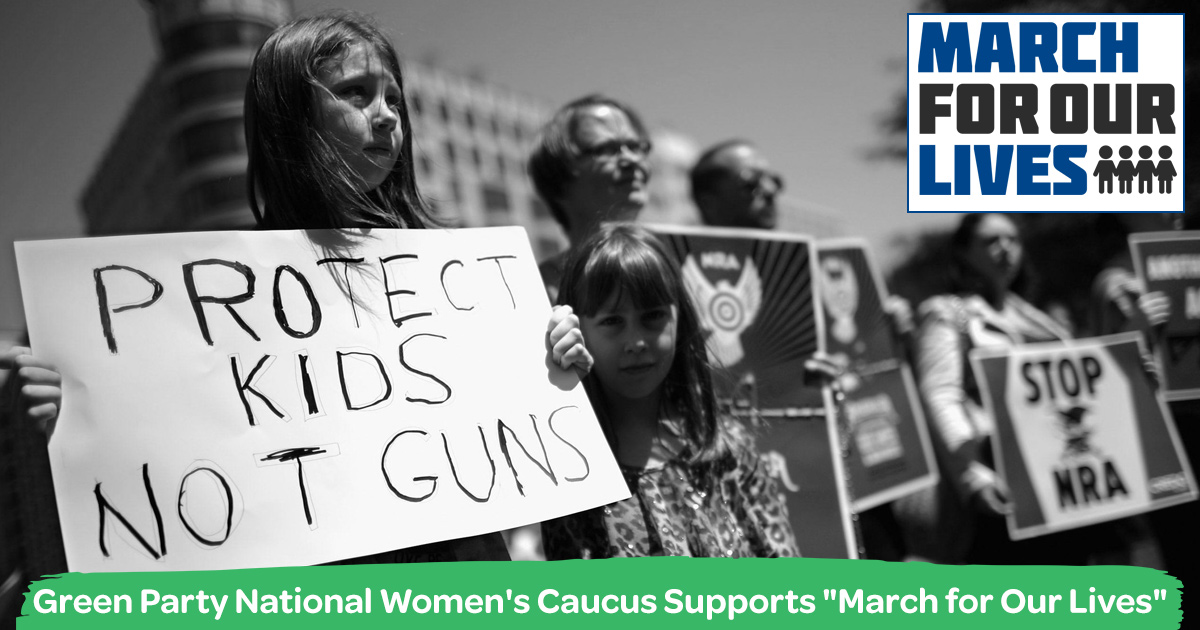 The Green Party of the U.S. National Women's Caucus calls on Greens to support the March 24th "March for Our Lives" and other student walk-outs in protest of gun violence in their schools in the wake of the horrific mass murders at Marjory Stoneman Douglas High School in Parkland, Florida, on February 14, 2018, where 17 people were killed and 14 more people were wounded. It is long past the time to listen to our children.

National Women's Caucus of the Green Party of the United States
https://www.facebook.com/GreenPartyWomensCaucus/

"Greens, especially Greens running for office, need to turn out for these events, as put together by students," urges caucus member Claudia Ellquist. "Instead of repeating what WE already know, it's time for us to simply show up, lend support, let the kids have the microphone. That is what I, personally, intend to do. This is the time to follow, not to just send out press releases to the public."

Sadly, slayings at our schools where we trust that our children will be safe and protected appear to be on the rise. The Chicago Tribune has written that between 2000 and 2010, of the recorded 57 shooting incidents in 36 countries, 28 of them occurred in the United States.

Caucus member Dee Murphy states, "There should be no question in anyone's mind why Greens should not only support the 'March for our Lives' student walkout, but that every Green in every corner of US society is called on to advocate for our Pillar of Nonviolence in whatever capacity we can: whether it is writing letters to Congress, organizing within our communities to lobby and petition legislators for change, or running for office to enact the immediate changes that need to be made in regards to gun violence in our society."

The National Rifle Association has opposed measures to fund research to account for America's gun epidemic.

Caucus member Nancy Allen points to a remark by Marjory Stoneman Douglass, the woman for whom the Parkland School was named: "Be a nuisance where it counts. Do your part to inform and stimulate the public to join your action. Be depressed, discouraged, and disappointed at failure and the disheartening effects of ignorance,greed, corruption and bad politics – but never give up."

The Green Party Platform calls for the elimination of loopholes that permit sale of weapons without background checks, and for efforts to prevent violent crime. Caucus member Genevieve Marcus draws a connection between incidents such as the recent shooting in Florida and the tolerance of violence in our society: "With all the recent school shootings in the country, with all the killing of suspects and abuse of prisoners and most women, with a foreign policy of constantly expanding, endless wars, with children being sold as slaves, even with animals being cruelly tortured and killed, isn't it time for the people of the United States to start think seriously about Nonviolence? How much more degraded can we get?"

"Who Was Marjory Stoneman Douglas"

"Why gun violence research has been shut down for 20 years"

"The NRA has blocked gun violence research for 20years. Let's end its stranglehold on science"