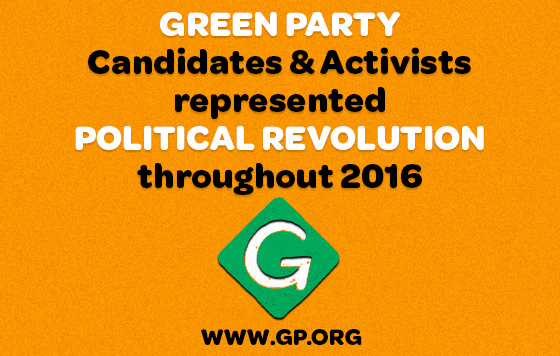 Post-election message from Jill Stein and Ajamu Baraka
"Unite and Fight: Empathy, Appreciation, and a Call to Action"

"The Green Party and Green candidates and activists represented political revolution throughout the 2016 election year. We'll continue to do so during the next four years and beyond," said Jill Stein, the Green Party's 2016 nominee for president.

"For Greens, political revolution means supporting front lines of struggle from Black Lives Matter, to pipeline blockades, ending immigrant deportations and bailing out students. It also means fighting Sen. Charles Schumer's corporate tax break proposal as well as the Trump-Pence agenda. It means offering a Green alternative to neoliberalism, white supremacy, and the two-party political establishment that made the election of someone like Donald Trump possible," said Dr. Stein.

Protest and organizing are imperative in defense of the rights of Muslims and undocumented immigrants. The next four years should bring a revival of activism for LGBTQIA and women's reproductive rights.

The leadership of groups like Black Lives Matter is especially important in defense of young black and brown people facing police violence, prosecution resulting from the racist drug war and profiling policies, and incarceration in a deeply biased justice system. All of these may worsen under President Trump.

After Barack Obama's election in 2008, progressives gave him a pass and the anti-war movement nearly died, even though the Obama Administration maintained the Bush-Cheney doctrine of endless war. But new movements soon emerged to fight the Keystone XL pipeline (successful), Trans-Pacific Partnership (apparently successful), and the Dakota Access Pipeline (ongoing).

"The pipeline protests are inspirations for a mass nonviolent resistance movement during the next four years. Greens -- including nominees Jill Stein and Ajamu Baraka -- participated in civil disobedience against the Dakota Access Pipeline," said Chris Blankenhorn, co-chair of the Green Party of the United States. Mr. Blankenhorn is working with a local First Nation activist to plan the "Water is Life, We All are One People: Illinois Stands with Standing Rock" rally in Springfield, Illinois on Nov. 23.

Donald Trump has dismissed climate change as a hoax. Greens call for intense organizing to inform the public about the global threat and to challenge Mr. Trump's dangerously ignorant positions on science and support for the fossil-fuel industry.

"The Green New Deal, which Green candidates have promoted since 2010, remains a model for the kind of economic reorganization that the country needs to stop the advance of global warming. Donald Trump's know-nothing intransigence and Democratic compromises and capitulations have taken us in the wrong direction," said Aaron Renaud, co-chair of the Green Party of Texas.

Opposition and protest would also have been necessary against Hillary Clinton's agenda, had she been elected. Ms. Clinton's support for continued drilling and fracking and her public statement on the Dakota Access Pipeline, in which she took no position, suggest what kind of leadership against climate change we'd have seen under a new Clinton Administration.

Contrary to some media reports, demonstrations, school walk-outs, blocking traffic, and acts of civil disobedience are not riots. Greens call on police departments to respect the rights of all those participating.

Activist movements can be greatly augmented via the electoral system. A political party like the Greens can assist in bringing the platform of the street to lasting policy. The Green Party hopes that movements never cease their activism; Greens will stand with them all along the way.

"The Green Party has kept alive the goals of the anti-globalization movement that began in Seattle, the Bush-era movement against the Iraq War, and Occupy Wall Street and will continue to do so whether Republicans or Democrats control the White House and Congress," said Ajamu Baraka, the Green Party's vice-presidential nominee in 2016.