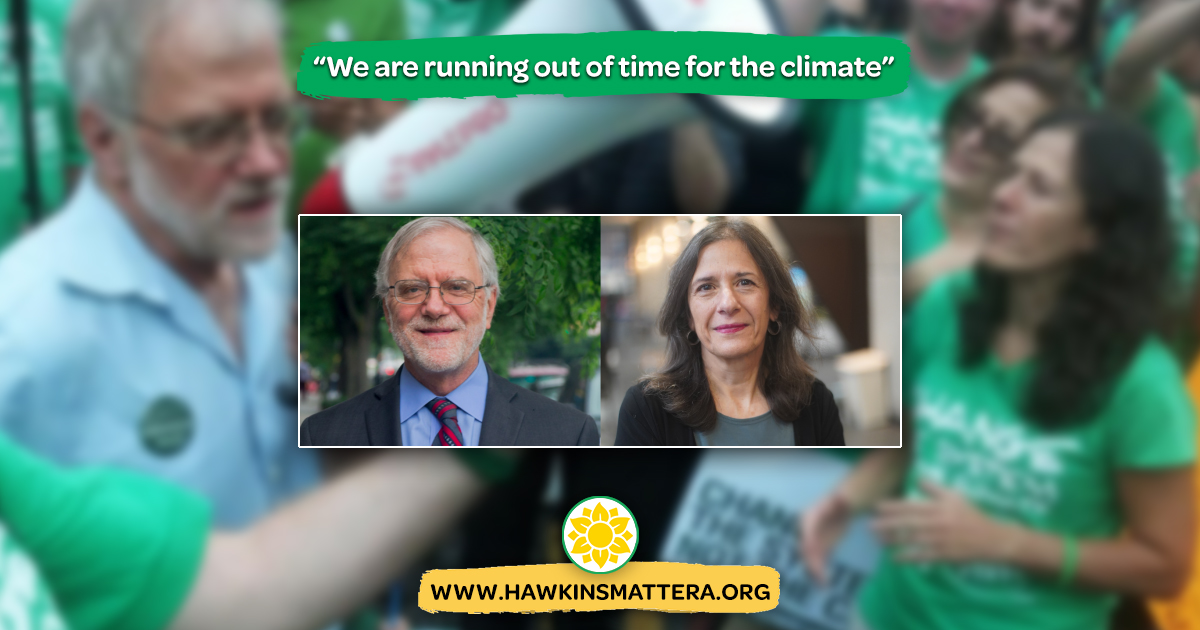 Although on Tuesday Manchin withdrew his bill from the pending must-pass spending bill, Biden and Schumer immediately stated their support for passing a version of the bill by the end of the year.

The Green Party candidates also took to task Governor Kathy Hochul on climate policy, noting her failure to sign the Cryptomining Moratorium bill, her opposition to the All-Electric Buildings and Build Public Renewables bills, and her failure to support the Polluter Pays bill or any measure to fund the climate actions required to implement the Climate Leadership and Community Protection Act enacted in 2019.

“Polls show overwhelming public support for a Green New Deal to make a rapid transition to 100% clean energy. But Democratic leaders like Biden, Schumer, and Hochul join the Republicans in opposing a Green New Deal. Instead of climate action in the public interest, they are promoting the special interests of the climate-destroying fossil fuel industry,” said Howie Hawkins, the Green Party candidate for Governor.

As the Green Party gubernatorial ticket in 2010, Hawkins and Mattera were the first candidates in the U.S. to campaign for a Green New Deal.

The Green Party candidates said that their Green New Deal program is an economic development and justice program as well as a climate safety program that can serve as a counterexample to the fossil fuel infrastructure boom underway across the world.

A UN Environment Program report last year said that governments currently plan to produce more than twice the amount of fossil fuels by 2030 than would be consistent with limiting warming to 1.5° C, the target endorsed by the UN’s 2015 Paris climate summit. $75 billion is currently being invested in 15,000 miles of new oil pipelines across the world, with the U.S. committed to the largest expansion.

“We are running out of time for the climate. New York’s economy would be the eleventh largest in the world if we were a nation. What we do matters. New York should be setting a powerful example for the nation and the world with a Green New Deal for New York,” said Gloria Mattera, the Green Party candidate for Lt. Governor.

“We have yet to see legislation, not even from progressive Democrats, to halt all new fossil fuel infrastructure, which is the first step we must take on climate policy,” Mattera said.

“Democrats woo climate voters by contrasting their stated concern for climate change to Republican climate denial. But their actions show them to remain committed to the all-of-the-above climate policy that is favored by their oil, gas, and nuclear industry campaign donors but is a catastrophe for the planet,” Hawkins said.