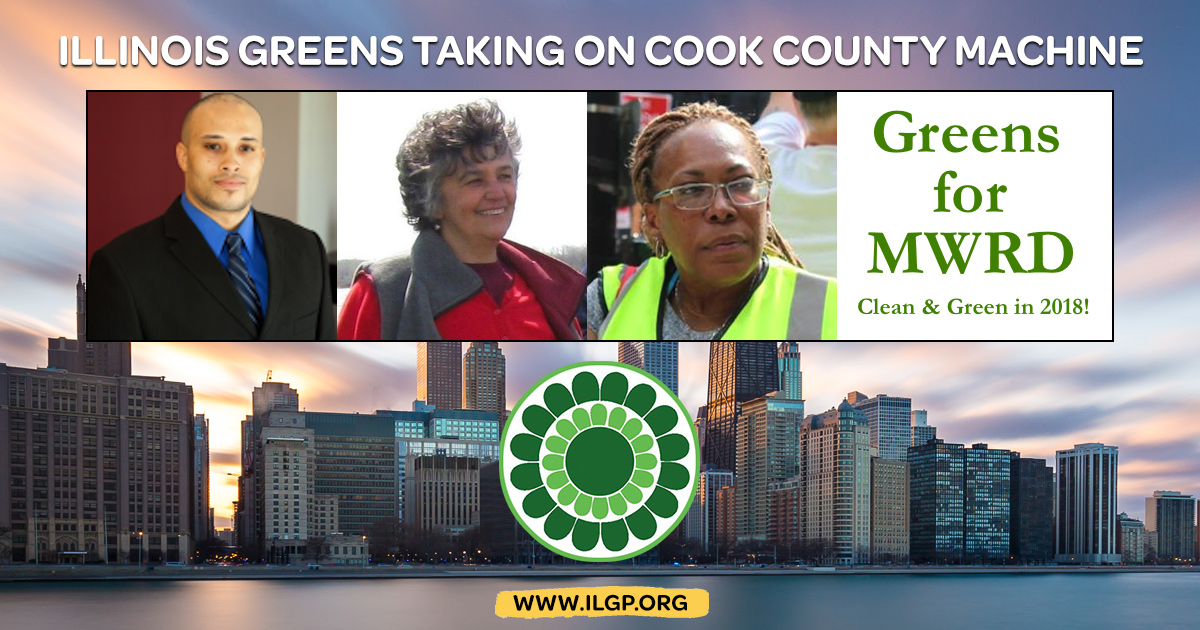 The Green Party doesn't often get a chance to run for majority control of an elected body in a single electoral cycle—but that's exactly how the Illinois Green Party is positioned for the November 2018 election in Cook County.

With five of the nine seats on Cook County's Metropolitan Water Reclamation District Board of Commissioners on the ballot in November, majority control of the billion-dollar, taxpayer-funded agency is suddenly in play. And as the only opposition party with five candidates filed for those five seats, the Green Party has a compelling case that voters tired of decades-long one-party rule by the Democrats should rally behind the Green flag in November.

The catch? Thanks to a decision by the Democrat-controlled Cook County Clerk's office, one of those five seats will only be available to candidates who participate in a special, write-in-only ballot line on their party's March 20th primary ballots. And in Illinois, a legal minimum for write-ins means that candidate Geoffrey Cubbage will need at least 1,720 Cook County voters to pull a Green Party ballot and correctly write in his name.

The party has promised a nation-wide fundraising outreach for the write-in primary, encouraging Greens and third-party supporters from all across the country to chip in at the campaign's donation page. Small-dollar donations don't just fund critical voter outreach, according to Illinois Green Party officers—they also demonstrate a robust supporter base to endorsing institutions like media outlets and issue-based advocacy groups.

Cook County political watchers know the MWRD's reputation as a patronage farm for the political machine: a source of multimillion-dollar contracts and cushy jobs for the well-connected, starting with the Commissioners themselves, two of whom employee their own children as $100,000/year "administrative assistants." The Greens for MWRD campaign promises reform, and five seats in play means they could follow through from a position of majority power, not just minority agitation.

It's an exciting opportunity for change in a city and county accustomed to decades of one-party rule, and it all starts with the fundraising push. Greens will have to turn out nearly 2,000 voters at the March 20th primary to secure a fifth name for the MWRD race on the November ballot.

With enough donations in the coming weeks, they just might do it—and make the November elections very, very uncomfortable for the Chicago machine.