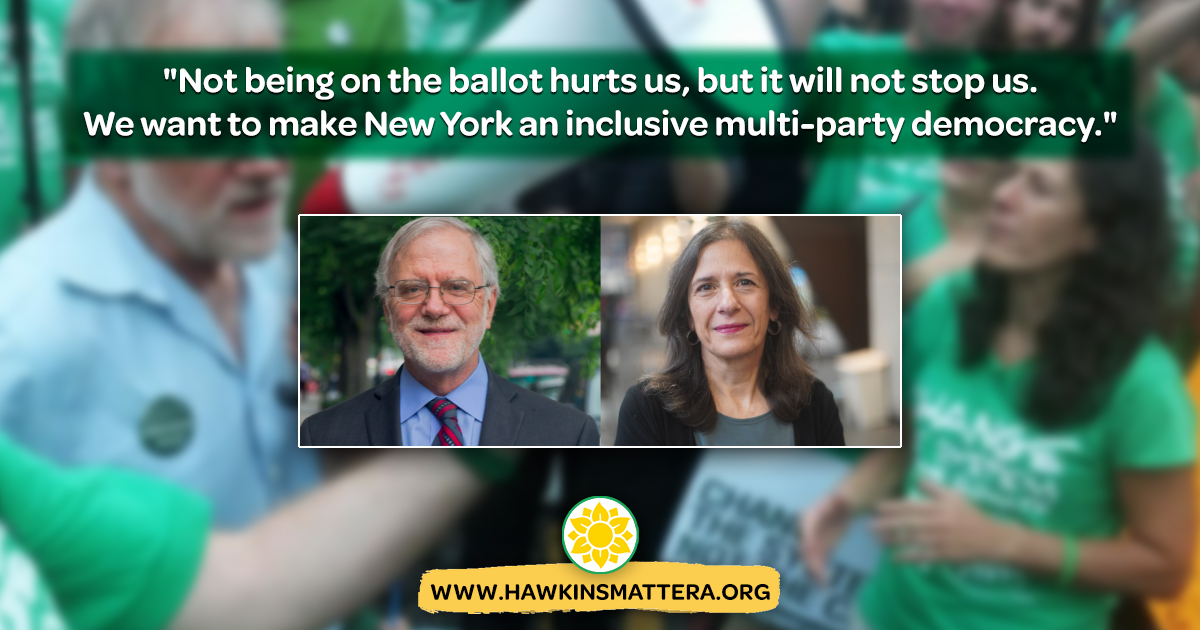 “We are not surprised that the objections were filed by Nassau County minions of the chair of the Nassau County and State Democratic committees, Jay Jacobs. Jacobs has been on a crusade to wipe the Green Party off of New York ballots. I don’t want to hear anymore hypocritical crocodile tears from anti-democratic Democrats like Jacobs about Republican attacks on voting rights. Party suppression is a form of voter suppression. It’s what authoritarian governments do. It is what Jacobs and the Democratic Party are doing,” said Howie Hawkins, the Green Party candidate for Governor.

Hawkins' running mate for Lt. Governor, Gloria Mattera, said, “Hochul, Jacobs, and the Democratic establishment are afraid of competition from their left. They know that the Greens’ progressive program of state-level Medicare-for-All, a real Green New Deal, taxing the rich, and affordable housing is more popular than their corporate program of privatized health care, fossil-fueled cryptomining, a billion for the Buffalo Bills billionaire, and rent hikes and evictions for landlords. They want to keep the Green Party off the ballot so that voters don’t have a progressive alternative to vote for.”

As a member of the 2019 Public Financing Commission, Jacobs pushed through highly restrictive ballot access requirements along with the public campaign financing proposal the commission was charged with developing. The New York Times called it “The Democrats' Secret Plan To Kill Third Parties in New York.”

That law was overturned in court for being beyond the commission’s power to enact. But with Jacobs cheerleading, then Gov. Cuomo pushed the ballot access restrictions law through as part of the April 2020 budget package while the legislature was only meeting virtually during the Covid lockdown.

The new restrictions doubled the frequency that parties must qualify for the ballot from gubernatorial races every four years to both presidential and gubernatorial races every two years. The votes needed to secure a ballot line were increased from 50,000 to 130,000 or 2%, whichever is greater. In the 2020 presidential race, 2% came to over 173,000 votes, or three and a half times more than the old requirement. As a result, every party that did not cross-endorse Biden or Trump lost their ballot line.

The petition signature requirement to get back on to the ballot was tripled from 15,000 to 45,000. That requirement is the most difficult in the nation because there are only 42 days to collect the signatures. Most states have no time limit on collecting ballot access petition signatures. Richard Winger of Ballot Access News has noted that "in 2020, not one independent candidate, and not one minor party, successfully completed any petition anywhere in the nation that exceeded 5,000 signatures, for any office.”

Adding to the burden of petitioning this year was the outbreak of two new Covid Omicron variants as petitioning started in late April and the Centers for Disease Control recommended indoor masking in most upstate counties. New York State made no reductions in signature requirements to compensate for the Covid pandemic as it did in 2020. Despite petitioning with a face mask and hand sanitizer in his back pocket, "Many people didn’t want to come near me and my petition clipboard because of the Covid outbreak," said Hawkins of Syracuse, which was the April epicenter of the new Omicron wave.

Jacobs and Cuomo both said after the 2020 election that eliminating all but the Conservative and Working Families parties, the fusion parties that normally cross-endorse major party candidates, was their objective all along. Jacobs said he wanted to eliminate “transactional parties.” The Greens contend that the transactional parties are the fusion parties that cut deals with the major parties in return for their ballot lines. The Green Party runs its own candidates independently of both major parties.

“Not being on the ballot hurts us, but it will not stop us,” Hawkins said. “We will be fighting to change these exclusionary ballot access laws and for inclusionary election reforms, including ranked choice voting for statewide offices and proportional representation in the state legislature. We want to make New York an inclusive multi-party democracy.”