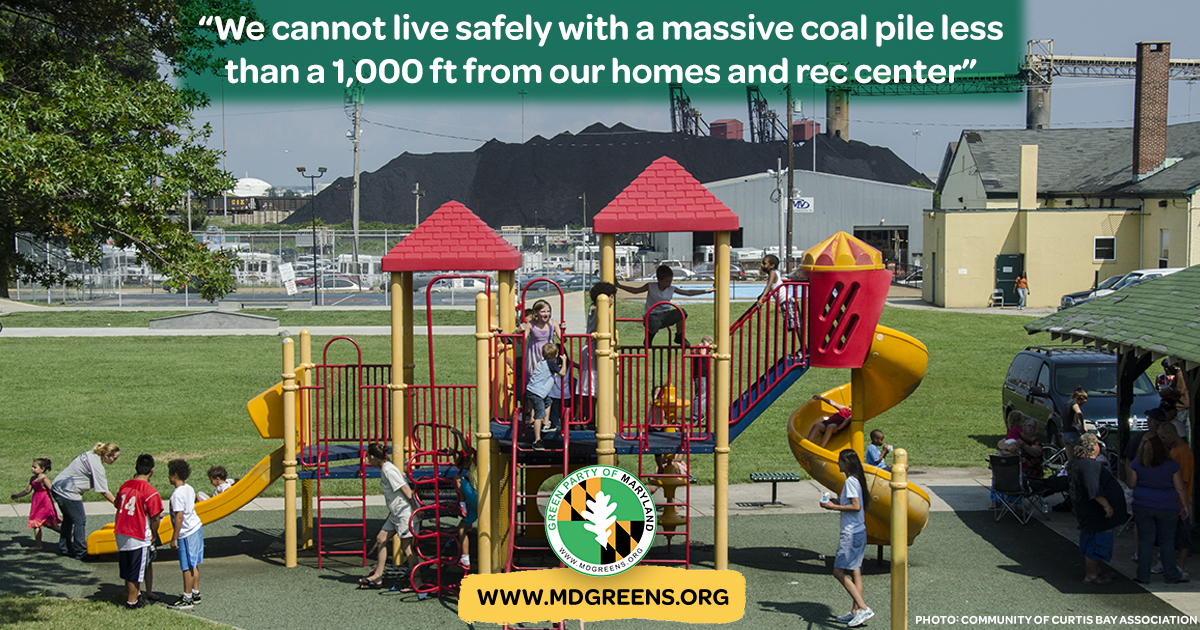 A group of Green Party activists joined others in a powerful No Coal for Christmas demonstration in the industrial neighborhood of Curtis Bay in southwest Baltimore.

The demonstration helped lead to a settlement, which was announced several weeks after the protest, between the Maryland Department of the Environment (MDE) and CSX. CSX will pay a $15,000 fine over an explosion in December 2021 and will pay a local nonprofit, the South Baltimore Community Land Trust, $100,000 for an environmental project. The fees are due to “the effect of the explosion on the neighborhood and the long-standing environmental injustices affecting Curtis Bay residents,” The Baltimore Sun reported. It's not clear if the residents of the area will be satisfied with this settlement because it leaves the coal yard unchanged.

Curtis Bay has been an industrial area for several generations and is now dominated by the CSX coal depot, which transfers coal—mainly from the northern Appalachian coal region to freighters--so that you see miles of cars loaded with coal on the railroads coming into Curtis Bay. The long term effects of the coal dust in the air have been severe for the residents, but an explosion in December 2021, strengthened opposition from the neighborhood and supporting political and environmental organizations.

"The CSX explosion was a reminder of what has already been known: we cannot live safely with a massive coal pile less than a 1,000 ft from our homes and rec center," said Curtis Bay resident Terriq Thompson. "We will use our own environmental justice and zero waste fund to build on the work we've already been doing for a decade, including a just transition to a material that can be stored and transferred safely. Until then we will not stop."

The first anticipated use of the fund is to convert a blighted vacant building on Curtis Bay's main street into a community owned center to advance environmental Justice and Zero Waste work prioritized by residents and workers.

In a previous demonstration, protester Mike McGuire was shot by an unknown paintball “gunman;” he suffered damage to his eye and had to spend the night in a hospital. At the second demonstration, the Baltimore City Police caught another paintball shooter, and no one was hit or harmed.

The Curtis Bay action is what some of us have been involved in lately. Special thanks to Bill Barry, Michael Cornell, Terry Fitzgerald, and Richard Ochs. We make a difference when we participate in demands for social or economic justice, peace, democracy, or environmental actions in our communities. You can, too!