Green Party endorses Occupy Inauguration; Greens will participate in protests on Jan. 20 and 21 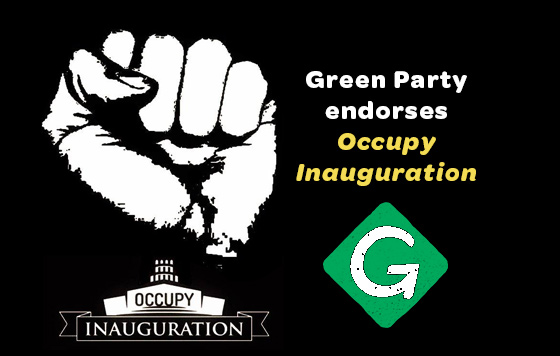 WASHINGTON, D.C. -- The Green Party of the United States has endorsed Occupy Inauguration, as Greens prepare to participate in events planned for Jan. 20 and Jan. 21.

Occupy Inauguration will feature a mass rally and protest in Washington, D.C. to coincide with President-elect Donald Trump's inauguration.

Organizers intended Occupy Inauguration to take place whether Mr. Trump or Hillary Clinton won the election: "We knew, no matter who was to be elected, Trump or Clinton, the voices of the 99% would be shut out. We are calling for unity to stand against the oligarchy and demand representation for the people."

Friday, Jan. 20 is Inauguration Day. Saturday, Jan. 21 is the seven-year anniversary of the Supreme Court's Citizens United ruling, which removed restrictions on certain political expenditures and broadcast electioneering by corporations.

"Donald Trump is stacking his administration with know-nothings who deny climate change, white supremacists who hardly bother to hide their racism, and appointees hostile to minimum wages, overtime, workplace safety laws, corporate regulation, environmental protections, Social Security, Medicare, and immigrants' rights. He has already betrayed working people who voted for him in the hope of an alternative to Wall Street politicians of both major parties," said Darryl! L.C. Moch, co-chair of the Green Party of the United States.

"In joining the Occupy Inauguration coalition, Greens are also protesting Democrats and moderate Republicans whose response to Mr. Trump's extremist agenda will be accommodation, compromise, and capitulation. The real opposition party during the next four years will be Greens, not Democrats," said Mr. Moch.

Occupy Inauguration's demands align with the Green Party's own platform and principles. They include an end to mass deportations of immigrants, refugees, and their families; support for Black Lives Matter's call for an end to institutional racism, police brutality, and the racist War on Drugs; honoring of First Nations treaties; a constitutional amendment abolishing "corporate rights"; Medicare for All; the Disability Integration Act; urgent action against climate change including a halt on fracking, new pipelines, and other fossil-fuel extraction projects; free college education and cancellation of student debt; far-reaching electoral reforms; break-up of "too big to fail" banks; an end to permanent war and the surveillance state; pardons for political prisoners and whistle-blowers; a federal $15/hour minimum wage; and scrapping of trade deals like the Trans-Pacific Partnership.

The list of demands also includes the Green New Deal, which has been promoted by 2016 Green presidential nominee Jill Stein, running mate Ajamu Baraka, and other Green candidates since 2010.