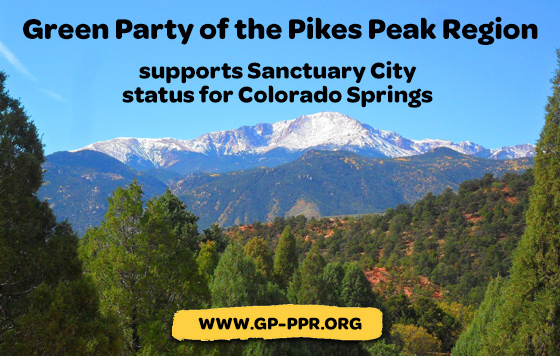 Colorado Springs, CO/USA, February 10, 2017 – The Green Party of the Pikes Peak Region has released a Sanctuary City proposal that aims to protect the most vulnerable members of our society by ensuring that no local resources are used to carry out racist and dehumanizing federal mandates targeting undocumented immigrants.

The text of the proposal is appended below and here: http://greenpapers.net/sanctuary-cities/.

The proposal would also build trust in Colorado Springs communities by making sure that all residents feel safe reporting a crime, calling the fire department, enrolling their children in school and accessing services that are available to them regardless of immigration status.

"We believe that we must act quickly and decisively to protect our undocumented friends, neighbors and family members from draconian policies that threaten to tear family members apart in exchange for a false sense of security," said Karyna Lemus, chair of the Green Party of the Pikes Peak Region. "The Green Party will not stand by silently and we plan on working tirelessly with like-minded individuals to ensure Sanctuary City is enacted in Colorado Springs."

The Case for Sanctuary Cities

I. The concept of sanctuary cities is rooted in the Sanctuary Movement of the 1980's where churches spearheaded efforts to provide refuge to Central Americans fleeing civil wars in their home countries. We seek to uphold this spirit and reaffirm immigrant and human rights in face of repressive immigration proposals that threaten to separate families and destabilize our diverse communities.

II. Immigrants' rights are human rights: In 1948, the United Nations General Assembly unanimously adopted the Universal Declaration of Human Rights (UDHR), which, for the first time, codified the basic human rights of all people. It contains 30 articles that delineate specific rights belonging to all human beings everywhere, such as civil and political rights as well as economic, social and cultural rights. Since the adoption of the UDHR, the United States has ratified several other human rights treaties, including the International Covenant on Civil and Political Rights, the Convention to End All Forms of Racial Discrimination, and the Convention Against Torture and Other Cruel, Inhuman or Degrading Treatment or Punishment. By ratifying these treaties, the United States has incurred binding international obligations to respect and ensure protection of the human rights recognized in these treaties. However, in spite of the guarantees afforded by the UDHR and these treaties, it is clear that persons attempting to enter the United States and immigrants already living in our country continue to face violations of their human rights. The Green Party of the Pikes Peak Region and associated organizations agree that current anti-immigrant rhetoric and repressive immigration policies being proposed exemplify the United States' failure to ensure fairness and dignity to immigrants. It is therefore imperative that the City of Colorado Springs respond by implementing Sanctuary City status, which would benefit our city in the following ways:

1. Sanctuary City status would promote trust and ensure residents know that they're safe accessing City services as City employees would not report Colorado Springs residents or their immigration status to federal immigration agents when they go to a public health clinic, enroll their children in school, report a crime, etc. All residents should feel safe when calling the police and fire departments during emergencies.

2. Sanctuary City status would promote equal rights for all citizens, regardless of their immigration status by preventing discrimination and racial profiling. It would also revitalize our commitment to the UDHR and other human rights treaties.

3. Sanctuary City status would facilitate community policing efforts so that members of the community, including immigrants, can safely work to prevent and solve crime.

4. Sanctuary City status would uphold the Tenth Amendment, which provides for the separation of federal and state powers. It also prevents the federal government from coercing state or local governments to use their resources to enforce a federal regulatory program, like immigration.

The proposed ordinance is as follows:

It is hereby affirmed that the City of Colorado Springs is a City of Refuge.

2. USE OF CITY FUNDS PROHIBITED.

No department, agency, commission, officer or employee of the City of Colorado Springs shall use any City funds or resources to assist in the enforcement of federal immigration law or to gather or disseminate information regarding the immigration status of individuals in the City of Colorado Springs unless such assistance is required by federal or State statute, regulation or court decision. The prohibition set forth in this Chapter shall include, but shall not be limited to:

(a) Assisting or cooperating, in one's official capacity, with any Immigration and Naturalization Service (INS) investigation, detention, or arrest procedures, public or clandestine, relating to alleged violations of the civil provisions of the federal immigration law.

(b) Assisting or cooperating, in one's official capacity, with any investigation, surveillance or gathering of information conducted by foreign governments, except for cooperation related to an alleged violation of City, State or federal criminal laws.

(d) Including on any application, questionnaire or interview form used in relation to benefits, services or opportunities provided by the City of Colorado Springs any question regarding immigration status other than those required by federal or State statute, regulation or court decision. Any such questions existing or being used by the City at the time this Chapter is adopted shall be deleted within sixty days of the adoption of this Chapter.

Nothing herein shall be construed or implemented so as to discourage any person, regardless of immigration status, from reporting criminal activity to law enforcement agencies.

The Human Relations Commission shall review the compliance of the City departments, agencies, commissions and employees with the mandates of this ordinance in particular instances in which there is question of noncompliance or when a complaint alleging noncompliance has been lodged.

In undertaking the adoption and enforcement of this Chapter, the City is assuming an undertaking only to promote the general welfare. This Chapter is not intended to create any new rights for breach of which the City is liable in money damages to any person who claims that such breach proximately caused injury. This section shall not be construed to limit or proscribe any other existing rights or remedies possessed by such person.