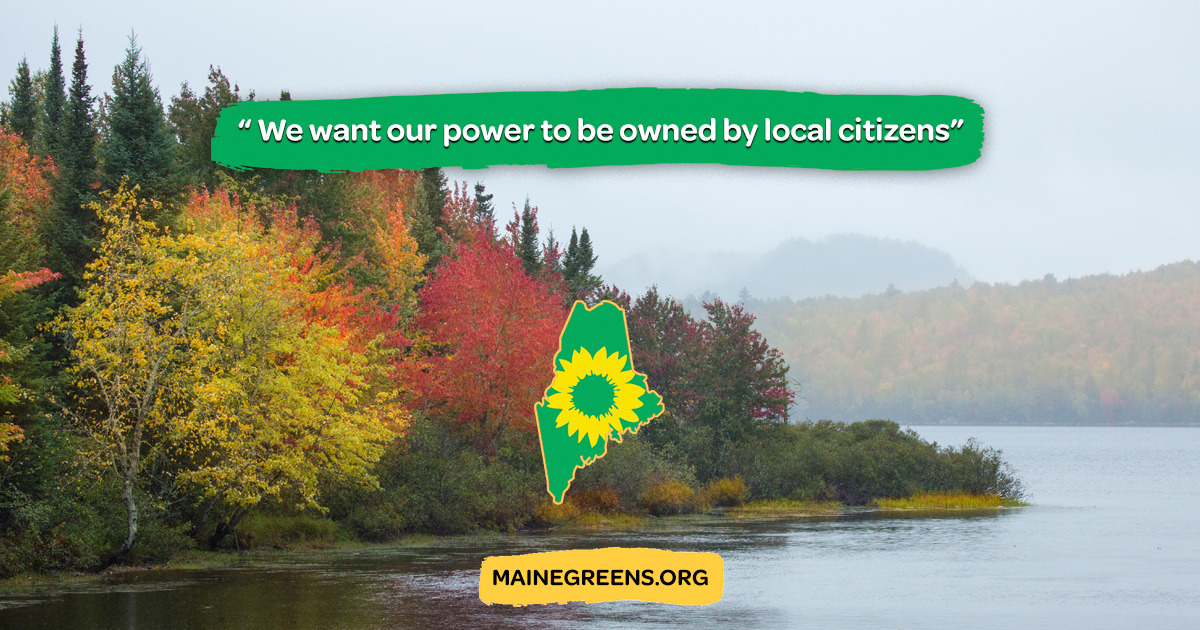 Augusta, ME -- The Green Independent Party has taken a position opposing a Central Maine Power (CMP) proposal to create a 145-mile transmission line corridor that would deliver electricity from Canada to Massachusetts.

Central Maine Power, which would distribute power provided by Hydro-Québec, has failed to provide evidence that the proposal would reduce climate-changing emissions and has admitted that it does not know what the sources of energy will be.

The Green Independent Party is an ecologically-focused political party that has been on Maine's ballot for more than 20 years and initially formed in 1984.

In addition to redistributing electricity from greenhouse gas-producing sources and adversely impacting the development of clean renewable energy, the corridor would damage hundreds of miles of Maine's natural environment and lead to the seizure of personal properties.

The states of New Hampshire and Vermont have both rejected proposals for a transmission line corridor.

"CMP is not listening to the will of Maine's people, towns and businesses," said Niomi Larrivee, co-chair of the party. "CMP is trying to buy us out. We are on the losing end. Property rights would be lost via eminent domain. This will impact our tourist trade: destroying valuable trusts, sanctuaries, ancient Native American treasures, parks and our personally owned land."

John Rensenbrink, a co-founder and advisor of the party, said the proposal is an example of a corporation failing to work for the public good. "The top leadership of Central Maine Power has consistently put their own money and control ahead of what is good for the company as a whole and well ahead of what is good for the people of Maine," Rensenbrink said.

Kimberly Pfusch, chair of the Lewiston Green Independent committee, said, "Residents are asking why a foreign owned company can do this. We want our power to be owned by local citizens."

The proposed corridor would cut through Lewiston and more than 30 other Maine towns and cities.

As well as opposing the corridor, the party endorses "An Act to Create the Maine Power Delivery Authority".

Jon Olsen, senior co-chair of the party, said the bill would benefit Maine because revenue would remain in Maine instead of being "siphoned off to Spain for the benefit of CMP's parent company."

Olsen said the newly-created power delivery authority would be "accountable strictly and only to the people of Maine," and would be created without an additional tax burden on ratepayers if CMP were purchased over time with a bond.

"The new entity, which can be run nearly non-profit if desired, would be far more willing to invest in alternative, sustainable energy not dependent on foreign-sourced fossil fuel products, provided that this entity has the authority to deliver and produce electricity for the use of Mainers," Olsen added. "This means more good jobs."