Next GreenStream broadcast: Interview with Julie Bañuelos, Green candidate for Denver School Board, on Sept. 20 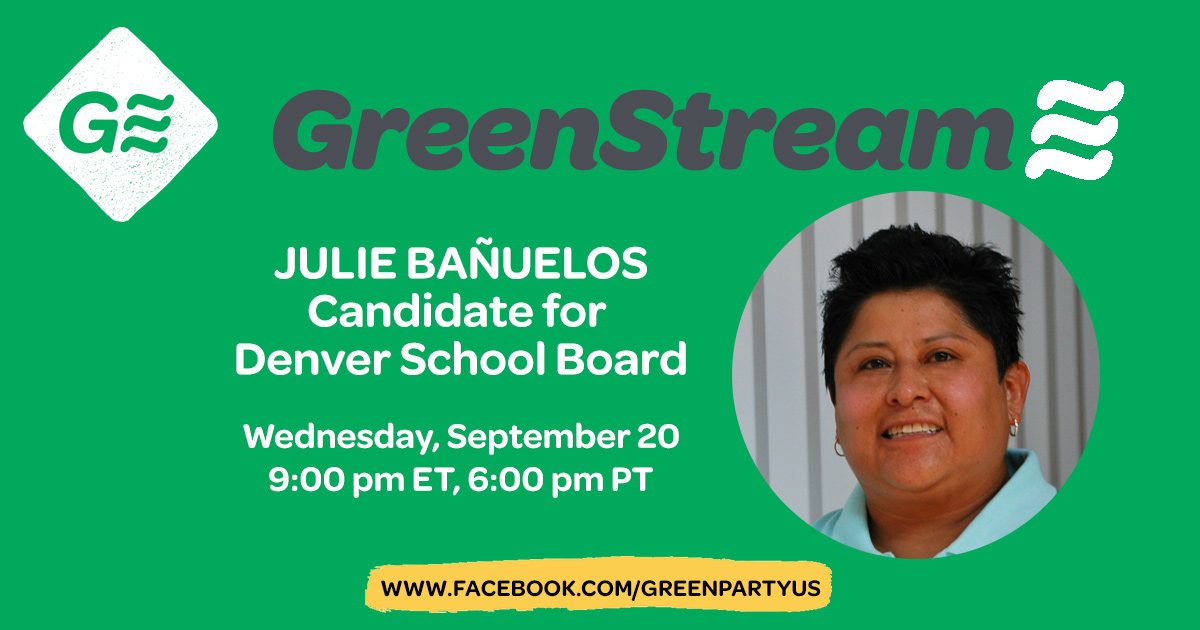 WASHINGTON, D.C. -- The next broadcast of GreenStream, the Green Party's livestream show, will feature an interview with Julie Bañuelos, Green candidate for the Denver, Colorado, Board of Education.

Andrea Mérida Cuéllar will interview Ms. Bañuelos. Technical producer for the show will be Craig Seeman.

Julie Bañuelos is a former Denver teacher and union leader who recently left the classroom. She is the daughter of immigrants and farmworkers, who later went on to achieve higher education and instilled in her a dedication to hard work. She has a degree in Economics from Grinnell College in Iowa, and after a lucrative career in the financial services, she returned to her elementary school, near the public housing projects where she grew up, and embarked on a new career as a teacher. Ms. Bañuelos currently works for Catholic Charities providing direct care to Denver's most vulnerable families, and she serves as the co-chair of the Denver Green Party and is a co-founder of the Latinx Caucus and of the Lavender Caucus of the Green Party of Colorado.

Now on her second term as a national co-chair of the Green Party of the United States, Andrea Mérida Cuéllar served as Denver's first elected Green on the Denver board of education. During her tenure she was the prime driver of a landmark civil rights ruling regarding English learners in the Denver Public Schools. As a result, now even charter school students in Denver must be provided with support to learn English in public schools, where previously charters were allowed to cherry-pick from among students by English proficiency level. As a daughter of Guatemalan immigrants, Ms. Mérida Cuéllar is committed to intersectionality and social justice.

In the August 23 broadcast of GreenStream, Theo Williams of the New Jersey Green Party interviewed Ursula Rozum, Campaign for New York Health upstate coordinator and member of the Green Party of New York State, on the movement to enact a Single-Payer national health care program.