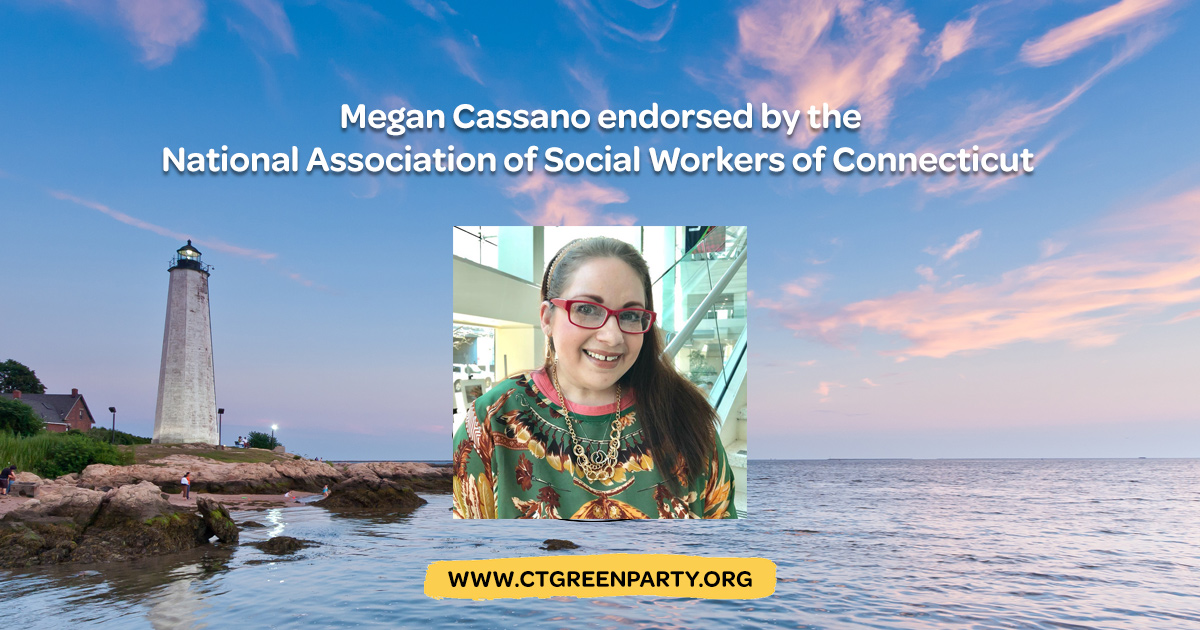 Greenwich, CT – September 28, 2018 – In the midst of the opioid crisis and the demand for proper mental health care vastly outweighing the supply on state and nationwide levels, Green Party State Senate District 36 candidate, Megan Cassano examines these issues, among others, in her proactive, solutions-based platform, which earned her the endorsement from the National Association of Social Workers of Connecticut (CT PACE/Political Action Committee of NASW).

She earned her Master's degree from Fordham University in 2003 (also obtaining a Specialization in Substance Abuse). She has been licensed as a Clinical Social Worker in the State of Connecticut since 2006 and has received advanced certifications in Trauma.

NASW is the largest professional association of social workers in the state, representing over 2500 members. In the endorsement letter, dated September 18, Executive Director, Stephen A. Wanczyk-Karp wrote that their legislative priorities include ensuring affordable health care and living wages, social justice, immigration protection, funding for social services, as well as establishing and implementing title protection for the social work profession.

Cassano has been employed in both clinical and administrative capacities by organizations such as Catholic Charities, the Salvation Army, Stamford CARES, the City of Stamford, and Rushford Crisis Center, in the areas of Trauma, co-occurring illnesses, special populations, crisis work, CSSD/DOC, HIV/AIDS, Needle Exchange, among others. She served as an Adjunct Professor at both Concordia College and University of Bridgeport for approximately ten years.

The Fairfield County Chapter of the Green Party of Connecticut thanks the CT PACE/Political Action Committee of NASW for their support.

Voters can meet Cassano and other Greens seeking state-level office on Saturday, September 29, 2018 in Greenwich at the Last Taste of Summer Craft Beer Festival, running 1-4:30 pm in Roger Sherman Baldwin Park. Candidates include Ed Heflin, running for Comptroller, Peter Goselin, Attorney General, Mike DeRosa, Secretary of State and Jeff Russell, U.S. Senate. The GPCT candidates will be talking with attendees at the Green Party information table and on the park grounds throughout the festival; find out more at http://www.livegreenct.org/.

About the Green Party of Connecticut

A unity of local Green Party chapters, the GPCT (www.ctgreenparty.org) is committed to grassroots democracy, social justice, non-violence and ecological wisdom. These are the Four Pillars of all Green parties worldwide and are the first four principles of the Ten Key Values of the Green Party (including decentralization, community-based economics, feminism and gender equity, respect for diversity, personal and global responsibility, future focus and sustainability). We do not accept contributions from corporate PACs.