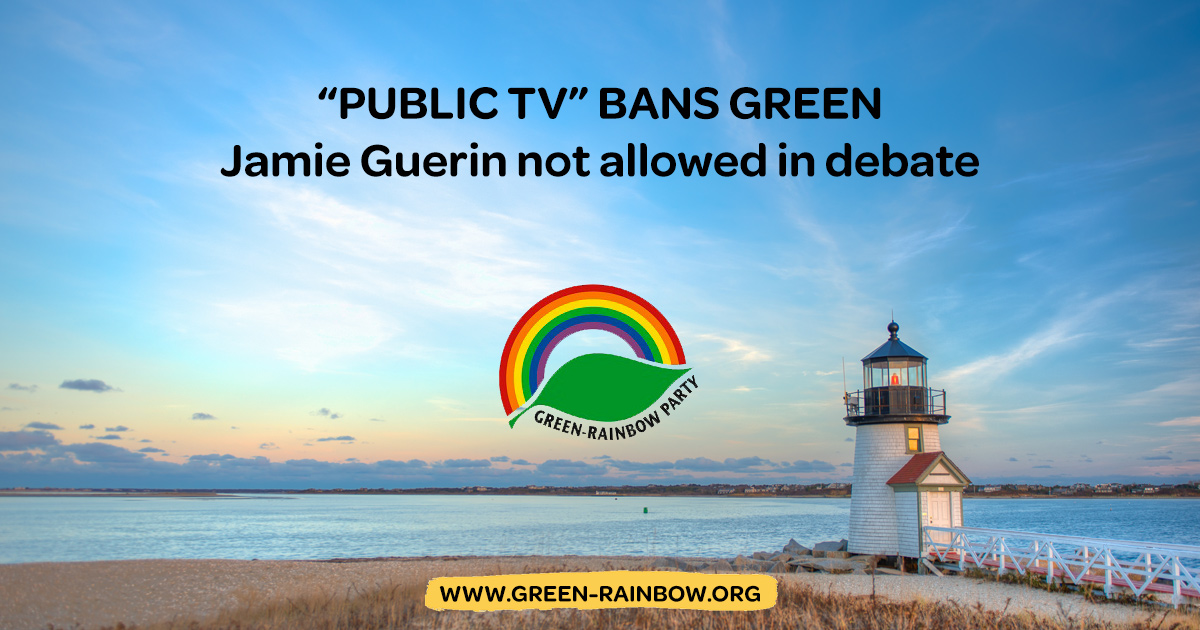 October 10, 2018 – Today’s State Treasurer debate will be missing a key voice from a balloted candidate, that of Jamie Guerin, a long-time activist and Green-Rainbow Party member. Her "Why not invest in ourselves?" platform offers a concrete plan for reducing interest expenses on infrastructure projects, creating a socially just state investment program; a state bank, and eliminating corporate and Wall Street influence in Massachusetts politics. In fact, she herself does not accept donations from lobbyists or corporations that use them.

Ironically, that is part of the reason that she was not included.  WGBH’s Erin Callanan wrote “Given time constraints, we needed to limit the number of participants to ensure a substantive, informative event that would benefit our viewers. The candidates were selected based upon previously-used criteria, which included money raised, total number of donations and established campaign infrastructure.”

This is particularly disappointing when you consider the fact that WGBH is in part publically funded by taxpayer money.

By characterizing the Massachusetts State Treasurer election as a two-party race, WGBH's Greater Boston is perpetuating the media, institutional and political biases that keep American politics so red and blue, and so very divided.  Only giving voice to candidates with money prevents grassroots movements from becoming ground swells.

"I am running for State Treasurer to give the 99% a voice in Massachusetts politics. We need to end the corporate stranglehold over the state and break free of the duopoly that is beholden to big money, the fossil fuel industry and the war machine,” said Guerin. "I hope people will join me in protesting WGBH and demand programming that truly reflects the wide range of ideas, candidates and solutions available for ending income inequality, improving education and creating a government that is accountable to the people, not the 1%.”

To understand the full implications of the WBGH debate stance, consider the comments from Daniel Fishman, the Libertarian Party candidate for State Auditor:

“The Libertarian Party of Massachusetts and the Green-Rainbow Party of Massachusetts  might stand at odds politically, but the men and women of our communities are united by a goal – to challenge the status quo.  Jamie is blatantly absent [from this debate]. We demand that the other Treasurer candidates refuse to participate and we encourage other Boston media channels to step in and offer their platforms for the three candidates – to conduct a fair and informative program for the benefit of ALL voters in the Commonwealth, featuring ALL candidates who seek their consideration.”

The Green-Rainbow Party of Massachusetts seeks a world where money does not influence politics or the media that covers it. Join us in boycotting WGBH debates until they can have fair and equal representation for all balloted candidates.

"In tonight's MA treasurer's debate, WGBH plans to exclude the only voice that matters; Green-Rainbow candidate Jamie Guerin's. Hers is the only important voice because the Republicans left reality and the Democrats left integrity, and only Green-Rainbow plans will really stop the climate crisis, and employ all. The Republicans left reality by denying the climate crisis; The Democrats left integrity by accomplishing nothing in two years with Federal House, Senate and Obama's Presidency in Democratic hands, and by corruptly attacking Bernie Sanders' presidential candidacy before the primaries. Massachusetts Democrats are no better: While controlling MA House and Senate, they've excluded themselves from MA open meeting law, among other betrayals."