Howie Hawkins and Gloria Mattera will speak about their Green Party campaign for Gov. and Lt. Gov 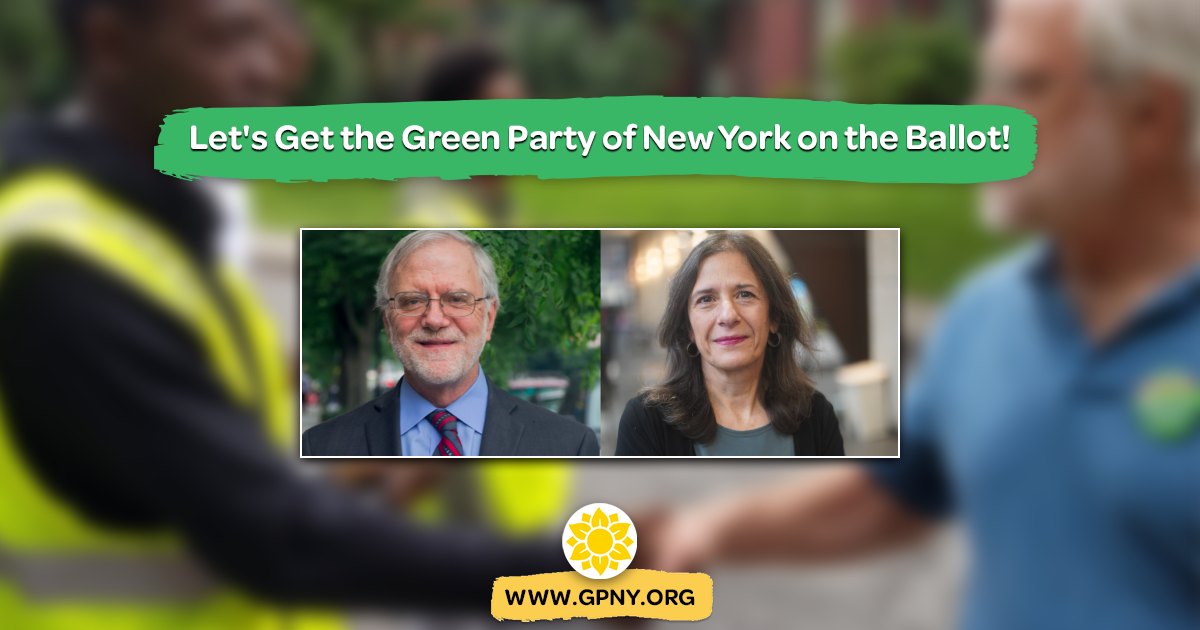 Howie Hawkins and Gloria Mattera will speak about their campaign and take questions.

As the Green Party's gubernatorial ticket in 2010, Howie Hawkins and Gloria Mattera were the first candidates in the US to campaign for a Green New Deal. That campaign received enough votes to secure a ballot line for the party in New York.

Now in 2022, Hawkins and Mattera have teamed up again to restore the Green Party's ballot under the new ballot access law that requires three times more signatures and votes to secure a ballot line.

On Tuesday, April 19, the Green Party started gathering the 45,000 good signatures they need to submit in 42 days on May 31 to get Hawkins and Mattera on 2022 ballots.

The higher ballot access requirements were enacted at the urging of former Gov. Andrew Cuomo during the Covid lockdown in April 2020 in a bill attached to the state budget package. The new law requires parties to qualify every two years in presidential as well as gubernatorial years instead of the previous standard of every four years in gubernatorial races. The Green Party and three other parties that did not run a major party presidential candidate on their ballot line lost ballot access in the 2020 election.

"We call it the Ballot Access Exclusion Law. It's a party suppression law," said Howie Hawkins. He said that New York has the most difficult ballot access petition in the nation and among the world's electoral systems. The Greens have proposed a bill that would restore the pre-2020 ballot access standards.

"We are in a democracy crisis," Hawkins said, noting that Republicans are passing bills to suppress voting rights and honest elections in many states, Democrats are failing to pre-empt those state laws by passing federal voting rights and election protection laws, and that Democrats in New York passed a party suppression law.

"Our campaign is going to attack not just ballot access exclusion, but also the exclusionary nature of single-member-district, winner-take-all elections that give no representation to political minorities. So in addition to a reasonable ballot access, we are campaigning for an inclusive multi-party democracy based on ranked-choice voting for statewide offices and proportional representation in the state legislature," Hawkins said.

The Green ticket is renewing the party's longstanding call for a Green New Deal to address the climate crisis and economic insecurity. They propose a stronger state climate action program that would achieve 100% clean energy and zero emissions within 10 years along with an economic bill of rights including universal single payer health care, a guaranteed minimum income, a $20 minimum wage, affordable housing, and tuition-free public education from child care and pre-K through college and technical schools.

"We call it an Ecosocialist Green New Deal to distinguish from the watered-down Green New Deal some progressive Democrats have proposed. They took the Green Party's slogan and diluted its content, including eliminating our ban on new fossil fuel infrastructure and extending the deadline for zero emissions from 2030 to 2050," Mattera said.

Mattera explained that Democrats' Green New Deal proposals replaced the Greens' "ecosocialist" public sector program of public enterprise and democratic planning in order to coordinate a rapid decarbonization of the economy and replaced it with corporate welfare programs of tax breaks, subsides, and loan guarantees for the energy and utility companies.

"The Democrat's weakened Green New Deal keeps the corporations that that got us into the climate crisis in charge. Economic incentives to lots of corporations making their own separate business decisions are not going to result in a coordinated plan of energy transformation. Our ecosocialist approach features public enterprises in key sectors like power, transportation, and manufacturing that directly employ people to make the goods and services we need for a speedy conversion to clean energy and zero emissions," Mattera said.

Mattera, who has been board member of the NY Metro Chapter of the Physicians for a National Health Program for many years, said that a top priority for the Green Party is passage of the proposed New York Health Act, which would provide publicly-funded health insurance for all New York residents.

"The Democrats promised New Yorkers that they would pass the New York Health Act when they got a majority in both chambers of the state legislature and the governorship. They got that in 2018, four years ago. But since then, the bill, which had passed the Assembly many times since 1992, has not even got out of committee in either chamber. Democrats are taking their health care voters for granted. Our campaign will make sure they can't," said Mattera.

Hawkins said that another issue the Democrats are failing address is poverty, particularly in upstate cities. Hawkins' home town of Syracuse ranks highest in the nation in child poverty and family poverty, with Rochester and Buffalo close behind.

"The recently adopted state budget had no new anti-poverty initiatives. It rejected the Housing Access Voucher Program and replenishment of the Excluded Workers Fund. We are calling for a guaranteed minimum income above poverty built into the progressive tax structure in order to end poverty. If your income is below the poverty line, you will receive income monthly to bring you above poverty," Hawkins said.

Hawkins pointed out that in his last book in 1967, Where Do We Go from Here: Chaos or Community?, Martin Luther King, Jr. wrote, "I am now convinced that the simplest approach will prove to be the most effective—the solution to poverty is to abolish it directly by a now widely discussed measure: the guaranteed income." The guaranteed income became a demand of the Economic Bill of Rights called for by the Poor People's Campaign that Martin Luther King, Jr. spearheaded in 1968.

"It is way past time to end poverty directly with a guaranteed minimum income," Hawkins said.