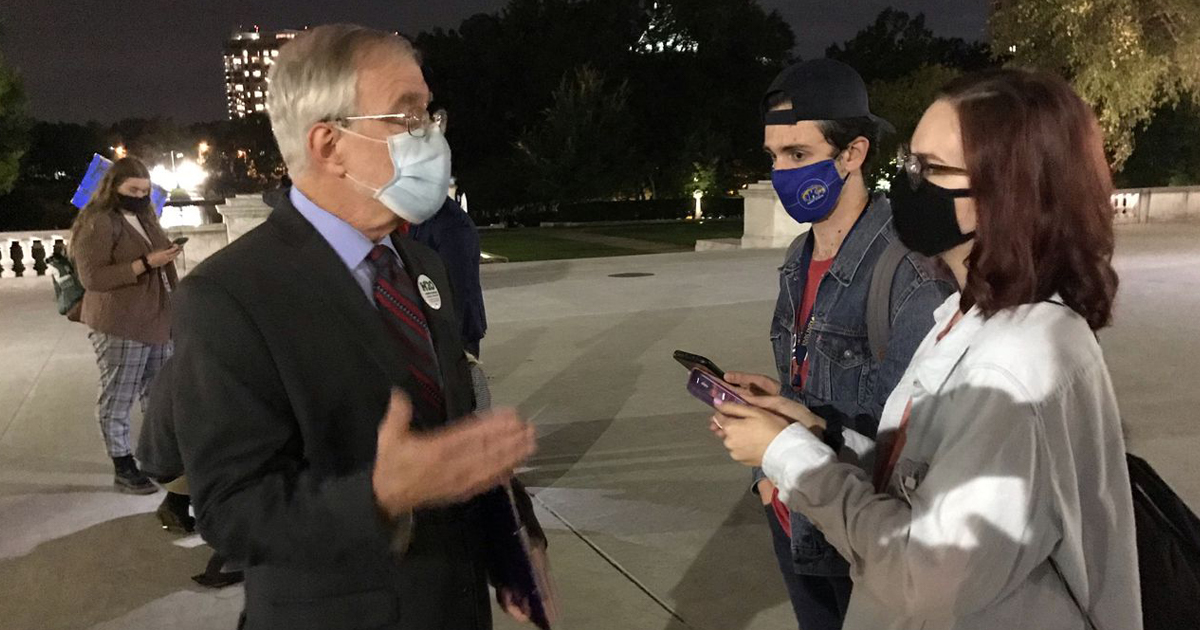 CLEVELAND — Green Party presidential nominee Howie Hawkins was in Cleveland for Tuesday's presidential debate – not to participate, but to criticize the event as a "fraud" and draw attention to his stances on police reform and other issues.

Speaking with cleveland.com outside the Cleveland Museum of Art, Hawkins noted that the Commission on Presidential Debates, which has organized major-party presidential debates since 1988, was organized by Republicans and Democrats.

"It's set up to exclude the rest of us," Hawkins said, noting he made the ballot in 30 states -- including Ohio, as an independent -- and Libertarian presidential nominee Jo Jorgensen is on the ballot in all 50 states.

"I think a four-way debate would be a lot more interesting for the American people," he said, adding later, "We have constructive things that ought to be heard, and they're not going to be heard in this debate."

Speaking about police reform – a hot-button issue that's become even hotter since the death of Minneapolis resident George Floyd in May -- Hawkins said "use-of-force" reforms aren't enough. Instead, he said, he favors having local police departments run by commissioners elected or even selected by lot, like juries.

Such a step, he said, "Would get the police unions and the real estate industry -- everybody that set up the police the way they are -- out of the picture...They would clear the forces of racists and sadists, oversee policies and budgets, and investigate and discipline misconduct."

Hawkins noted that the police department in his hometown of Syracuse, New York, has been operating under a federal consent decree for 40 years -- eight times longer than Cleveland's consent decree -- but it hasn't stopped police brutality.

Hawkins said he agreed with Newark Mayor Ras Baraka's statement that seeking to "abolish the police" is a "bourgeois liberal" idea that doesn't consider the need for someone to respond to acts of violence and abuse.

"I'm not for abolishing the police," Hawkins said. "I want good police that don't harass us but solve serious crimes."

Hawkins said instead of defunding the police, the federal government should create a domestic Marshall Plan that would help rebuild cities the same way the U.S. offered massive aid to rebuild Europe after World War II.

When Hawkins was asked what he would say to people who might think they would be throwing their vote away by voting for him this year, he replied that Democratic nominee Joe Biden opposes liberal proposals such as the Green New Deal.

"Why waste your vote on somebody who doesn't support what you support?" Hawkins asked.

However, Hawkins added, he knows Biden and Trump are running neck-and-neck in Ohio polls, so he "wouldn't hold it against anybody" in the Buckeye State who voted for Biden.

"But I think nationwide -- I mean if Biden loses, it's not going to be my fault," Hawkins said. "It's going be his damn fault."

Jorgensen, meanwhile, was also in Cleveland on Tuesday night, where she participated in a Facebook Live discussion.