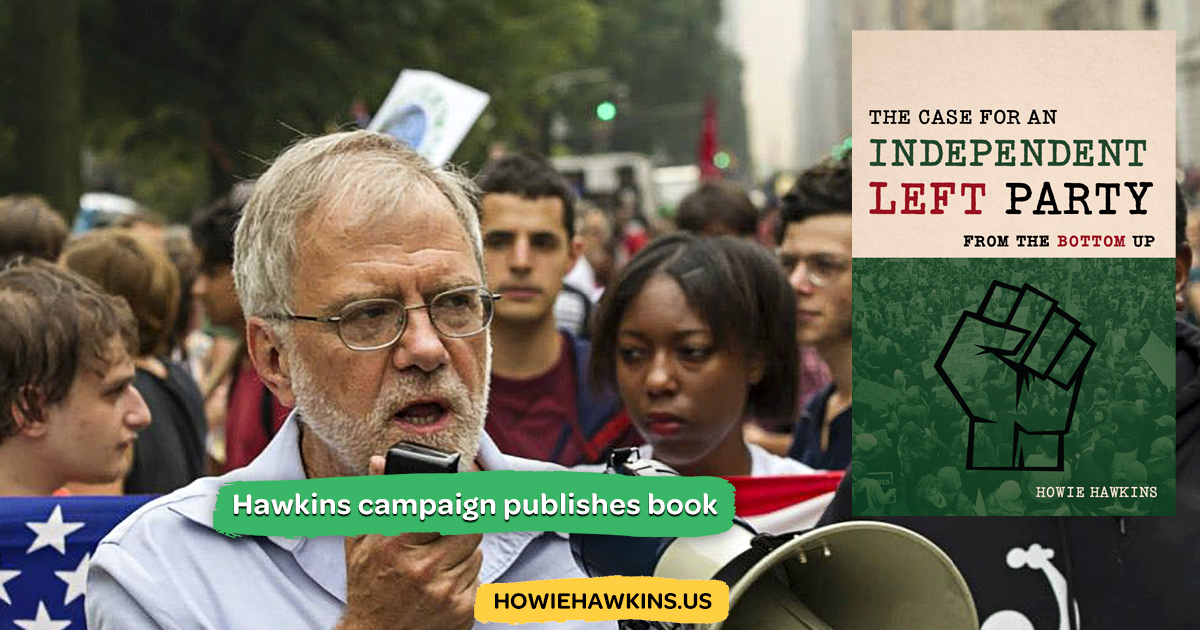 The Howie Hawkins Green presidential campaign has published an ebook: The Case for an Independent Left Party: From the Bottom Up. With former Vice President Joe Biden now the presumptive nominee of the Democratic Party, many supporters of Senator Bernie Sanders are looking for another progressive option.

This has resulted in a #NeverBiden movement developing and more people leaving the Democratic Party. Since 2010 a majority of voters in the United States have wanted a third party, according to Gallup. People understand the two parties represent millionaires and billionaires, as they are funded by big business interests. They want a party for the people.

This groundbreaking book by Howie Hawkins, a co-founder of the Green Party and longtime socialist, makes the case for an independent left party.

The United States is the only major industrial country without a major working-class party of the left. Insurgent progressive third parties were a major force in American politics and set the reform agenda from the 1830s until the 1930s. Hawkins argues the failure to consolidate a working-class party is not only due to often-cited electoral barriers, such as onerous ballot access laws and the absence of proportional representation of parties.

Rather, the failure to build a viable left party is also due to not building a party from the ground up that is organized as a well-funded, dues-paying membership party, with local branches where members have a voice and power in a grassroots-democratic party structure.

Hawkins says the party can be built from the bottom up by organizing the working-class majority to speak and act independently for itself in political education, social movements, and election campaigns.

The book comes at a time of unique opportunities for building a left party that puts the interests of the people first. Hawkins in 2010 was the first US candidate to run on the Green New Deal and is now running for president, calling for an ecosocialist Green New Deal. The current economic collapse and the failure to respond to COVID-19 are highlighting flaws in the US healthcare system and economy. Hawkins has been addressing these issues, putting forward the Hawkins Healthcare Plan that includes improved Medicare for All as a community-controlled national health service and advocates for economic democracy and increased worker rights.

The book is free with donations to the Hawkins campaign and available at: https://howiehawkins.us/donate-to-get-a-copy-of-the-case-for-an-independent-left-party/.