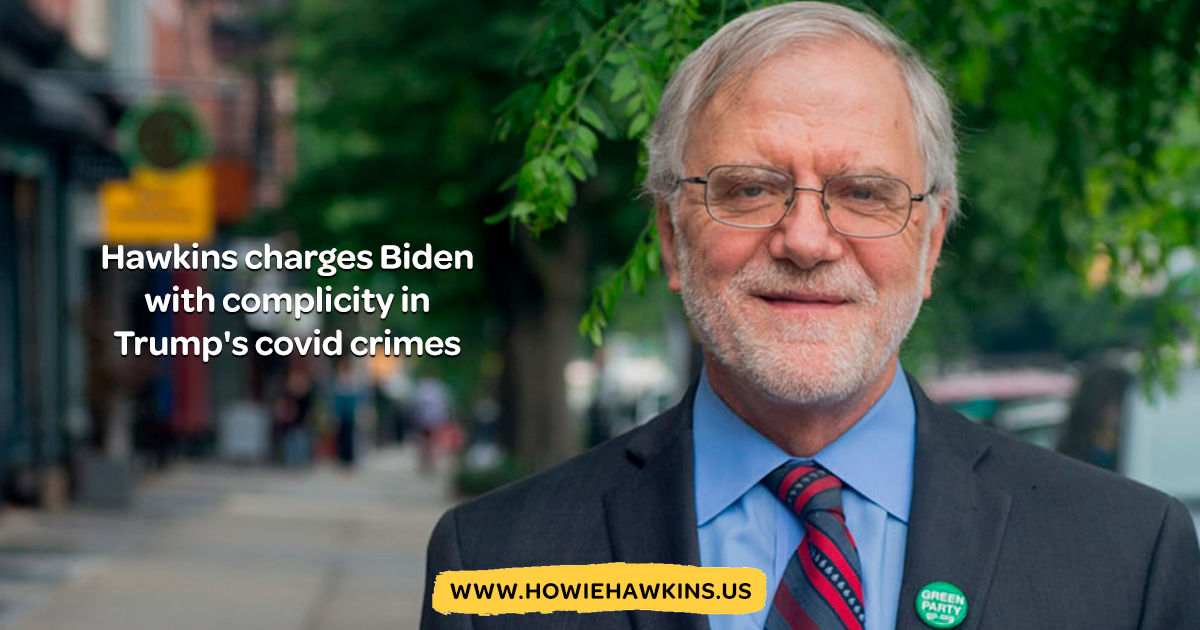 "The US has 4% of the world's people, but 25% of its COVID-19 cases and deaths. Trump gave up. He's a loser. He should be charged with negligent mass murder. But Biden's silence makes him an accomplice," Hawkins said.

"Biden lives within commuter distance of the White House press corps. As the presumptive Democratic nominee, he could convene them for socially-distanced news conference broadcast on cable news like New York Governor Cuomo did early in the pandemic. He could have provided leadership, pointed the country in the right direction, mobilized public opinion, and pounded away at Trump to build public pressure for what the country desperately needs right now, which is to use the Defense Production Act to mount a vigorous federal test, contact trace, and quarantine program in order to suppress community spread of the virus until it is safe to go back to work and school," Hawkins said.

"Instead," Hawkins continued, "Biden is content to let Trump's public stupidity sink his re-election prospects. Biden's silence in this emergency when he has the power to do something about it makes him complicit in the deaths and economic destruction we are suffering."

Hawkins has issued eight statements since March 3 on what the federal response to the COVID-19 public health and economic emergencies should be.

Hawkins said Biden could also use news conferences to protect the postal service, defend mail-in ballots, and call for a Main Street COVID relief package. "He says the country needs new leadership, but he is not showing it," Hawkins said.

"Trump just announced a fantasy unemployment insurance supplement. It is pure pandering, as fraudulent as Trump University. The FEMA funds designated for this reduced supplement will run out in a month. But Biden can't bring himself to criticize Trump's fraud, let alone make statement of support for continuing the existing $600 a week supplement. It would be so easy for Biden. But he is AWOL," Hawkins said.

Hawkins said Biden's absence from the public debate is deepening the health and economic crises he will inherit if he is elected. An influential epidemiological model predicts 300,000 deaths by December. Up to 43% of renters, 40 million people, are at risk of eviction. 19.3% of the labor force, 32.4 million workers, are unemployed or underemployed. 27 million people have lost or are at risk of losing their health insurance.

"My socialist solutions to pressing problems are way to the left of Biden on everything from health care, climate, and economics to foreign and military policy," Hawkins said. "But test, trace, and isolate, a COVID relief package, defending the post office and mail-in ballots – these are popular and non-controversial causes. I am dumbfounded—and infuriated—that Biden seems to think being the Democratic nominee is a no show job."