Howie Hawkins Is Running for Governor to "Demand More" 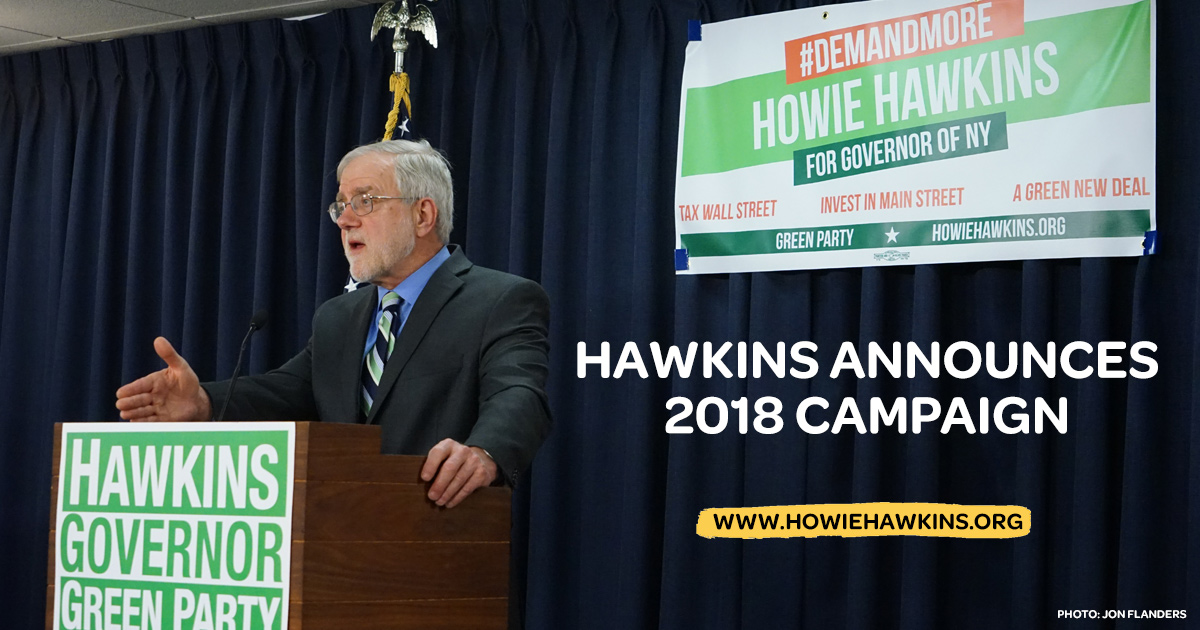 April 12, 2018 – Howie Hawkins of Syracuse announced today that he is running for Governor to demand more progressive reforms and system change. Hawkins finished 3rd in the 2014 Gubernatorial race. His 184,419 votes moved the Green Party up to the 4th line among ballot qualified parties.

Hawkins will campaign as an eco-socialist. "We are demanding more than piecemeal reforms. We are demanding system change. Capitalism's blind, ceaseless growth is devouring the environment. As long as workers are bound to a fixed wage and capitalists take the remaining value that labor creates as profit, the rich get richer and the rest of us struggle to make ends meet. We need more social ownership and democratic planning to provide a decent standard of living for all that is ecologically sustainable," Hawkins said.

Hawkins said it was time to "clean up the culture of corruption in Albany. Cuomo sells his office to the highest bidder, relentlessly extracting massive donations from the real estate industry, Wall Street, lawyers, and insurance firms. We need to replace pay-to-play with full public campaign financing."

While the Green Party has always opposed the construction of new fossil fuel projects such as the CPV power plant in Orange County, Hawkins said that the recent corruption conviction of Cuomo's former top aide required the state to rescind the permit for the plant.

"Third terms are normally unproductive for Governors, as their ideas have already been tried and their most talented staff members have long since departed. This is especially true with Cuomo and his unusually high staff turnover rate. His performance in this year's budget was particularly weak, with the Senate Republicans blocking most of his limited progressive agenda. It is clear his prime interest is running for President," Hawkins noted.

Hawkins said his 5% of the vote in 2014 has forced Cuomo to compete for progressive voters by adopting a number of Green demands, including the ban of fracking, the $15 minimum wage, paid family leave, and tuition-free public college.

"The historic role of third parties has been to force issues neglected by the major parties into public debate - issues like the abolition of slavery, women's suffrage, the 8-hour day, Social Security, and ending segregation. The Green Party has increasingly been playing this role," said Hawkins.

The Green Party's 1998 ticket of drug policy reformers Al Lewis for Governor and Dr. Alice Green for Lt. Governor helped to launch the movement to end the Rockefeller Drug Laws. Jason West and Rebecca Rotzler, the Green mayor and deputy mayor of the village of New Paltz, performed the first same-sex marriages in New York in 2004, instigating the movement for marriage equality that is now New York law.

In 2010, Hawkins brought the demand for a ban of fracking from Greens in the Southern Tier, including Green town board members, into the gubernatorial campaign. The fracking ban demand convinced the many environmentalists to support a ban rather than their positions at that time of promoting fracked gas as the "bridge fuel" to renewable energy or calling for a moratorium while fracking was studied. After Hawkins ran on the ban again in 2018, Cuomo adopted the ban two months after the election.

Hawkins added that his campaign will help Greens win elections, not just win reforms. "By retaining the ballot line, we can elect more Greens to local office. Winning local elections is the foundation for electing state and congressional Greens in the future. We need to elect Greens because even when the major parties adopt our reforms in name, they too often water them down," Hawkins said.

As examples, Hawkins said that Cuomo's implementation of $15 minimum wage is too slow and incomplete upstate, while his Excelsior Scholarship Program falls far short of universal tuition-free public higher education.

Hawkins, a recently retired Teamster, will ask for the Green Party nomination at its state convention in Albany on May 19. The Green Party is committed to ecology, grassroots democracy, non-violence, and social and economic justice.