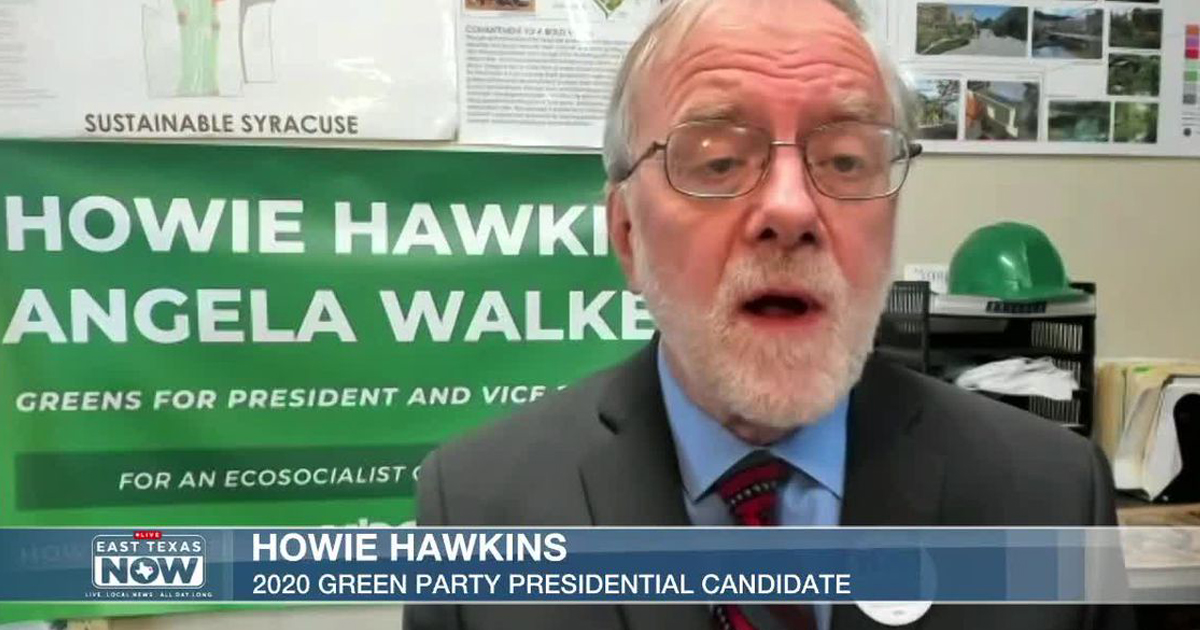 TYLER, Tx (KLTV) – Howie Hawkins, the presidential candidate for the Green Party, spoke about the response to COVID-19, the United States' economy, how the party would pay for its agenda, health care, job creation, and other topics in a wide-ranging ETN interview Tuesday. Hawkins spoke to East Texas Now anchor Kayla Lyons Tuesday afternoon.

A recent ruling by the Texas Supreme Court paved the way for the Green Party's candidates to be on the Lone Star State's ballot for the Nov. 3 election.

Early on in the interview, Lyons talked about how President Donald Trump has been aggressive about re-opening the nations' economy while Joe Biden, the Democratic presidential candidate, has expressed reluctance about re-opening the economy too quickly and asked Hawkins how he would have handled the COVID-19 pandemic.

"President Trump has been running around like the Typhoid Mary of COVID," Hawkins said. "Now, the chickens have come home to roost, and he got his own people sick."

Hawkins said Biden missed his chance to make a definitive statement about COVID-19 at the recent presidential debate.

The Green Party presidential candidate said he would have handled the pandemic differently by scaling up testing faster, doing more detailed contact tracing, and quarantining everyone who has been infected with the virus or who has been exposed to it.

Hawkins said that the COVID-19 virus is "raging" through the United States and that the country has been unable to suppress the virus like most of the other organized countries in the world like the Western Pacific Rim, much of Europe, and parts of Africa and Asia have.

The presidential candidate also pointed out the high unemployment rate and the fact that people living in rental properties or mortgaged homes are being evicted because they can't make their payments. Hawkins said the government should be protecting those people.

Hawkins said if he is elected, the Green Party would focus on creating public investment in transforming the U.S. economy to 100 percent clean energy and zero to negative carbon emissions in the next 10 years.

"That will put people back to work caring for people and the planet," Hawkins said. "It would create 38 million jobs."

Trump and Biden want to give tax cuts and subsidies to the rich with the assumption that the money will trickle down to the middle and lower classes, Hawkins said. He added that instead, the government needs to directly invest in the American people and bail them out as it did with the banks a few years ago.

"If the revenue is good, it will cover the cost," Hawkins said.

They would focus on public enterprise planning improvements for the energy and transportation sectors, and revue would come from fees for electricity, public housing rent, mass transit fares, etc., Hawkins said.

Hawkins said the Green Party's Economic Bill of Rights would also ensure healthcare for everyone in the form of Medicare or Medicaid, paid public education from Pre-K and childcare on up to college or secondary school.

The measure would also increase public housing construction so that everyone has affordable housing options and increase Social Security benefits, so senior citizens don't have to work because Social Security doesn't pay them enough to survive.

The Green Party has said that it would fund these measures with increased taxes on income, wealth, and estates and increasing taxes on pollution-causing resource extraction.