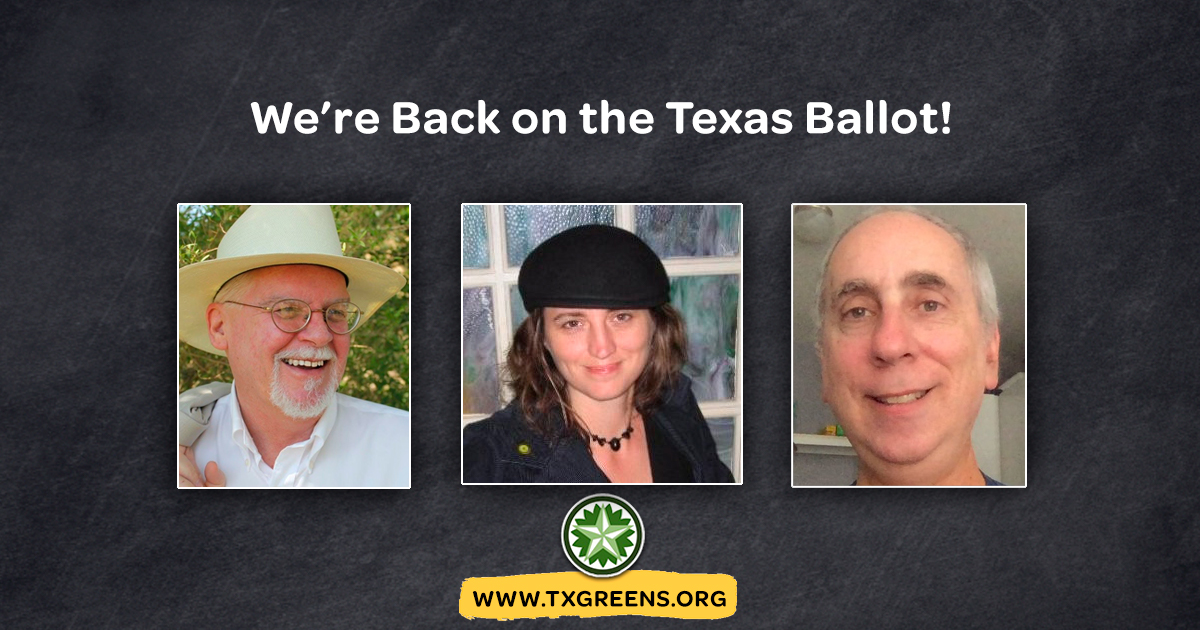 HOUSTON – August was a dramatic month for the Green Party of Texas (GPTX). We were forced to defend our candidates and Green voter choice in Texas from an overwhelming & last minute onslaught of Democrat litigation. All over the country, Democrat interests at every level have made every attempt to force Greens from the ballot, both in the Presidential/VP and down-ticket races. The good news though is that...

We won! In a surprise turn of events, the Republicans tried to copy the Democrat tactics against the Libertarians, and in the resulting legal actions, the Texas Supreme Court issued a Writ of Mandamus restoring our three targeted Green candidates to the ballot! So David Collins for US Senate, katija gruene for TX Railroad Commission, and Tom Wakely for US Rep 21 will indeed appear on the November general election ballot, giving us opportunity to retain ballot access into future election cycles.

GPTX is very grateful to all the volunteers who scrambled to put together our legal responses. It was truly a team effort and a galvanizing experience. Can you contribute to help GPTX stay in the fight?

Between now and the general election, GPTX will be running a banner display campaign as well as a social media ad campaign. We could really use volunteer support for both of these efforts to help make Texas voters aware of Green candidates on the ballot in 2020. If we could get an influx of donations, we could increase these efforts beyond the initial seed money the SEC has allocated to start!

After the 2020 election, GPTX will be focused on recruiting candidates for future cycles and improving our operations so that we can be stronger in the future. Volunteers can encourage potential candidates to consider the Green ballot line, where they may have a more direct path to the general election. Help us develop our party network and local operations by becoming active with GPTX. Help raise funds & donate to increase and improve our efforts.

Greens are not backing down. We are in this fight for the long haul, laying down the track to make change possible. People, Planet, & Peace over Profit!

To whom it may concern,

Pursuant to an opinion issued by the 3rd Court of Appeals yesterday, August 19, the Green Party of Texas is compelled to inform you that our party's nominees, David Collins, Tom Wakely, and katija gruene, are judged ineligible and must not be certified or appear on the 2020 General Election ballot. This communication is in compliance with that directive.

GPTX has always been forthright with the SOS, which certainly knows which candidates paid fees and which did not, and with the public, in the posting of candidate information on our website. We feel that applying HB2504 to only these candidates, while certifying other candidates that also did not pay the fee, opens serious questions about equal treatment. GPTX believes SOS has an interest in administering the law fairly, so we BEG the SOS to defend the equal treatment of candidates and voter rights in the matters to which it is a party. We encourage the SOS to accede to the injunctive relief regarding the fees so that the law may be applied equally to all candidates who did not pay the fee without depriving voters of choices. GPTX prays that SOS, as a non-partisan government office, will defend our voter's rights to not be selectively targeted for deprivation of ballot access by asymmetrical partisan interests.

GPTX fails to understand how the comparatively minor interest of candidates facing a challenger who may not have paid a filing fee, exceeds the collective interest of voters to have choices on the ballot. We continue to believe that the imposition of the fee is an unconstitutional barrier to ballot access that privileges the rights of money over voter rights, but we recognize that we must abide by the state's implementation of the electoral code.