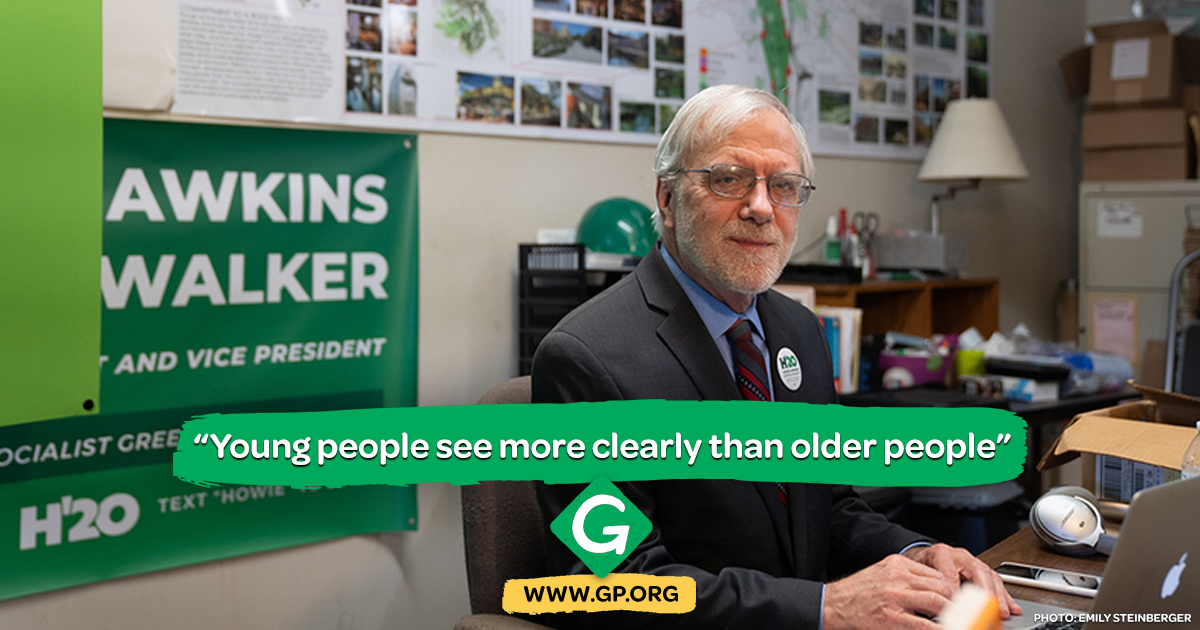 Syracuse presidential candidate Howie Hawkins expected the 2020 election to be a tough year for third parties. So when his Green Party campaign received less than 0.5% of the popular vote in New York state, he wasn’t surprised.

“(In 2016), there was a lot of dissatisfaction with the candidates, and a lot of progressives wanted to cast a protest vote for the Green Party,” Hawkins said. “But 2020 was a referendum on Trump.”

Syracuse University College of Law alumnus and Democrat Joe Biden won the presidential election on Saturday after securing victories in key battleground states, including Pennsylvania and Michigan. President Donald Trump continues to falsely dispute the results of the election.

Hawkins, the co-founder of the Green Party and a retired UPS employee who lives in Syracuse, said he was in a meeting with his campaign team when he heard about Biden’s victory. Unfazed by the news, he continued the meeting as normal.

This was Hawkins’ 25th campaign — and loss — for public office.

“It really didn’t divert us. We kept going through our agenda,” he said. “By that point, we assumed it would be Biden in office.”

Hawkins and his running mate, Angela Walker, received 0.2% of votes nationwide and 0.3 percent in New York, according to the Associated Press. The Green Party needed 130,000 votes or 2% of the total voter turnout in New York to appear on ballots in the state during next year’s election, after the state passed a stricter ballot access law in April. The Green Party will have to secure 45,000 signatures to remain on the ballot.

The party used to need only 50,000 votes to stay on the ballot, which is significantly fewer votes than the current threshold, Hawkins said.

Hawkins received fewer votes this election than 2016 Green Party candidate Jill Stein, who won 1% of the popular vote that year.

Hawkins attributes the Green Party’s losses in the 2020 election to two factors: a staunch commitment among progressives to remove Trump from office and the fact that Hawkins appeared on fewer ballots nationwide. The Green Party was on the ballot for 30 states this year, as opposed to 45 in 2016.

Hawkins believes many of his would-be voters chose Biden simply to get rid of Trump.

“Most progressives saw Biden as a vehicle to get rid of Trump, and Trump supporters saw Trump as a better guy for the economy,” he said. “It wasn’t about issues. It was all about Donald Trump, either for him or against him.”

Hawkins believes Biden’s moderate stance on some policy issues, as well as his efforts to appeal to conservative voters and politicians, will let down many progressive voters.

“A lot of progressives are going to be disappointed,” he said. “A honeymoon will be short, and then a lot of people are going to be looking back at the Greens and what we’re trying to do.”

As part of his platform, Hawkins advocated for a federal plan to dramatically reduce greenhouse gas emissions, and an economic Bill of Rights, which would guarantee rights to employment, health care, affordable housing and a stable income.

When the Green Party needed a candidate, Hawkins agreed to run because he was one of the few candidates in his party with the experience to run a large-scale campaign, he said.

Hawkins said he doesn’t plan to run for public office again, but may if party members ask him to. He would like to be a campaign manager for another party member.

“I have no definite plans,” Hawkins said. “I never planned to run 25 times. It’s really up to the Greens. I’m not saying no, but I’m not seeking anything. I’ll be involved, but whether I’m a candidate or not remains to be seen.”

Hawkins hopes to assist local Green Party candidates with their campaigns so that the party can gain ground through local elections. The main goal of Hawkins’ presidential campaign was to encourage more Green Party candidates to run for local office and to put issues on the public agenda that Democratic and Republican candidates usually ignore.

By 2024, Hawkins hopes to have more Green Party representatives in local office and possibly in the state Legislature. After this year’s election, he’s more confident that a higher number of Green Party members will run for office, he said.

Hawkins said he has received many messages from young people encouraging members of the party to keep running for office.

“Young people see more clearly than older people, who have kind of resigned themselves to the fact that we don’t have real solutions for the climate, in poverty, and economic opportunity in racism,” Hawkins said. “People, particularly teenagers, say, ‘Keep going, I want to vote for you, but I couldn’t this time.’ It just doubles your commitment when you hear all this encouragement.”