Hawkins releases 12 years of tax returns and asks, where are Trump's? 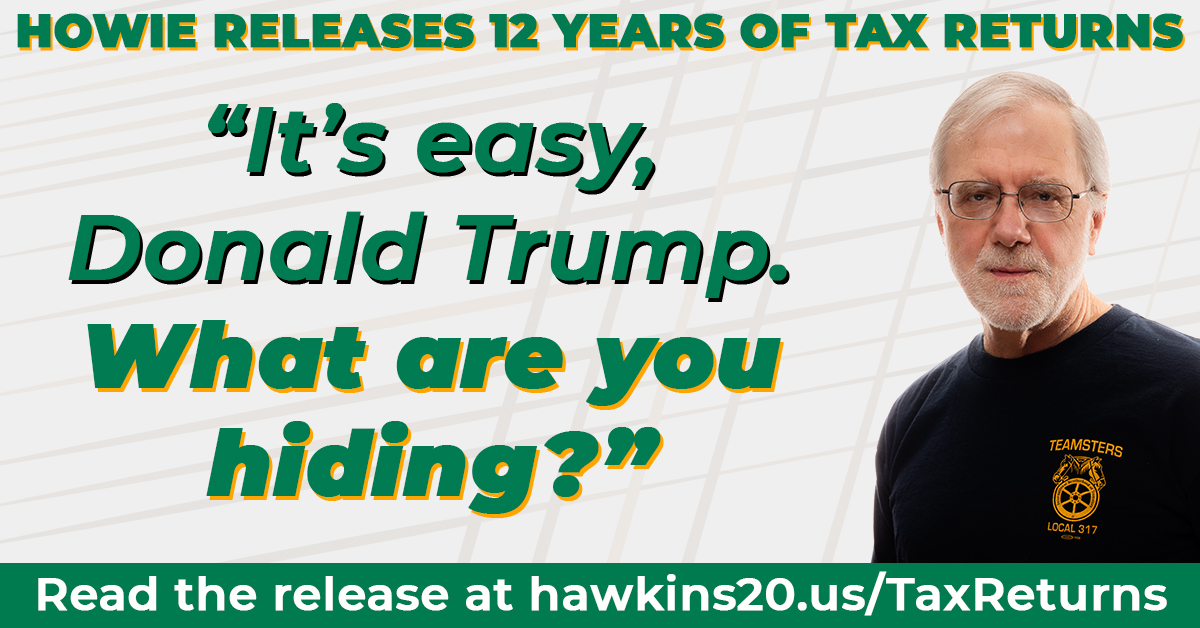 Hawkins also asked why the Democratic Chair of the House Ways and Means Committee, Richard Neal (D-MA), refuses to take advantage of a law passed by New York a year ago that enables Congress to access Trump's New York State tax returns, which closely follow the federal income tax forms in what they report.

"What are the Democrats hiding?" Hawkins asked. "They could get Trump on tax fraud like the Feds got Capone. The New York law means his tax returns are there for the taking. The Democrats are not standing up to Trump, they're sitting on their hands."

Journalists and law enforcement investigators are interested in Trump's tax returns because they suspect they will reveal, when checked against bank and insurance records, that Trump is guilty of bank fraud, insurance fraud, and tax fraud. Trump may not want to show his returns because they may show he is not as rich as he claims to be, he didn't pay taxes he owed, he donates little or nothing to charity, and he has extensive financial ties to Russians.

The sources of the cash that Trump obtained for property investments in the early 2000s, after decades of borrowing to purchase properties, has also raised suspicions that Trump raised his cash by laundering money through his properties from corrupt oligarchs in Russia, the Middle East, and Latin America.

Trump is the only major party presidential nominee since Watergate to refuse to release any past tax returns. A series of rulings by federal courts, including the US Supreme Court, have rejected Trump's claims that his tax records cannot be subpoenaed by congressional committees or Manhattan DA Cyrus Vance, Jr. But appeals by Trump and further proceedings in lower courts mean Trump's taxes are unlikely to be revealed before the November election.

Hawkins said, "It is not hard to figure why Trump is hiding his tax returns. But why are the Democrats not getting Trump's New York tax returns out to the public before the election?"

Hawkins own tax returns are not so interesting. They show a modest income from wages as a UPS Teamster truck unloader and, since he retired 2018, from pensions, as well as investment income from mutual funds.

In his last full year of work in 2017, his tax returns show that he earned $28,443 in wages, $83 in interest, $9,332 in dividends, and $43,438 in capital gains for a total income of $81,438. The capital gains came from Hawkins selling shares in a stock index mutual fund to buy shares in a bond index mutual fund in order to balance his retirement savings as he approached retirement. He paid $3,382 in federal income taxes.