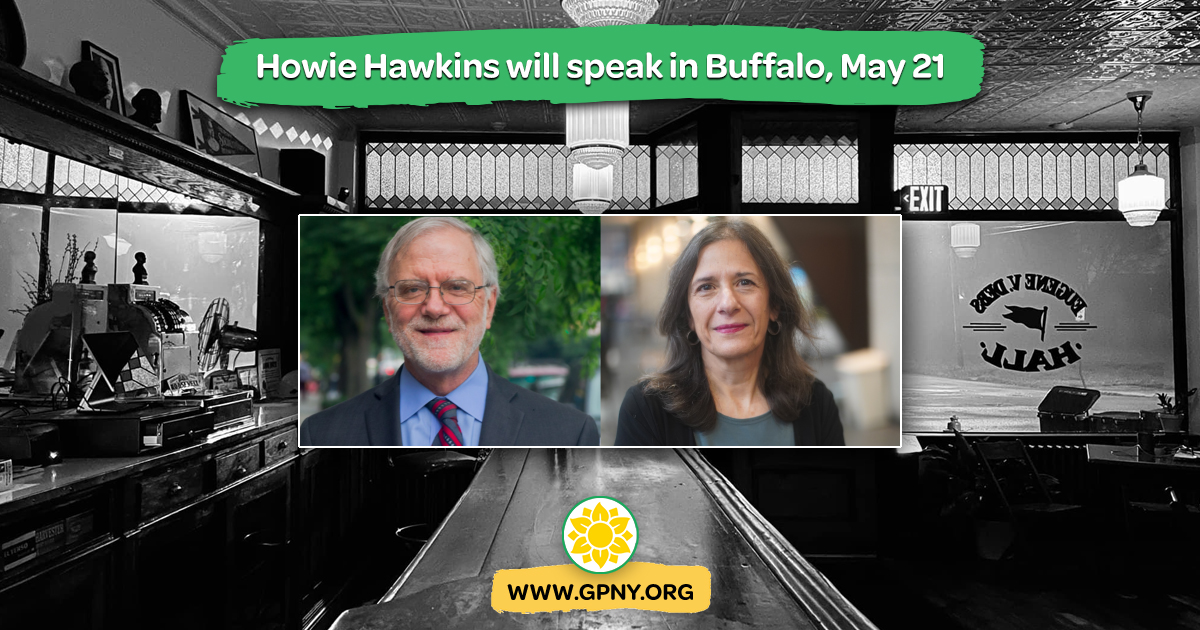 Howie Hawkins, the Green Party candidate for Governor of New York, will speak at the Eugene V. Debs Hall at 483 Peckham Street in Buffalo at 7 pm on Saturday, May 21.

Hawkins will propose measures to reverse the institutional and cultural racism that propagated the white racist terrorist attack on Buffalo’s Black community on May 14 as well as the longstanding systematic imposition of inequality, poverty, and violence on Black communities.

Buffalo and other upstate cities like Syracuse and Rochester are among the top ten cities in the nation in the rates of child and family poverty, with the highest rates in Black communities. Hawkins’ public safety platform starts with ending poverty, which he contends will do far more to reduce crime and violence in all communities than spending more on police and prisons.

Drawing on the legacy of Eugene V. Debs, Hawkins will make the case for why socialists should run their own candidates independent and opposed to the candidates of the pro-capitalist two major parties.

Hawkins’ ecosocialist platform features a Green New Deal for climate action and economic justice; the New York Health Act for a state-level Medicare-for-All program; and an Inclusive Democracy based on reasonable ballot access, ranked-choice voting for statewide offices, and proportional representation in the state legislature.

Hawkins is a retired Teamster from Syracuse who was the Green Party’s candidate for Governor in 2010, 2014, and 2018 in elections in which the Greens won enough votes to secure a ballot line for the next four year election cycle.

Because of a law passed in 2020, the Green Party lost its ballot line. The Green Party must now gather 45,000 good signatures in 42 days between April 19 and May 31 to secure a place on the ballot in 2022. Hawkins says it is the most difficult petition for independent candidates anywhere in the nation or the world.

The likely major party candidates will be a centrist Democrat, Gov. Kathy Hochul, and a far-right Republican, Lee Zeldin.

“If the Green Party ticket is not on the ballot, New York progressives will have no way to vote for stronger climate action, universal health care, and an anti-poverty and reparations program,” Hawkins said.