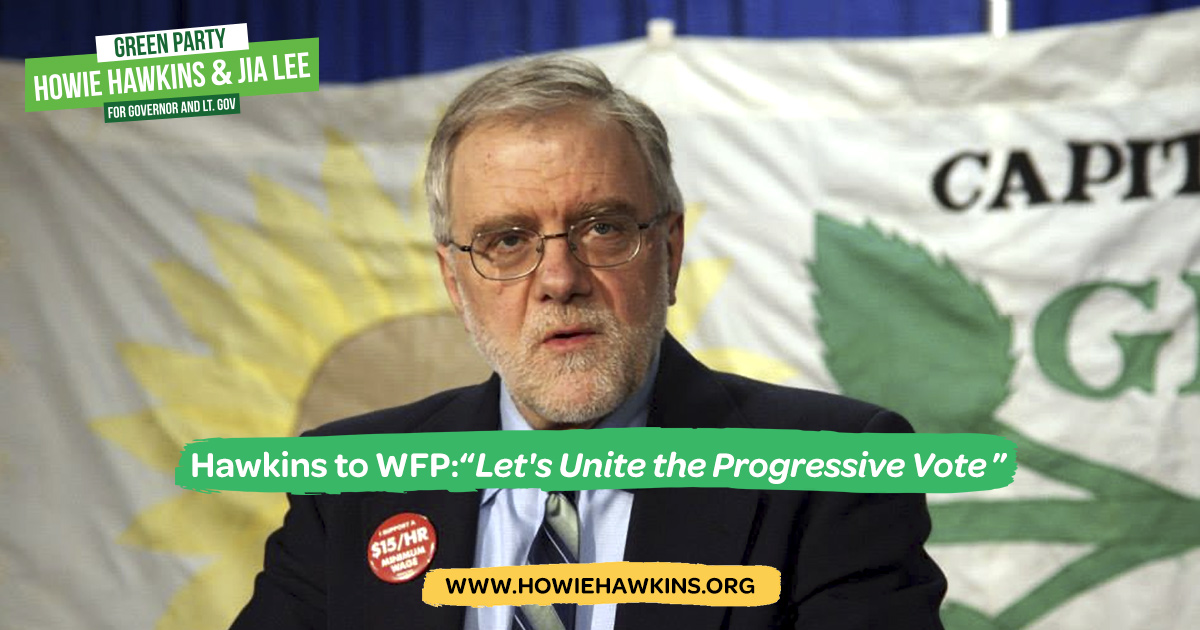 Howie Hawkins, the Green Party of New York nominee for Governor, said he would be open to creating a joint ticket with the Working Families Party to unite the progressive vote for governor.

Hawkins said he would be reaching out to the WFP co-chairs urging them to consider his offer. The WFP state committee is meeting Thursday night.

“We feel the pain of the WFP voters who can’t stand the thought of nominating Cuomo again. Our campaign is here to help. I am confident that running a unified left campaign will generate far more than the 50,000 votes both parties need to maintain ballot status,” Hawkins said.

“Running the Hawkins/Lee ticket jointly on the Green and Working Families ballot lines would electrify progressives who want unity. It would multiply the vote for the policies both parties support, including single-payer health care, 100% clean energy, affordable housing, fixing the MTA, fully-funded public schools, tuition-free public college, public campaign finance, bail abolition, and marijuana legalization. Win or lose, a big united vote for this agenda will compel the legislators and governor who are elected to act on our demands,” Hawkins said.

Hawkins finished 3rd in the 2014 gubernatorial election with 184,419 votes, compared to the 126,244 votes for Cuomo on the WFP line. Cynthia Nixon, the WFP nominee who apparently wants to get off the ballot, received a half-million votes in the recent Democratic primary.

The WFP is now debating who to put on their ballot line for governor. If they want to replace Nixon with someone else, they have to do so by next Wednesday.

The Green Party’s rules do not allow for cross-endorsements with corporate-backed parties, which they have considered the WFP to be because it routinely cross-endorses Democrats. Hawkins believes, however, that the party’s state committee would adopt a rule amendment to make an exception for this race if the WFP is willing to cross-endorse the Hawkins/Lee challenge to Cuomo.

Hawkins acknowledged that the WFP and the Greens differ on strategy. The WFP has focused on using Democratic primary challenges to centrist Democrats and WFP/Democratic fusion in general elections in order to push the Democratic Party in a more progressive direction. The Greens believe the left will have more power by running independent Green candidates whose votes the Democrats cannot take for granted.

Hawkins said the policy differences between the two parties are more a matter of degree than direction. For example, the Greens helped draft the NY Off Fossil Fuels bill for 100% clean energy and zero greenhouse gas emissions by 2030, while the WFP has supported the Climate and Community Protection Act that would reach those goals by 2050. Hawkins believes the two parties could easily hammer out a joint list of policy demands for the fall elections that the members of both parties, as well as progressive Democrats and independents, would enthusiastically vote for.