Hawkins/Walker announce Green Party on the ballot in Minnesota 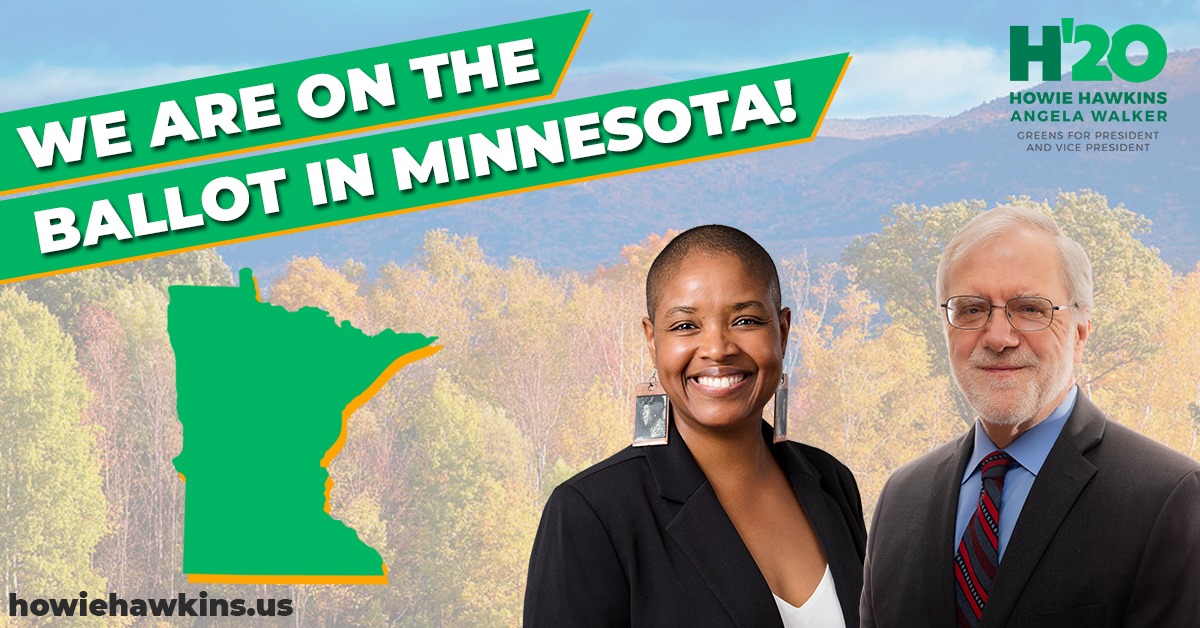 Yesterday, the Minnesota Secretary of State confirmed that the Green Party will be on the ballot in 2020. In addition, the Ohio Secretary of State confirmed in an email to Andrea Merida, the campaign manager, that "Howie Hawkins and Angela Walker will appear on the November 3, 2020 General Election Ballot as independent candidates for the offices of President and Vice President of the United States."

The Green Party of Minnesota was required to submit 2,000 valid signatures. On August 18, 4,945 signatures were submitted to be validated by the Secretary of State. They submitted a combination of electronic and paper petition signatures.

"We are pleased to be on the ballot in Minnesota. It is an important state with a long third party history. The Hawkins/Walker campaign will give people the opportunity to vote for a candidate who supports Medicare for all, the Green New Deal, community control of the police and an end to inequality," said Howie Hawkins, the Green Party nominee.

Hawkins/Walker have also been nominated by the Legal Marijuana Now Party. Hawkins has been labeled the "marijuana candidate for 2020," for his long term support for legal adult use of marijuana.

"It is time to make marijuana legal for adults as well as for medical use," said Hawkins. "The marijuana laws still result in more than six hundred thousand arrests each year disproportionately of people of color. It is time to end this injustice."

In Ohio, independent Richard Duncan withdrew his candidacy and his committee nominated Hawkins/Walker as replacement candidates.

Voters will be able to vote for the Hawkins/Walker campaign in 43 states plus the District of Columbia, and the campaign continues to gather signatures in five states. It will not be on the ballot in Nevada and South Dakota.