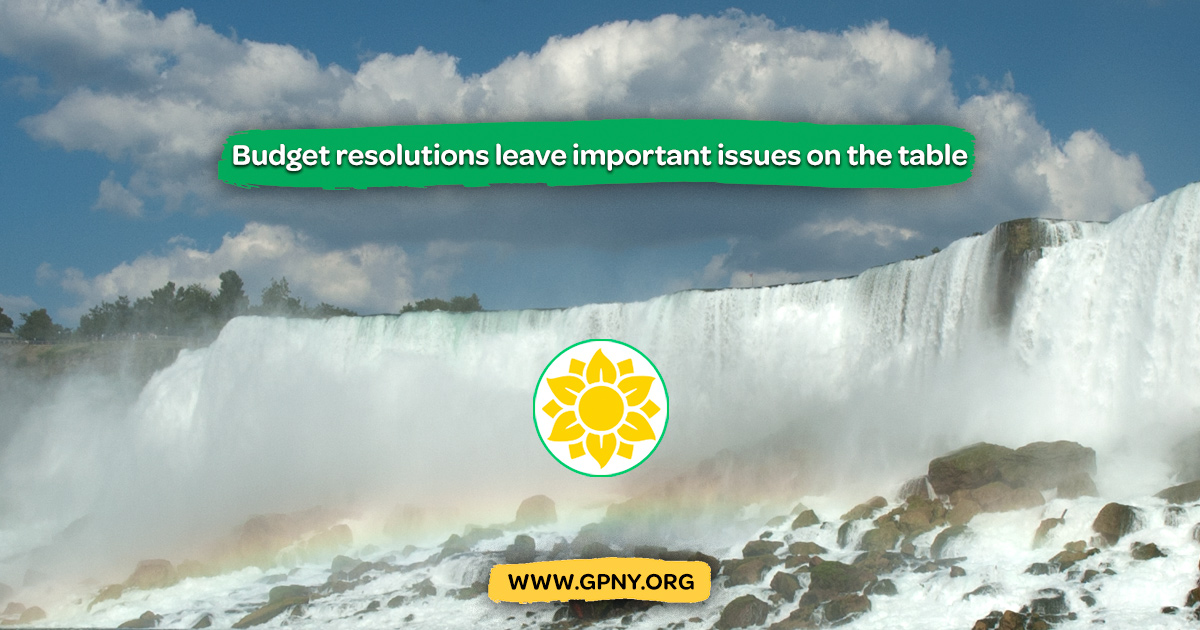 NEW YORK — Green Party officials said today that while there were some positives in the Assembly and Senate one-house budget resolutions, they did not move far enough or fast enough on critical issues such as healthcare, ending the drug war, and wealth inequality. Party officers said the Legislature needed to ensure it passed crucial legislation this session outside of the budget process, and that the party and its members would continue to press their agenda.

Instead of moving boldly, now that the Democrats are in total control of the State Legislature, the Assembly and Senate budget resolutions leave important issues on the table. Single payer healthcare, for instance, has overwhelming support among the public and even a majority of Democratic state legislators, yet it still faces an uphill struggle and was not introduced in the budget.

The Green Party faulted the Governor and legislative leaders for yet another delay in legalizing marijuana as neighboring states have done. “The resolutions do little to address the defects in the governor's marijuana legalization proposal, including the lack of home-grow options, and requiring organic and non-GMO cannabis. We need to use the program and its revenue to help victims of the drug war, both at the community level and among individuals who were the victims of the state’s mass incarceration efforts,” said party co-chair Gloria Mattera.

“While the Assembly budget adds higher tax brackets for the wealthy, it falls far short of making the rich pay their fair share. The Assembly continues to rebate billions from the stock transfer tax to Wall Street traders, and continues the massive public subsidy of fossil fuels by failing to enact a carbon tax to make polluters pay for the health care and other damages they cause,” said party co-chair Peter LaVenia. “Far worse is the Senate's agreement with the Governor's budget to make the property tax cap permanent. Their resolution also includes no adjustments to make the income tax even minimally more progressive,” added LaVenia.

Congestion pricing? The MTA's infrastructure and budget crisis? Not in the Assembly budget resolution.

”The Assembly does not add on a fee for single use bags to improve the Governor’s belated call for a plastic bag ban. At least the Senate resolution proposes the single-use plastic bag ban plus fees on paper bags that the Green Party and environmental groups have long advocated. We hope it is included in the finished budget,” said Mattera.

Necessary electoral reforms also get short shrift here, partially because the Legislature passed the easier reform package early in session. Full public campaign financing, like Maine or Arizona, should be on the docket but the Legislature is content with the far weaker matching funds plan that unsurprisingly favors established parties and incumbents.

The Senate resolution even rejects simple reforms provided in the Executive budget like banning legislative staff from working on their legislator's campaigns and increasing the lobbying ban for former state employees from 2 to 5 years. While GPNY would prefer a lifetime ban, the Senate seems to prefer weaker regulations to address this persistent good government problem.

“The budgets produced by the Governor, the Assembly and the Senate show that even with one-party control, Albany is not able to deliver the progressive reforms that New Yorkers are demanding,” concluded Mattera.