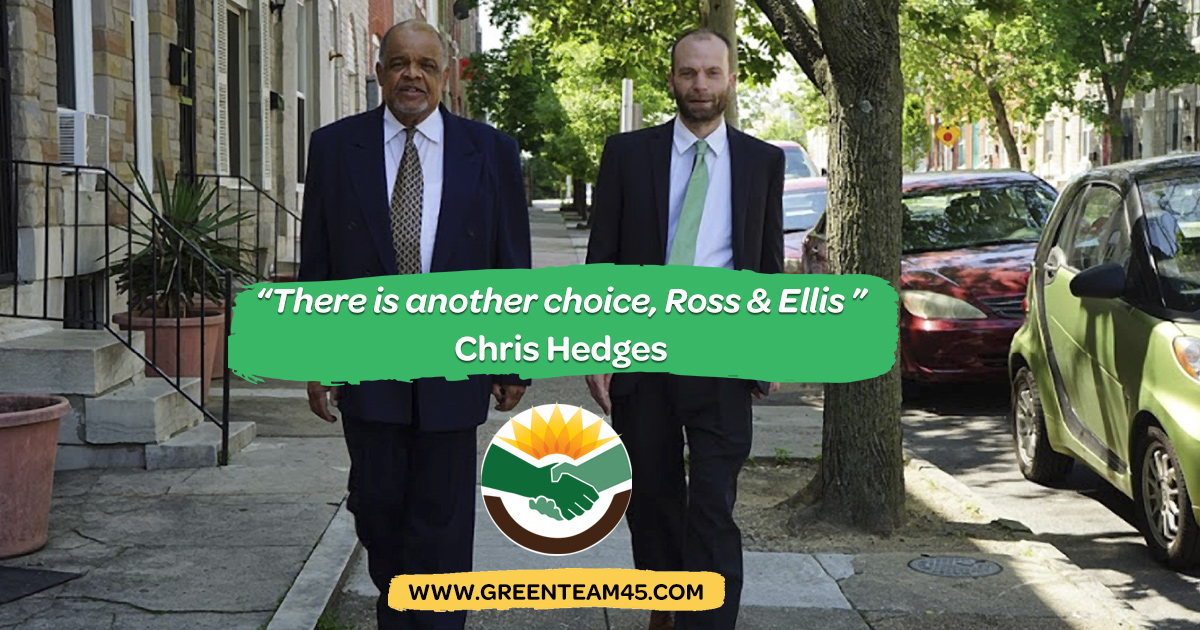 The City of Baltimore, like many other cities in the United States, has not been well served by the Democratic or Republican Parties. The Democrats have been in complete control of every office in city politics for more than 50 years, an era of consistent downward decline. We cannot expect these parties that are indebted to Wall Street, K Street and developers to serve the interests of the people.

It is essential that a party and candidates that represent the interests of the people build political power to challenge these failed institutions. The Democrats have worked hard to suppress any party from rising. In Baltimore the Republican Party is a non-party, but the Green Party is rising to be the second party in the city.

I am writing to endorse Glenn Ross and Andy Ellis, running for the Maryland House of Delegates in District 45 in Baltimore. These are the types of people who should be in office. Glenn is a long-time community activist and organizer known for his toxic tour, which highlights how government has allowed business to poison black communities. Andy has been a mentor, teacher and ally to young African Americans trying to start businesses and training them as a debate coach that has won national tournaments, and then gone on to advocate for themselves and their communities in Baltimore, Annapolis and DC.

If people get behind their campaigns we could wake up the day after the election and read that the corrupt Democratic Majority Leaders and a Baltimore City machine candidate have been defeated by two Greens. That would be a victory that would not only shake the calcified Baltimore City Democratic Party but be heard throughout the nation. It would mean a viable alternative to the Democratic Party has developed.

This would open the thinking of voters. They do not have to vote for candidates they do not agree with and don't like -- Democrats who work for big business. There is another choice, voting for what you want. That would be a dramatic and refreshing change in politics. A victory like Andy and Glenn are working for -- out every day knocking on doors of voters -- would be contagious. Suddenly people would have hope that they can correct the direction of the country, break from corporate power and corruption and elect people who are allied with the people.

Having a voice in state government that is not part of the duopoly of corporate parties will make all the difference. The people of District 45 are understanding that electing the same people will get the same result. If they want change they need to vote for change. Andy and Glenn give the people the chance to vote for the future they want. They are a hope for all of us.